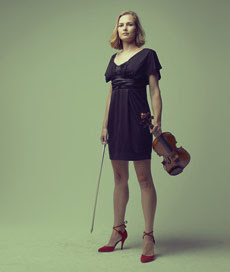 This was a very sophisticated concert. One that was especially wonderful for the real aficionado’s of music. The rapturous attention of the audience for all three pieces that was captured by the orchestra, was remarkable. This is music “that was valued above all for its perceived intrinsic, purely ‘musical’, qualities … it strove to be elevated, refined, and sublime, conveying aesthetic values” …an “exemplary form of serious music”. In the program notes Peter Tregar explains the origin of the term ‘chamber music’. “The term has its origin in descriptions of music written for performance under domestic circumstances or in a drawing-room or ‘chamber’ before an audience of a limited size…” He goes on to say “Today, however, chamber music is rarely heard (perhaps lamentably) in such circumstances, and even in early 19th century Vienna it was becoming increasingly common to hear chamber works such as string quartets and piano trios as part of public subscription concerts. It is more accurate, then, to define chamber music as first and foremost a type of music that is composed using intimate musical resources but with high aesthetic ambition. Above all, chamber music that uses the possibility of close dialogue between a small number of solo instruments to foreground the importance of ‘pure’ musical argument.”

The “high aesthetic ambition” of this concert had its apotheosis in the performance of the Brahms Clarinet Quintet. The intensely gentle textual arrangement of musical interplay between the scored notes was visibly personified by the glorious interaction between the players. The subtle support to the guest clarinet amongst the family of the ‘brothers and sisters’ of the ACO orchestra was an assuring body and instrument language that lifted the experience of listening to a stratosphere of delicate rarity. My eyes equipped my ears to listen. What I could see helped me to hear accurately. There was “a close dialogue” between instruments that allowed me to be an active part of the observation of ‘musical argument’. Now, I am fairly, relatively, ignorant about music and despite the lofty ambition of the chamber music genre, I became entranced and transfixed.

The Schumann was an appetiser or, in my case, ‘the trainer’, the teacher, to how to listen to this kind of music. The Beethoven, that followed, continued my learning habits and quelled me to pay attention. I could see and hear the Beethoven musical arguments. It was a lesson that gave me the proper entrance for the Brahms, which was, in my experience, sublimely played.

The use of the copies of ‘period’ instruments by the three guests was a bonus. The sound that they created amongst the strings was curious and deeply melancholic to my sensibilities. Craig Hill and his clarinet playing – gratifying to hear.

This concert was a tough one for me, the music, a little too rarefied in form, but as usual, the rewards that I reaped from the musicianship of this orchestra took me to places that expanded my presence in the world. The Pitt St block and the Martin Place precinct always have such a ‘romantic’ aura when I leave the ACO concerts, no matter the weather. The street cleaners, hosing down the plaza, never meant more in metaphor for me. A ‘drug’ worth the time and money spent to experience.
Posted by Editor at 10:21 PM

As one of the spellbound (and I'm not a regular ACO-goer), I totally agree. I was transfixed in a bipolar state of absolute attention to detail while at the same time in a meditative trance, and reconciling both states defies me still, in the world and out of the world at the same time.

Thanks for blogging on it.