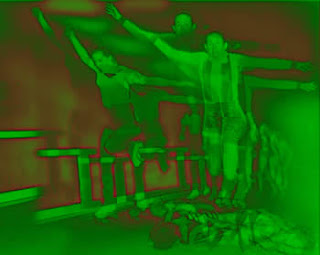 Bump Projects in association with the Sydney Roller Derby League, presents BLOODBATH at the Horden Pavillion.

"BLOODBATH is a collaborative distributed artwork by Bump Projects in association with the Sydney Roller Derby League. BLOODBATH features five artists with recognised track works in new media, data visualisation, mediated performance and work with embodiment and violence. In the Horden Pavillion, Sydney, at an all girl flat track roller derby game, sensors on the helmets of players feed data to the five artworks, generating digital elaborations of the moves and collisions on track."

The five artists Linda Dement, Nancy Mauro-Flude, Kate Richards, Francesca da Rimini and Sarah Waterson have programmed the data equipment to achieve various impacts live on screen. The equipment was set up for the first match between 'trainer' teams: The Pistola Cholas V's The Smackdown Sallies. Only some of the players were 'hooked up' for art. On screens set up beside the scoreboard above the commentary box the work was explored for us all to see to varying degrees of success. The impact as art in the environment of the 'track' with the fans was unhappily minimal. It was not easily apparent to ascertain what was going on. So as an Artworks pilgrimage the session was mostly a perusal of the potential of the investigation not yet fully kinetic. Underwhelming as yet.

Obstensibly then to view the Artwork BLOODBATH, I was also, obviously, to my friends, and a whole bunch of us went, obviously there, for the Roller Derby. Winter Saturday afternoons at home in time past (the sixties) with my mum and sisters, with home made donuts, (the stink of oil was great to inhale, and retrospectively, I missed it on Saturday night!), watching the American Roller Derby League matches on Television (sponsored by Nock and Kirby's featuring Joe the Gadgetman) was what I went to nostalgically to imbibe in.

The first match was tame and for 'trainers'. The second match of the Double Header between THE ASSASSINS, The Sydney Team and VICE CITY ROLLERS, the Canberra Team, with names like Apollonia Thunderpussy, Trippy Longstockings, Bambi Von Smash'er, and my two personal heroines: Cassatrophic and Short Stop was nail bitingly thrilling. These girls are out to play and to win. Courage, guts and tactics galore. Best because it was a close near draw score for the whole of the night. Theatre sports. The four or five thousand fans, including, especially us, had an artful and totally interactive time, "GO Canberra" and despite losing, just, to the Sydney team it was worth it. My nostalgic need was quenched and more parlously, my appetite wetted. I want to go again.

I won't need the five artists to give me the excuse, but I'll be happy to go to BLOODBATH 2 just to see the artworks evolving and to cheer for the teams and those fabulous girls.

Saturday night entertainment that had me up on my feet cheering, 'GO, CASSA, GO." " GET HER SHORT STOP, GET HER" YEAH!!!!!

WWW.SYDNEYROLLERDERBY.COM
Posted by Editor at 12:16 AM