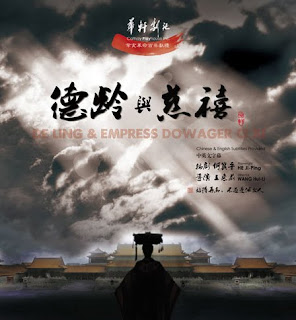 The CATHAY PLAYHOUSE is a mostly non-professional theatre organisation (95%). I decided to write about my experience with this company because it represents a part of our community that does not have much exposure or encouragement outside its own cultural population. According to their mission statement as presented in the program notes, CATHAY PLAYHOUSE aims to present exceptional Mandarin drama as a way to promote Chinese culture as a part of Australia’s Multi-cultural society. More movingly its Vision statement is: “To diffuse art and guard our dreams.”

Forty-two participants including the cast of performers and the backstage crew. Twenty administration staff to support the project, and from the photographs of each, presented in the program, essentially a very young and vital collection of dedicated individuals. Congratulations.

DE LING & EMPRESS DOWAGER CI XI by He JI-Ping is an historical/domestic/epic set in the Court of the Empress Dowager Ci Xi and Emperor Guang Xu. This is in the time just before the ascendancy of the child Pu Yi, the puppet Emperor for the Japanese, before the final collapse of the Manchu Dynasty, who most of us would recall from the Bertolucci feature film, THE LAST EMPEREOR (1987). So, the Boxer Rebellion and another film feature 55 Days At Peking (1963, Flora Robson as the Dowager, Robert Helpmann, Charlton Heston, Ava Gardner and David Niven) may guide you to placing the context. Hollywood ever useful!!!!

Like the last mentioned film the writing is based on fact but has a strong emphasis on the romantic fictionalising of the events. In this case it tells the story of the return of De Ling and her family, from a European ambassadorial assignment/tour, and her consequential influence on the court, especially on the Empress Dowager. The principle theme, in the big historical arena, is the struggle to incorporate the modern world into the thinking and actions of the Qing Court in the face of an entrenched and complex traditional structure within the Forbidden City. This is the function of the De Ling character to quarrel and outwit the young Empress and the eunuch functionaries to lead China to a successful and open future. The secondary theme, and the melodramatic one, that we are all familiar with in the telling of these stories as entertainment, is the underlying personal angst of the Empress Dowager in having to sacrifice her personal life for the public persona (remember the recent Cate Blanchett creation in the two Elizabeth I films?) The lesson that we learn is that Wealth or Power are no compensation if there is no Love as well. Love is the truest possession.

I decided to record this experience because I was asked to sit for three and a quarter hours, without intermission, and watch a play unravel in Mandarin, with a sub-titled screen, and I did not get bored. I AND MY COMPANION DID NOT GET BORED!!!! I did not even feel the least bit restless and was essentially enthralled by the melodramatic machinations of the many characters in the court. I sat with an attention that I could not necessarily, continuously muster in THE WAR OF THE ROSES, for instance. True, these were stock characters, familiar to both film and theatre audiences, as was the plotting devices, but all the more welcoming because the plot organisation set up one’s appetites for the inevitable confrontations with this knowledge lodged in your cultural experiences before hand. It was a very enjoyable night in the theatre – one that I would have endured again. More so then some of the recent work that I have had to experience in the professional theatre.

Like the recent AUGUST:OSAGE COUNTY or the Melbourne Theatre Company’s RICHARD III this was an engaging time, well spent. The glow of a well-told story wreathed us as we staggered to our taxi.

Looking at some of the response I have had to the Sydney Theatre Company’s presentation of THE TRIAL, it seems attention should be considered to the offered repertoire. Variety is important.

The acting in the company was mostly of a high order. Especially Eugenia LIANG Kun-Yan as the Empress Dowager, dignity and grief and power right through to the curtain call; SK ZHANG Shi-Kai; Adam SUN Qiao; Gordon GUO Zi-Qing; Cameo LOU Yun; Lucy HUANG Qian-Yun as De Ling and delightfully Shirley SONG Xue-Ni as the flustering cook/servant. Many others to mention as well. The Design elements, specially the costumes and the furniture/props were excellent in establishing the many changes in location (Gordon GUO Zi-Qing, also one of the actors).

The credit for the success of the evening must go to the director WANG Hui-Li. Graduating from the Shanghai Theatre Academy China in 1957, Ms WANG Hui-Li arrived in Australia in 1989 and established ‘Sydney Australian Chinese Children Playhouse’ in 1994. She has worked with the CATHAY PLAYHOUSE since 2005. This is a very assured and highly skilled story-teller.

In a week when one is enlightened by NAMATJIRA, and SEVEN KILOMETRES NORTH-EAST the joy of meeting another part of the multi-cultural fabric of our art’s community and having a very satisfactory night, that became more than one of duty and respect, was a gift.

Last week I also attended the MacDonald High School’s production of the full length ballet DON QUIXOTE out at Riverside, Parramatta and also had a good time.

“TO DIFFUSE ART AND GUARD OUR DREAMS”, indeed.
Posted by Editor at 10:52 PM

Thank you Kevin for this insightful reivew. As an audience attending Cathay's stage play for some years I am actually thrilled knowing there has literally a review of its work by someone local. It's as an indicator of the progress this group of young people have made. I myself have witnessed their skills bettering and aim at higher. I enjoy their performance and wish you would like to join me and many others to foot for their work in the years to come.

Thank you so much for writing the comments on our annual production, your words means alot, especially for people who work in backstage and work behind the whole organization.