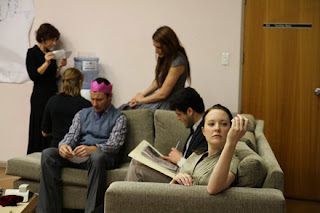 Pearly Productions and Griffin Independent present THE PIGEONS by David Gieselmann at the SBW Stables Theatre.

A German comedy seems to some of us an oxymoron. But one would have to be a moron not to have a few good laughs at THE PIGEONS by David Giselmann at the SBW Stables. This is the English language premiere.

A short 65 minute character driven farce the translation by Maja Zade is truly hilarious. Farce is difficult. Verbal farce is even more difficult to sustain. But what Mr Giselmann has managed is to succinctly put nine characters in the same space in two locations, quickly reveal the comic flaw in each of the characters (e.g. a psychiatrist who cannot remember one patient from another, a pathological office bully, a wife who longs and is desperately determined to live in Italy) and then at breakneck speed have them all meet and collide in mounting frenzied needs resulting in accumulating misunderstandings and identity chaos.

In a simple and neat design that encapsulates a carpeted living room and office location, the eight actors dressed in contemporary clothing, but in a trendy conceit of bare feet (why?), (Designer, Renee Mulder) wait on stage, for the audience to arrive and then at breakneck speed begin a hurtling non-stop verbal welter race of comedy. Like Satre's famous play NO EXIT, the Director Sarah Giles suggests our extended social groups are our hell, which we are trapped to endure. There are no exits in this production, just a retreat to the black wall.

The cast has been well staged and drilled for speed, if not subtleties of characterisation. A fine team of actors: Lyn Pierse, Laurence Coy, Tom Stokes, Ashley Ricardo, Garth Holcombe, Fayssal Bazzi, Paige Gardiner and Clare Blumer. However, not all the characterisations were believable. Some actors were still erring on achieving the craft mechanics of the verbal style and pace demanded by the director. Sometimes the action of comic technique dominated the night over truthfulness of character recovery and/or insight. I saw actors at work, sometimes.

I, too, had difficulties with the sound volume of the production. It began at a loud volume and perforce of the action of the verbal hijinx just continued to get louder. The accumulative volume of the cast ricocheted uncomfortably around that tiny space. The character, Natalie Voss (Ashley Ricardo) suffers from an uncontrollable temper, which is expressed by enraged shouting. There is some difficulty for this actress if the other actors find that shouting is also their response to their character's dilemmas. It means that Ms Voss/Ricardo must just get louder. The noise level made it uncomfortable for me to truly enjoy the production. It, of course, could just have been opening night jitters.

Laurence Coy as the catalyst to the events of the play, Robert Bertrand, wanting to disappear; Garth Holcombe as the paranoid deputy office manager, Holger Voss, suffering from corporate office bullying and his angry, angry shouting wife, Natalie, played brilliantly by Ashley Ricardo; and the constantly bewildered absent minded psychiatrist, Dr Eric Asendorf, played by Fayssal Bazzi lead confidently, the rest of the company and the audience a riotous and merry dance indeed.

It is a relief to go to the theatre and be handed the possibility of a jolly good, non-stop laugh. Relatively rare these days. Where is Mr Ayckbourne on our stages? Dare I dream of some mindless bourgeois, but damned funny fare from someone like Feydeau?

I should declare that inside this comedy, THE PIGEONS, there are, still, some serious social issues been bandied about, but in a very sweetly coated form.

How surprising, then, to have a comic play from a German playwright, who is embedded in the Schaubuhne theatre in Berlin, where several of our prolific young directors have taken their inspiration, which we have witnessed over the last few years, here, and found the work to be mostly, dour, humourless and earnest.
More power to Mr Giselmann and to his English translator, Maja Zade then.

When THE PIGEONS opened at the Schaubuhne last year, the BERLINER ZEITUNG wrote: "We have just experienced the funniest evening in the theatre this season." It is debatable in the Sydney scheme of things but I suggest you give it an airing. Just be ready for the volume.
Posted by Editor at 11:27 PM

I saw this on opening night as well and I agree with what you say Kevin. I enjoyed the performances and the relentless pace was delightful at first but once you realised that it was going to continue that way and not change it made you sit back and lose involvement in the piece. The cast are doing terrific work and there are highlights but it is in danger of being a one-note samba, and a shrill one at that. I hope that it was just opening night nerves too and that they settle down to find the subtleties that are in the play. It will then be an even more enjoyable and rewarding night in the theatre. I do encourage viewing as is though, even if it stays that way. We get to see bold choices played strongly rarely in this careful city and these artists deserve support for their commitment and the sheer comedic pulse they bring to the play.

Mr Jackson is a tad harsh on the speed and volume required to make PIGEONS fly. I attended the second performance and while one might quibble over the occasional overplayed moment (for the space) the cast are most definitely well in control of the lunacy. I highly recommend attendance. It sure is funny but it is also pretty damn close to a bone or two. Sarah Giles and the gang deserve a gong each. Recommend also keeping an eye on renovations at The Stables: stylish, functional and cool. Capital works at their best. PS While the show is listed at 65 mins it is now running in the high 50's and the cast are determined to get it down to the mid-50's: that will keep audiences well and wide awake! Check it out. NB All Griffin evening performances begin at 7.00pm. TLJ