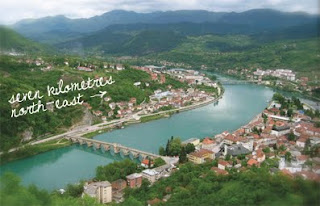 Ms Vercoe tells us of visiting a small city, Visegrad, in the Republika Srpska, and being mesmerized by the beauty of the Mehmed Pasa Sokolovic, the Ottoman Bridge, built in 1571, over the river Drina, between the east and west, in 2008. Needing accommodation, checking out her guidebook, it suggested that the Visegrad Vlas Spa Resort, seven kilometres north-east is the best option. It is modest but comfortabe and was a relaxing choice. Coffee, cigarettes, conversations and slivovitz galore.

Later on returning home, she discovers that the Spa Resort was once notorious as a prison for the torture, rape and killing of many women in the terrible wars of the 1990's and that the bridge had been a site for a genocidal murder of local citizens, their bodies being thrown into the swiftly moving river.

Returning to the Balkans, Ms Vercoe attempts to investigate the truths of this history. Denial, silence was the response mostly met. This performance built from verbatim notes of interviews, guidebooks, War Crime Reports, quotes from the Nobel Prize winning author Ivo Andric, the video images filmed by the artist herself, using music of the country, is a typical construct of theatre practice that Version 1.0 has made vigorously famous. This product is different to the other work of this company in that it feels to be a very personal odyssey of and for Ms Vercoe.

Ms Vercoe is her usual vivaciously intelligent self, physically and vocally in charge of her material and draws us into her sphere of pre-occupation effortlessly. Wonderfully assisted by the Video Artist, Sean Bacon, who projects the home made images of Ms Vercoe's onto the small theatre's back wall and onto the symbolic washing hanging on the clothes lines of the village people, designed cunningly above the floor space, who, thus, it suggests, simply go about ordinary lives in an historically extraordinary place.

The lighting (Emma Lockhart-Wilson) is sufficient to focus the many devisings of Ms Vercoe as she creates activity to assist our attention to her story: the making and sharing of coffee over a mini heating Bunsen burner, the illustration of the famous bridge drawn dexterously with coffee grains, the frenzied, bewildered, sometimes faltering dance imitation of an elder citizen, amongst others. All of it haunted by the live performance of Sladjana Hodzic (former conductor of Sarajevo City Choir) singing songs in the language of the region.

The shock and the zeal of Ms Vercoe's experience is truly palpable and she is, mostly, in control of her emotions. The questions that she asks herself, us, perforce of the witnessing of the performance, that are posed in some of the promotional material for the play:

1." Is it wrong to smother its (Visegrad) horrific past in order to move forward and survive?"

2. "And what are our responsibilities as tourists?" hang in the air.

Ms Vercoe talks of the notion of Thanatourism (from the Greek word Death and uses Gallipoli and the former Nazi death camps as examples.) It seemed to me that this small city Visegrad and Resort had attempted to not trade on its awful history but rather on its present natural beauty. To remember this horror, even to memorialise it might draw the thana-tourist rather than the tourist, which Ms Vercoe was on her first visit. The first question is answered. Yes, in this instance, it seems.

So on to her second question: what is her responsibility as an educated tourist? That is the problem. Ms Vercoe's personal sense of grief or outrage and her need to make public what that community has decided to place in denial and amnesia to survive becomes by her telling this story public and to the conscious fore. Is that proper, fair, or even her business?

Having seen NAMATJIRA the night before at Belvoir, and the gained sense of shameful history that the bureaucracy of Australia had burdened him, an Aboriginal man, with, I could not help but reflect and wonder that the Old Fitzroy Theatre standing in the suburb of Woollomooloo, that we were sitting in, might have a history of possible murder, genocide, torture and rape. What is this building's history? What is this ground and/or surrounding ground's history? Has it been ‘un-memorialised’ to allow the city to move on and survive? Rather as an outsider in the country of Bosnia-Herzegovina researching their history, maybe investigating our history would be more pertinent, and this question that Ms Vercoe poses, more relevant.

The fearful observation that haunted me when I walked into the Pantheon in Rome and the power of the ghosts or spirits of the building's history struck me with trepidation as no other building has. If these walls could speak, what would they tell me? As for the 9/11 site or the Nazi camps of Europe I have just declined to visit though conscious of their existence and their meaning. So, probably the whole of the Balkans, I would not visit, no matter their fabled beauty and hospitality, which Ms Vercoe is clearly besotted with and aesthetically drawn too.

This is where, although impressed with the usual methods and techniques of the company VERSION1.0, and the gifts of Ms Vercoe, I felt that this work was too personal (and too long) to give it the usual powerful distancing that VERSION 1.0 usually achieves. The very personal, and soon to be repeated, at Belvoir in November, THE BOUGAINVILLE PHOTOPLAY PROJECT by Paul Dwyer, presented in this theatre last year, had more accumulative power and residual consequence in my political post performance ruminations than "seven kilometres north-east."

As usual, provocative, and still, some of the best contemporary political theatre been made in Sydney (Australia). I recommend it with reservations. Discussion should happen in the bar afterwards, at the very least.
Posted by Editor at 5:20 PM

Ms Vercoe doesn't need to be do the usual parochial thing and only do an Australian story. We may be an island, but we aren't separated from the rest of humanity. (Boat people anyone?)

Surely Mr Jackson you can recognise the universal in the local.

I wasn't concerned with this piece's content. It was interesting shocking and of universal significance.
Perhaps it was for me an issue with the artists perspective. The assumption that she as an artist is at the centre of this work is acceptable but ther assuming she was at the centre of the story and the history as well is a bit iffy.
It resulted in moments that felt a bit indulgent and heavy handed. Surprising in contrast to the delicate and heartbreaking beauty of Dwyers piece.