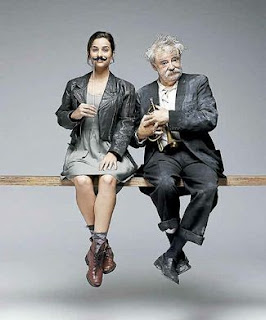 Bell Shakespeare presents TWELFTH NIGHT by William Shakespeare in the Playhouse at the Sydney Opera House.

TWELFTH NIGHT is the last of Shakespeare's comedies and it precedes the appearance of HAMLET.

In an essay by Stanley Wells on John Barton's production of TWELFTH NIGHT - my first remembered experience of this play, a magical one at the old Theatre Royal, in tandem with Trevor Nunn's THE WINTER'S TALE starring Judi Dench as Viola and Hermione/Perdita- (Manchester University press,1976):

"HAMLET is one of the most controversial of Shakespeare's plays. It has been endlessly discussed, and poses major interpretative problems. TWELFTH NIGHT has provoked less dissension. As with many of the comedies, there is general agreement about the broad lines along which the play should be interpreted. Disputes are about matters of balance,emphasis and degree, especially about the balance between comedy and seriousness. To what extent, if at all, should Orsino be satirically presented? Should Feste be primarily an entertainer, or should the actor suggest in him the sadness attributed to those possessed of perfect knowledge? Should the portrayal of Olivia emphasize the aristocratic head of a household or the susceptible young girl? And, perhaps, most dominant in the questions asked about the play's characters, how seriously should we take Malvolio's plight? Is it right that he should create, as,150 years ago, Charles Lamb said that Bensley created, a "kind of tragic interest"? Or should the performance be cooler, more distanced, more critical? More general interpretative questions that might be asked about the play concern the balance in it of romance and realism, of idealized love and drunken revelry, of wise folly and foolish wit, of self-control and relaxation, of love songs and songs of good life."

The Bell Shakespeare production under the Direction of Lee Lewis decidedly opts for an overly robust comic interpretation although it still steers an often moving balance between romance and realism, love and drunken revelry - mostly, not always, the drunken revelry under the bombast of Mr Booth as Sir Toby Belch (or, based around this performance: Sir Toby Bellow), too often drowning out the contrasts - and wise folly, beautifully delivered by Max Cullen as Feste, and foolish wit, demonstrated especially by Brett Hill as Maria.

With a reduced cast of seven actors, which only has one woman, that is Andrea Demetriades as Viola, in the well worn tradition of accessible Shakespeare by the Bell Company, we have a rambunctious comic "piss take" of a great deal of the play. It is in modern dress and has, within the context of the production's framing device, access to many contemporary ' tools' of comic invention. Add to the recipe of ingredients, multiple role playing, that demands gender bending, which is often hilarious in its small cast needs, and crowns a comic climax, in a moment of bewildering double playing, where the actor (Adam Booth) impersonating Sir Toby Belch is required to switch roles and engage himself as Sebastian. Much hugger muggering going on! There are, of course, losses in this comic pell mell point of interpretation and the final moments of Malvolio's humiliation is disturbingly pushed askew when Ben Wood, as Malvolio, as he exits, swearing revenge, gives the triumphant lovers and their parties some contemporary improvisationary retort and "the finger". A moment when vulgarity seemed to be unnecessarily enthroned.

This production begins in darkness as seven blackened bushfire survivors exhaustedly stagger into a community hall. In the space they find some emergency lighting equipment and a television set, that fortunately has an electrical resource, that conveniently displays a television news report of the tragedy they know is unfolding outside (the Victorian fire disaster).They are in shock and it becomes evident that the young woman, of the party, is in grave concern for a brother missing, lost outside.

In the centre of this refuge is a mountain of second hand clothes surrounded by other debris that a charitable organisation might have in storage (Set Design: Anna Tregloan). An older man finds an old shabby book that is WILLIAM SHAKESPEARE'S COLLECTED WORKS. He idly begins to read the opening to TWELFTH NIGHT and gradually the survivors begin to role play and enact the comedy. It becomes a distraction, momentarily, to the terrible predicament they are in. Sometimes during the proceedings the real world realises itself, intrudes, and particularly the connections between the young female fire-fighter/Viola (Andrea Demetriades) and her lost brother and that of Viola's, Sebastian, manifest tragically.

It is this external device, to the written play, of the director, that creates most of the effective moments of emotion in this performance of the play. That it is the framing device rather than the possible pathos within this great play of comic autumnal love and death and final restoration that is used to achieve this, is a weakness in the production of this TWELFTH NIGHT. It feels as if history as being sentimentally appropriated as a substitute to the textual resource that Shakespeare provides, that the overt comic work of the production has, relatively stifled. It feels like an intellectual imposition that does not trust the play or has fully investigated the dramatic potential available, textually, in it. The recent Russian production in the Sydney Festival, a few years ago, (from a St Petersburg Company), without any welded concept armoured about the Shakespeare text, achieved a universal statement concerning the transitory foolishness of the human experience breathtakingly beautiful and at the same time comically melancholic - despite the fact that it was spoken in Russian and sub-titled.

This framework by Ms Lewis I have witnessed before on her production of OUR TOWN at the New Theatre a few years ago. In that production, Ms Lewis had the company of actors covered in ash and stagger into the cellar of building in New York after the World Trade Centre tragedy. That it was a copy of OUR TOWN by Thornton Wilder, that one of the survivors found and the survivors enact, and that that play tells us essentially of a simpler, isolationist USA at the beginning of it's great century of international growth, the appropriation of that recent tragic historical event, of the assault on the symbol of the USA's world domination, the World Trade Centre, had logical and illuminating resonance. The same idea explored by Ms Lewis once again, here, but arguably less, dramaturgically, useful or applicable.

Within this context, Ms Demetriades, demonstrates the intelligence and beauty of artistic choice that was first noticed in her interpretation of Marina in last year's flawed production of PERICLES. Her Viola commanded the emotional territory that the production allowed with much grace. Her handling of the verse was exemplary- indeed this Bell company seemed, under the guidance of Ms Lewis, well in command of the Elizabethan demands (excusing, now and then, the naturalistic interpolations needed by some actors to communicate character's intentions clearly). Max Cullen was enchanting and witty as Feste and no more so than in the musical renditions of the contemporary songs elected for this production: the St James Infirmary Blues, magical!! Kit Brookman playing Olivia, a follow-up to his last Shakespearean heroine, Hermia in the Downstairs Belvoir production of A MIDSUMMER NIGHT'S DREAM -witty and waspish - this Elizabethan boy actor tradition becoming, and becoming a practice for this agile actor. Elan Zavelsky juggled the low comedy of Sir Andrew Aguecheek dexterously with his handsome and love sick Duke Orsino without much complication. But the outstanding performance, for me, was an astonishingly accomplished and assured performance, in-built with wit, emotional breadth and comic restraint of Brent Hill, especially as Maria, in his trio of characters.

The lighting by Luiz Pampolha needs special remark. The images conjured by him with Ms Lewis were often beautiful and transfixing. Achieved effortlessly and guilelessly. The Sound Design (Paul Charlier & Steve Toulmin) also was a magical and apt component to the performance.

The audience I was with found great humour in the famously comic scenes of the play and were also genuinely moved by the production. I wished the play had done more to achieve the latter, more potently using the events and circumstances of the play as written by Shakespeare.
Posted by Editor at 10:04 PM