Together Alone Alone Together 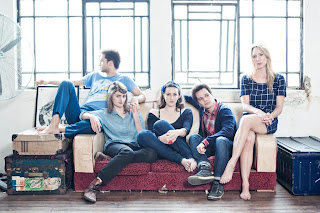 "Shopfront is an innovative contemporary arts centre - a not-for-profit co-operative started in 1976 by young people eager to have a place to turn their ideas into realities."

TOGETHER ALONE ALONE TOGETHER is the showing of the work of one of the many programs conducted by Shopfront: "ARTSLAB is an intensive arts laboratory and six month residency from May to November at Shopfront Contemporary Arts Centre. It gives emerging artists (aged 18-25) from across Australia the space, resources, training, guidance and connections they need to experiment, create new work and prepare for a lifetime as an artist."

Earlier this year, I saw Trevor Ashley's remarkable cabaret performance I'M EVERY WOMAN at the Sydney Opera House Studio venue where he told us that way back, after the bedroom and schoolroom fantasies of a performing arts career crystallised, it was at Shopfront he began, alongside Paul Capsis, to develop skills to augment his ambition and talent. Two extraordinary Australian talents nurtured.

The work of Aslam Abdus-samad called MOMENTS OF PERFECT deals with a very personal telling of a romantic gay relationship -"a show about connection." The ecstasy and ultimate agony of such a connection for the protagonist. Mr Abdus-samad asks us in his Artistic Statement to "not look at this work as a completed piece, rather I ask you to look at it as the first 20minutes of a larger work... My artistic enquiry lies in exploring the relationship between film and theatre to tell an honest story." The work is most impressive in the way he tells the story. Multi-media combined with live performance. The work presented in a small space, has the audience sit completely surrounded by simple line portraits, drawings, on three walls. On the other wall, wooden 'found' planks hang artistically. Using himself and costume /props he projects film images onto the multiple surfaces and cleverly and imaginatively interacts with them. The lighting and sound are all useful cohesions to his artistic vision. It is a very arresting performance/arts installation work. What is least interesting about the work is the subject matter, as it felt to be an area that has been explored many times before-a cliché of adolescent angst, there was no original point of view (SPRING AWAKENING, anyone!). The means engaged in the telling of the story were the elements that were most intriguing and engaging. Rather than a larger work been contemplated it seemed to need editing and refining.

On the other hand the work of the director Sybella Stevens and co-devisor Katy Jade Maudlin: LOOSE IN TIME, although, it too covers more than familiar territory, the Kafkaesque breakdown of a worker in the sterile environment of the office workplace, has a strikingly mature literary strength in the writing combined with a very sophisticated physical theatre choreographic exploration with costume and props, that elevated the experience of the work in the theatre, as thrillingly original. This was despite the relatively emerging and limited vocal and physical techniques of the performing artist, Katy Jade Maudlin.

CLOWNS, LIGHTS, STAGE devised by Alice Cooper and performed by her alter-ego, Mrs Clown, is a very sophisticated and comic take on the "unremarkable things - bits of paper, a wallet, travel passes, tampons, old food, cutlery and bank statements to name just a few..." we have about us. Having a personal phobia about clowns, the appearance of Ms Cooper with a big Red Nose caused my heart to beat in trepidation. I was, however persuaded and ultimately seduced by the clever writing and charm of the performer. Though, here, as well as above, the technique skills of the artist are still only 'emerging' and need more rigour to match the concept of imagination in both the writing and performance modes (Ms Cooper is also part of an emerging artist performance from the PACT Ensemble that opens this week called UNSETTLINGS for a longer season than this work, 18th November to 4th December at the Pact Theatre.).

Ms MacDermott seemed to be the most tentative artist in her conception and performance of TEN IRISH LOVE SONGS and will grow with experience and confidence. The work BELLYACHE by Mr Knezevic was "a moved reading of a selection of scenes" from an uncompleted draft of a play. It records the stay in a caravan park on the south coast of NSW of three young adolescents "enjoying their first summer free from school, parents etc." It tells about friendship- it predictably ends in tragedy. The text, as is, is fairly straight forward and not terribly interesting. The directing of the staged reading by Jane Grimley lacked real perception or staging skills that would enhance the material or elicit less indifferently acted performances from the actors, Alistair Wallace, Tim Reuben, Laura Homes. It was the least successful offering in the program.

The season director was Michael Pigott.

Shopfront led by TJ Eckleberg as the Artistic Director, seems to be a vibrant youth oriented space – with success and failures encouraged in the development of the rigours of the necessities of working in the Performing Arts. That Federal, State and Local government bodies (Rockdale, Hurstville and Kogarah) with various philanthropic organisations have recognised the benefits of the existence and practice of this organisation and it is a healthy and more than laudable benchmark of standard for the future health and wealth of the nation.

There was a time when Trevor Ashley and Paul Capsis were young untrained aspirants treading excitedly under the guidance of Shopfront and hopefully some of these young artists from the Artslab10 season will be contributing as richly to the Australian cultural fabric.

Catch you at PACT Theatre to see into the future possibilities.
Posted by Editor at 9:59 PM