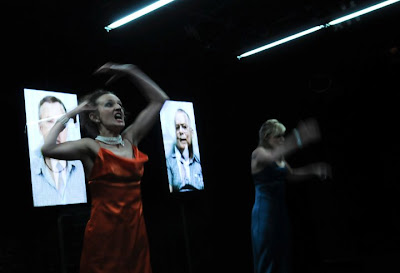 A DISTRESSING SCENARIO. A Double Bill by post & version 1.0 for B Sharp in the Downstairs Theatre.

A DISTRESSING SCENARIO is in two parts presented by two companies.

Part One: EVERYTHING I KNOW ABOUT THE GLOBAL FINANCIAL CRISIS IN ONE HOUR by post. The Devisers/Performers are Zoe Coombs Marr, Mish Grigor and Natalie Rose. Two of the many conceits of this show is that it was prepared in 4 weeks (meeting when they could), and that they took a deliberate decision not to explore or research the background of the topic at all except from their own sketchy, suburban understanding. "We think it has become a show about us trying to understand something that we can't understand, and communicating what it is we 'reckon' happened".

Deliberately dressed in terrible clothes with exactly matching red high heeled shoes these hapless young Australian women throw together as many cultural references and ignorances as possible to comically reflect what may be a satiric observation of themselves and their family and friends attempting to explain the Global Financial Crisis. It finishes after 50 minutes in a binge drinking spree where the intellectual denseness of these people is further befuddled in an alcoholic fug of stupefying dimensions.

That these artists have got together and spent, obviously, enthusiastic energies on this project, when they could, is undoubted and all power to them, but this comic piss-take needs much more rigour. About 35 minutes of this material could be edited out. The jokes lose their punch and credibility very quickly - we get it five or ten minutes in and patiently wait for progress and enlightenment. Instead we have repetition and increasing banalities and low sketch comic turns that lack the technical skills, and in one case, concentration to pull them off. The best element of this showing is surely the carpentry of, is it Zoe? The blackboard is ingenious compared to all of the other offers of this work. The wit and intricacy of the mechanisms worth recording.

A 15 minute hit, I reckon could be salvaged, with some rigour to this applied theatre exercise.Brevity is the soul of wit.

A 50 minute agony, truly a distressing scenario, for all the wrong reasons - none of them to do with the object of their exploration: the GFC, with "Granny Mae" or "Colonel Sanders".

A case where ignorance did not create enough sustained bliss.

The text developed by this team has everything presented to the audience: spoken language, props, dance and movement, video image and sound track without a single superfluous choice. All of the choices appear to have been explored, refined, edited to such integrated clear precision that the 30 minute length flies by and is truly a distressing scenario of some critical moment.

The physical and vocal commitment and skill of Ms Phegan and Vercoe are devastating in their precise execution. Every gesture is packed with a density of committed intelligence and meaning and the accumulative image of a nation of spenders binging on champagne, spraying the audience with expensive capitalism packs a breathtaking slap in the face. Awesome professionalism of dedicated technical skills.

This is a gem of a work.

The contrast in the intellectual preparation of these two works and the technical skills of the artists in their chosen modes of expression could not be more dramatically demarcated and contrasted. The celebration of the contemporary movement of what I understand is "the aesthetics of failure" as demonstrated by post, near enough is never good enough, and that of excellence by version 1.0 could not be so closely observed.

A mixed evening of depression and exaltation.
Posted by Editor at 11:11 PM