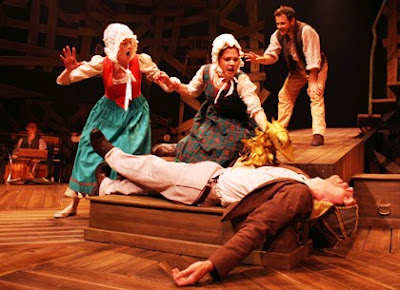 Seven actors and three musicians under the direction of Michael Futcher using the adapted (Carol Ann Duffy) and dramatised (Tim Supple) versions of both GRIMM TALES (1994) and MORE GRIMM TALES (1997) created an enjoyable night in the theatre for all ages.

The original stories collected and published by the Brothers Grimm (3 volumes) from the oral heritage of the peoples in and around Frankfurt and of specifically traditional German legend have along with the 17th century Parisian Charles Perrault and Danish Hans Christian Andersen been the early source of many children's early excursions into literature that served them well as both entertainment and moral fables. The stories have been adopted and adapted by many others over time (Walt Disney, especially) changing to suit the needs and cultures they were being told for and to.

In this version by The Queensland Theatre Company nine stories are acted out for us from familiar stories such as Hansel and Gretel, Ashputtel (we know as Cinderella), and Snow White to the less familiar (to me) stories of The Magic Table, The Gold Donkey and Cudgel in the Sack.

The stories here have all the signature literary marks of the form (so that the experience of so many became a little wearying in the repetitive stylistic formulations) told as mostly spoken narrative, acted out by the company and there is, mostly, only a little empathetic identification for character. Unlike the Disney versions there is little sentimental ownership for the listener. The narrative and the moral being the paramount objective.

The cruelty of some of the stories has not been censored by the adaptors and it is astringently interesting to have the step-sisters in Ashputtel self mutilate themselves and to have, firstly the right eye and then the left eye plucked out by birds, as we see them in beggar sacks with walking sticks blindly clambering off into the gathering twilight. There is something disturbing (in this age of well publicised teenage self harmers) to watch Rumplestilskin, in being tricked by the peasant girl now Princess, from his rightful reward from the bargain drawn between them, tear himself in two - in this production, holding his disengaged bloody left leg in the air. The children at my performance were both aghast at and relishing the horror of it (then, of course, the body count and the malevolent deaths and mutilations in the latest film HARRY POTTER AND THE DEATHLY HALLOWS PART 1 along with the home x-box games probably played by this generation are much worse). Nothing much as changed in preparing our children for life.

Michael Futcher moved the stories swiftly, encouraging great facility and efficiency from the actors. Ultimately, as the night wore on I felt the direction was a little heavy handed and conservative (literal), encumbered by design choices in sets and costumes (Greg Clarke) that, though aesthetically pleasing, were over elaborate and explanatory and so lessened the opportunity for the actors and audience to participate in the story telling by self imagining and endowing the narrative text with more individual invention. The Duck in the Hansel and Gretal story, imaginatively created and physically, delicately embodied by Scott Witt was what I longed for more of, from the actors. Just the actor and physical and vocal clues to guide us to participating more actively, imaginatively. Too much was shown or demonstrated for us in this theatre - a fairly filmic solution, done so much more freely and charmingly by Disney, for instance. Although, this did not impede the general reception to the performance.

The lighting by David Walters was an especially inventive and beautiful element in the illusions of the moods and narratives. The Snow White episode especially memorable. The live presence of the three musicians using a wide variety of instruments was also a very enhancing ingredient.

It was fun and pleasurable to watch the children sometimes agog with the wonder of how things were done in front of their eyes, for instance, the return of Grandma and Little Red Cap, from the bowels of the wolf. It was enjoyable to have them clap and/or beat out he rhythms of the music with their heads and bodies, sometimes completely unconsciously. That the theatre held them in such pleasurable awe is another nail to the "theatre is dead" spruikers and they gave me reason alone to relax and enjoy myself along with them.
Posted by Editor at 6:25 PM