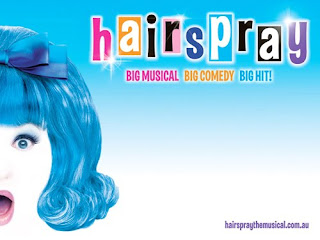 Two quotes found in the program:

"Be who you are and say what you feel because those who mind don't matter and those who matter don't mind". Dr. Seuss.

"The ultimate tragedy is not the oppression and cruelty of the bad people but the silence over that by the good people". Martin Luther King Jnr.

These two men, Dr Seuss and Dr King, and their quotes encapsulate the joy and the serious intent of this absolutely fun show, HAIRSPRAY. Based on the 1988 film by John Waters in the midst of his career mainstream metamorphosis, this adaptation into a Broadway musical form: Book by Mark O'Donnell, Thomas Meehan; Music by Marc Shaiman; Lyrics by Scott Whittman, Marc Shaiman, is a zing zang, two and a half hour romp of mad cap fun with a very timeless and important moral fable to make our lives better.

At the end of this performance all the audience were singing and dancing, - the Princess Theatre stall floor boards were undulating under the expressive explosions - and I was glad to witness and can say to all the boring naysayers of contemporary theatre culture that the theatre is not dead. All ages, all sexes, all, ALL of us were wholeheartedly responding in thanks for a terrific night out in a live venue. WHEEEE!!! The theatre is not dead.

HAIRSPRAY set in a provincial American city called Baltimore tells us "that we are all special, we are all different and we should all embrace and celebrate those differences". And "Underlying Hairspray's music, dance, humour, petticoats and 60's kitsch is a cry for tolerance and a real heart".

Tracy Turnblad (Jaz Flowers) is a burgeoning teenage girl with all of the aspirations of a pop and dance besotted adorer of the local television pop music show: "WZTT's, THE CORNY COLLINS SHOW", who sees only the potential of all people and in her optimistic slipstream leads a whole city into real cultural confrontation and revolution. Motormouth Maybelle's anthem with the company ,"I Know Where I've Been", backed with images of the Civil Rights marches is wonderfully moving in the show's penultimate climax.

Ms Flowers is delightful and carries the show admirably, abetted by a strongly cast set of characters: led by Trevor Ashley (adorable), Grant Piro, Scott Irwin, Marney McQueen (wickedly winning), Jack Chambers (dazzling dancer and not too bad crooner!!), Esther Hannaford and Renee Armstrong, Cle Morgan, Tevin Campbell and the indefatigably witty Gary Scale (each Authority Figure astringently, acidly, joyously drawn). To back these are small, tight musical theatre character creations by all the company that has a dancing energy that is thrilling and infectious to watch (Choreography, Jason Coleman). The musical direction by Stephen Amos driven for thrills.

The best accolades however must be given to the Director, David Atkins who has led an inspired production team to the dizzy heights of theatre cartoon wizardry that leaves one time warped into the past and to the future, both at once. The images blazingly, garishly (positive sense), nostalgically familiar with a contemporary design technique of now and the future.

However, it is the Digital artistry conjured by Mr Atkins from his creative team that is marvellously impressive. On several screens across the proscenium space, static and animated images, supporting and developing the many scenes of the play action are bedazzling to behold. Interaction with the images also lift the wizardy even higher. The live action interplay between Mr Ashley and Mr Piro during the "Timeless to Me" segment is kitch and winning in all of it's sentimental gesture and is simply one instance of the cleverness of the technique explored in this production (I find it amusing, that this interaction with live and animated images was made famous in the original MARY POPPINS film and is hardly explored in the Disney stage version of the musical - birds flying out of the St Paul's Cathedral FEED THE BIRDS episode, the only featured image I can recall). Whereas here, just up the street in Melbourne, it is put to great effect on the HAIRSPRAY stage, live.)

That this production company and director was granted permission to create HAIRSPRAY as an entirely original entity here in Melbourne, for the Australian audiences, must please the licensing parents in the USA enormously, for it is a fairly amazing and successful result. After the disaster of just such an opportunity granted to the Sydney Theatre Company's production of SPRING AWAKENING, earlier this year, it might be continued in the future of Australian productions. LEGALLY BLONDE - perhaps?

Congratulations to all for a terrifically energising experience. Worth the money, I reckoned. The show is coming to Sydney, in March I believe. Welcome Mr Ashley, Flowers, Atkins and all I say.

Tracy Turnblad forever.
Posted by Editor at 9:21 AM