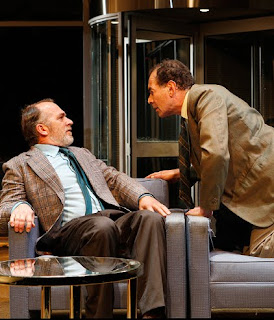 Melbourne Theatre Company in association with Melbourne International Arts Festival presents LIFE WITHOUT ME by Daniel Keene in the Sumner Theatre, Melbourne.

Being a Sydney-ite I have had a relatively limited experience of Daniel Keene's work. However, the work, that I have seen, has always attracted my attention, and the reputation talked about in the program notes as 'some sort of poet of the streets' seems to be a good summary of my appreciation. With, the, generally, marginal characters that people his work, the poetry of his vison, expressed in his texts, is always subtle but beguiling. The pain and agonies of a lot of his creations achieve a dignity and focus that in a peculiar way have always had me regard them, similarly, but differently, to the experience of the peopled world of, say, Genet.

"Who are the characters in my plays? They are mostly people without privilege, who have no 'position' no power. Why do I choose to create characters like this? Because I want them to bring nothing with them, to have no biography, to create nothing to begin with. I want to create characters in my plays to live moment to moment in front of our eyes (they can do nothing else) and to reveal what is within them (They have nothing else to reveal)." – Daniel Keene in interview with Stephane Muh and Christine Bouvier.

"Over a thirty-year career, he has won most of Australia's major playwriting awards, some multiple times. Yet he has remained inexplicably marginalised, produced and commissioned by smaller companies and festivals, but, until recently, overlooked by the mainstream." It was somewhat of a surprise to discover that LIFE WITHOUT ME is the first production by the Melbourne Theatre Company, (commissioned almost three years ago) of this quintessential Melbourne writer."In Melbourne, his home town, Keene's reputation is founded on the Keene /Taylor Theatre Project, his acclaimed collaboration beginning in the nineties on a series of small-scale, often site-specific works with director Ariette Taylor and an ensemble of actors".

The Sydney Theatre Company presented Mr Keene's THE SERPENT'S TEETH, a diptych of two one act plays: CITIZENS and SOLDIERS a year or so ago in The Drama Theatre at the Sydney Opera House. This was, in my experience, a marvellous, monumental piece of Australian writing, that was the best of that year. The scope of it's vision and the achingly poignant observations of the universal condition of mankind in contemporary times, pregnant with humbling contemporary relevance.

LIFE WITHOUT ME, then, was a grave disappointment. In the program notes to the play: "... If you don't know who you are and you don't know where you're headed, you might find yourself spiralling in ever-tightening circles until you come to rest in a non-descript part of town in a crummy two-star hotel, where the service is churlish, the lift doesn't work, the toast is burnt and the pot plants set off your allergies. Yet, keep your expectations low, and, who knows? - you might be pleasantly surprised by how everything works out". I was indeed surprised but in a wearying, dispirited way.

In an impeccable design recreation of a two star hotel foyer, teetering on the edge of a fall into decrepitude (Dale Ferguson) given the momentary coming of passing time and disappearing managerial energy, seven beings find themselves in, what the program discusses and discourses endlessly about, a 'salle des pas perdus' or in blunt literal translation: a room of lost steps (the poetic implications ring resoundingly).Why they are there is just the trifling windy accident of fate, we observe in the action of the production. Why they stay or why some of them can't leave, became, over the long length of this work, less and less engaging until I felt, why don't I just get up and scream or leave? Trapped like the characters in this fairly familiar territory of existential angst, with a faintly Australian timbre, I respectfully endured.

No exit for these people and no exit for me. The program notes indicate some sources of inspiration for the writer's creation: Feydeayu (if only), Ionesco, Arrabel, Lewis Carrol, Thoreau, Erving Goffman and Satre. And the play echoes, derivatively, more or less all of the aforementioned –throw Beckett into the mix as well. I did not feel that I needed to see this play. None of my apprehensions of life or my ability to observe through my looking glass at life, were enlightened or expanded. Other than the weight of a wearied exhaustion, I left the theatre less, not more, the same being.

The comedy in the foyer of the hotel that Mr Keene talks about in the program notes, does not really materialise – hardly more than a chuckle of recognition, from most of us, I saw it on a night in the last week of performance - and "underneath (the) serious questions, moments and situations" that were happening mostly, on awkwardly designed black holes of balconies, high in the proscenium spaces, difficult to participate comfortably with, if, like me you were seated in the front section of the theatre, that declined in performance, into almost maudlin sentimentality of familiar middle-aged romantic and youthful angst.

Maybe the play had too much time to gestate, and/or maybe the dramaturgy and the acting had too much respect for the writer to see the emerging work with less than a positive critical eye. Who knows, but the creative team? Certainly the result, on my night in the theatre was a considerable disappointment. Better that the Company had staged THE SERPENT'S TEETH, taking advantage of this marvellous theatre space and stage, I reckoned, on contemplation on my walk back to my hotel.

The company of actors were patient and generous with the material and the directing aid of Peter Evans given to them. I enjoyed especially the work of Robert Menzies (Nigel), tirelessly inventive in an attempt to keep the play and production buoyant; and the clarity and directness of Benedict Hardie (Tom), it had an uncluttered freshness about it that was a respite from the generally effortful work about him. I admired Deidre Rubenstein (Alice Jarvie), valiant until drawn into the sphere of the mannered and sentimental offers of her romantic partner in writing, Brian Lipson (Roy Williams) - an unexpected experience for me, of an actor I have mostly enjoyed.

There is some talk of the growing reputation and production of Mr Keene's work in Europe, particularly France. That he is not unique in this is reflected in the European and American opportunities of other writers, say for example, Timothy Daly (Kafka's Dances), a Sydney writer, as well. The gradual development of the Austarlian writer in the international arena has been happening and in the age of the new media, let us hope, more so. Prophets sometimes require the foreign recognition to be more fully recognised in their own towns.
Posted by Editor at 2:44 PM