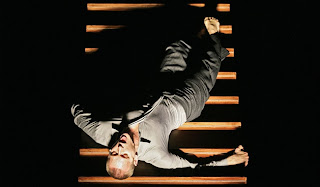 "This production of THE TELL-TALE HEART is based on Schauspielhaus Vienna's 2004 production, DAS VERRATERISCHE HERZ, which was conceived and directed by Barrie Kosky and performed by Martin Niedermair in German. This production is performed in English, and was reconceived with the original artists, premiering at The CUB Malthouse for the Melbourne International Arts Theatre 2007. It has since been performed at Edinburgh International Festival 2008 & Sydney Festival 2009" This return season at the Merlyn Theatre has been directed by Michael Kantor with all of the original artists, except for the replacement of Barrie Kosky at the piano by Michael Kieran Harvey.

This is the first time that I have seen this work.

The performance begins with the audience seated in front of a framed oblong space filled with the glow of a red curtain. The lights dim to darkness. There is an absence of sound. Then the drawing of the mechanisms of the curtains intrude, in the darkness, with the intensity of focused purpose. Silence. Extended Silence. More Tension.

Suddenly an old recording of a calypso version of the lyrics of I Could Have Danced All Night from MY FAIR LADY crashes in. A female voice singing joyously the whole of the song. A Barrie Kosky joke. A typical Kosky musical jest: :
" ... I'll never know what made it so exciting;
Why all at once my heart took flight.I only know when he
began to dance with me I could have danced,
danced, danced all night. ..."

"My heart took flight." resounds in my head. Unfortunately my heart kept on at its natural pace. My brain went on flights of fancy. I ruminated on the sophistication of Barrie Kosky. The auteur was front and centre of my consciousness. I had been apprised of the journey's unpredictability?

Silence. Darkness. Gradually, a miracle of images are sculpted with light, as it slowly dances in the stillness, around the head, face, then body of the actor Martin Niedermair, who is caught mid flight on a dizzying, vertiginous staircase, scaled in breathtaking perspective from ground to the upper height of the proscenium arch into the reaches of the theatre's fly tower.

Dressed in a contemporary grey suit jacket and trousers; blue, opened neck, long sleeved, cuffed shirt but bare-footed, Mr Neidermair, equipped with the intrusive appearance of a micro-phone resting down the side of his face, holds breathlessly our attention. At last he begins the famous story in accented English.

With halting phrasing, often breaking up the sense of the English text, to allow the demonstration of flickering nervous twitches across the pallid face and lubricious licking of lips, our story- teller takes us on an account of his obsession with an old man neighbour and his filmed eye, that provokes him to murder, dismemberment and disposal under the floor boards; and foolish showings off to an alerted constabulary. Where his own psyche gradually gives way to the beat, beat of the tell-tale heart thumping from under the floor into the night and cause his revelatory confession to the law.

Interpolated into the story are some selections of music, Bach, Purcell and Wolf , played on a piano, solo, and sometimes accompanying lyrics, sung ecstatically and mesmerizingly by Mr Neidermair.

The Set design is strikingly beautiful (Anna Tregloan) and the light-scape, with, seemingly, an infinite calibration of delicacy, is astonishing in it's mood shifting skill (Paul Jackson). Mr Neidermair shifts about this staircase to create installations of image and with each new picture arrests our attention.

Mark Fisher in the program notes tell us that the inspiration for this production came to Mr Kosky “ever since coming across Steven Berkoff''s version in the mid-1980's. Kosky felt there was room to expand it beyond Berkoff's half an hour. This is a highly concentrated hour of terror: it is 60 minutes of nail-biting tension. Some people find it terrifying, some people find it macabre; and some of it is quite funny, as horror should be.”

Unfortunately this was not my experience. I was kept at arm distance from the theatrical intentions of the work. Whether it was the disjointed verbalisation of the text, or the de-humanising mechanism of the micro-phoned speech or the sometimes distracting musical interludes that did not necessarily continue to construct terror, or a sense of the macabre or even humour, I still haven't concluded. Whether it was the beautiful, disembodied precision of the piano by Mr Harvey that rendered the music lifeless and cold, I cannot tell. The usual cabaret brio of Mr Kosky at the piano accompanying his works was missing. Maybe the passionate electric energy of Kosky sweating creatively, seemingly improvisational over the keyboard was the absent element? There was an intellectual precision about this piece of art, this night. Undeniably the aesthetics were, as usual, with Mr Kosky's work admirable.

On ABC Radio National several Sunday morning's ago, I heard Humphrey Bower read this same story and the dramatic impact of the music of the writing of Poe was thrilling. It was simply the accurate reading of the text, just the language impinging on my imagination with the gathering accumulation of my undistracted focus, and together, the reader and I, the listener, experienced the full power of Edward Allen Poe's genius. The deconstruction, abstraction and invention of Mr Kosky in his version of this tale seemed not to ignite my imaginings in the same way.

I know that I may be the only nay sayer about this work, but perhaps the six years of this production's life is too long, or the absence of the originator at the keyboard undermines the intentions. Mr Fisher further quotes Mr Kosky and his belief that a work should only live as long as it gets better and stronger "like wine."

Barrie Kosky has created great theatre. His brilliant POPPEA based around the Monteverdi opera, also displaying the gifts of Martin Niedermair, which I saw in Sydney last year, was a more than an exciting afternoon in the theatre. Perhaps I just have caught this work too late in it's life? Alison Croggon's blog review was what urged me to catch it. Read her response it is quite ecstatic. Such is art. Thank goodness.
Posted by Editor at 9:37 PM