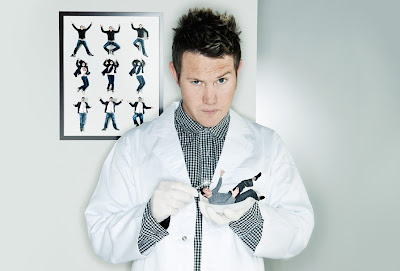 My first meeting with Mr Perfect was in THE BIG CON, a satirical revue with Max Gillies – I was shocked, really uncomfortably shocked (I was in the front row at the Playhouse) and loved him for it; later in KEATING! THE MUSICAL, he has indelibly written an impression of a past political figure, Mr Alexander Downer, in my brain, that almost obliterates any memory of the real person for me – the satirical edge so acute and sharp!, the observation almost uncanny, totally “wicked”. And the last time I saw Eddie Perfect was in his own musical: SHANE WARNE THE MUSICAL, and although the material was slightly tempered (not much), I loved it. I am a fan.

The best thing about this evolving World Première, and I did see it in previews, is the robust ebullience of this totally charismatic performer. His still boyish energy ( now a dad, he confesses in the show), his playful connection with his audience, his felicitous comic flair and timing, with a truly good musical voice are all in fine fettle. At midnight into the early morning not too mean a feat.

Mr Perfect tells us that MISANTHROPOLOGY (hard to say, he confesses), is an examination of aspects of our 'culture' today. The show begins with a portentous, but funny, voice-over of man's development from the slimes of the 'creation'. A set of eight or so songs follow, mostly dealing with the extremities of members of our culture with too much money and enormous self delusional pretensions.” Among them: An opine for Neanderthal Love; for the view supposedly espoused by the indefatigable Kerri-Anne Kennerly on her morning TV show that some footballers should be OK about unsolicited sex for “No” can mean “Yes”; for a rich Daddy (based on fact, it seems) who buys his daughter for her 21st Birthday, some new “tits”- breast implants, in a song called DADDY'S TITS” - creepy as all get-out; a cruel but delightful jab at the self-righteous bicycle riders, the eco-conscious , health enthusiasts of our cities in their projecting, 'decorous ' lycra- shorts; and in a final satirical stab (because this is a show in an Arts Festival, he says) at the pointy-end of Art, the pretensions of the five hour (or more!) events espoused by Mr Kosky et al. This show is about one hour ten-fifteen minutes long – not so much pretentious as hopefully expectant?! Slogging back through the Hyde Park mud at 1.30 AM is not too much of a problem, if you had a great time.

The evening then, will entirely be a very subjective one. If you like the knife sharp then this may be your late night fillip of adrenaline. If not, definitely not.

I was vaguely disappointed, in contrast to my paralysed shocks at THE BIG CON , for instance. The wounds often did not go deep enough, or, as in the case of the ART stab at the end, too superficially observed, too general. For me, that there was no mention Mr Kosky's penchant for actors in underwear, and covered in body excretions was a major discrepancy in Perfect's lyrics of this song (the underwear, shit, vomit and blood 'factories' of the Sydney theatre scene – Melbourne, too, I venture – should be on the Stock Market register – shares for these products must be astronomical, the recipes, pure gold). But this is a very personal observation and want. The song does enough scores to give it punch. Maybe the influence of Mr Perfect's recent television work OFFSPRING, is taming him? Or is it that his role as a dad now is causing some re-think about his public persona or reputation? Or am I shock proof, theses days?

Eddie Perfect, along with Iota, Paul Capsis, and Trevor Ashley, are a very astringent and bracing stellar cohort of cabaret artists that should not ever be missed, when the opportunity arises – so I recommend, do go and see what you think!
Posted by Editor at 8:39 PM