Alice and Alan's Adventures In Wonderland 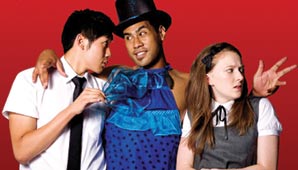 Slide, is a very beautifully appointed venue. The food served with this musical entertainment was good and the staff could not be more helpful and pleasant to make this theatre-restaurant type experience easy and pleasurable.

ALICE AND ALAN'S ADVENTURES IN WONDERLAND is unfortunately not very good. The writing (Book and Lyrics: Steve McGrath) is lacking in real coherency and clarity of story telling logic, and works at a low level of low comedy of puerile double entendre and plain vulgarity that makes the writers of, say, the old television show, ARE YOU BEING SERVED? seem like Tom Stoppard in comparison. When commenting on another new musical last year, EVERY SINGLE SATURDAY, I said if the writing does not meet criteria of real possibility, than no other artist who becomes involved with the project can redeem the effort. The writing is the initiating bedrock and tool: if no good, no show. Don't go ahead. Just don't.

The music by Peter Aoun, (thirteen songs), is generic in form and is presented with a pre-recorded synthesised "band in a box" sound. Most of the artists are singers. Some better than others, but all of them have an enthusiasm about that work that makes one wish they had better material. The choreography by Anouska Reid is basic and serves the music as best it can considering the limitations of the performing space and the hugely varying skills of the performers. What were the other artists thinking when they came on board? The opportunity to have a chance to perform is not enough reason to risk exposure of this kind, if you really want to be taken seriously.

The acting by nearly everyone is poor and the book which is already struggling to make an impact, has little chance, with the characters being barely embodied recitations of learnt lines by hapless performers who have been barely placed on stage by the director (Danielle O'Keefe). Unfortunately Ms Jenni Little playing Alice, and the leading role, has no stage presence or dramatic skills or technique at all (her singing is OK). Andrew Wang as Alan the co-lead, though more substantial in presence is still pallid. If your leading characters lack communicative credibility and oomph, you and we, the audience, are in trouble. Alice and Alan are in "no land" at all. There is no wonder to be had here. Ray Chong Nee works hard as the Mad Hatter and Martelle Hammer as Cheshire Cat has personality and a raspy voice of some note.

Furthermore, there is no sense of a connected ensemble that has any idea of who they are or how they relate to each other. It is a matter for each artist to sink or swim, to drown or survive, as best they can. So, when the experienced cabaret/drag performer Hugh Monroe appears as the Red Queen, it is a relief, in that there is some directional sense to his work and some high energy "campery" that at least, in a panto dame kind of way (think Mrs Slocombe from ARE YOU BEING SERVED? in a musical and with very good drag costumes, a lot of them, impeccably accomplished) puts some comprehensible zest into the goings-on. Even if he looks as if he is compensating desperately for all the others and simply devouring them in the effort to prevent performance humiliation. SO much energy. Mr Monroe has definitely decided, as he has committed himself to this material, that he will swim, like Ian Thorpe as only dreamt of. It is a wonder that he didn't sing I WILL SURVIVE as part of the show.

This musical, "conceived and produced by Steve Carnell" is simply with the best will, a misguided effort, at worst, awful.

I am in a very invidious position in that I and a friend were invited as guests to this performance and I don't want to be ungrateful. The venue is great. The food was good. The good will in the room from all was palpable, but this was simply the worst experience I have had in the theatre for a while. The kind of experience that I can usually predict and avoid.

I was not sure whether I should even 'blog' this work as I only had negative responses to most of the theatrical effort and I do want to support the time and good will of the artists, all artists - what they do is not easy to do and there is so little reward. But, on discussion with colleagues I have, to reflect a growing frustration as to the lack of good quality bench marking of the Mardi Gras season entertainments. This work, although not part of Mardi Gras, has been directed to be shown "during Mardi Gras. 2011" and is aimed at that market. That it and the double bill at the Darlinghurst Theatre, JANE AUSTEN'S GUIDE TO PORNOGRAPHY and GORGEOUS BASTARDS are so poor in their overall judgement as to what is acceptable writing standard and fare for a paying audience (there is no lack of production budget standard, in ALICE AND ALAN… indeed the costumes and make-ups are good, Anna Gardiner and Niki Simpson) that it needs to be remarked upon and somehow, the Mardi Gras committee ought to be more responsible.

My blog on CANNIBAL, suggested a personal feeling that some care and maturity had begun to appear in the Mardi Gras programming. CANARY at the New Theatre, a theatre company with no financial backing has managed to curate a Mardi Gras themed play (although, it is not only a Mardi Gras themed play), of real quality and importance. It is aided, of course, with quality writing. There is the key and the starting point for the possibility of a quality production: the WRITING. If the Mardi Gras even perused the material before supporting the productions in their Mardi Gras Season Guide some quality standard could be applied and then even the 'other' opportunists to the festival might also need to lift their game.

Lewis Carroll's ALICE IN WONDERLAND stories have been plundered regularly since their original conception. Broadway, at the end of March, has a new Frank Wiildhorn musical opening called WONDERLAND. I hope it has more success than ALICE AND ALAN'S ADVENTURES IN WONDERLAND. Mr Wildhorn has had three musicals on Broadway, JEKYLL AND HYDE, THE CIVIL WAR and THE SCARLETT PIMPERNEL and those productions accumulated a loss of 20 million dollars. It is not an easy form to create and solve. I hope Blancmange Productions. and Slide do not have similar losses.
Posted by Editor at 11:06 PM