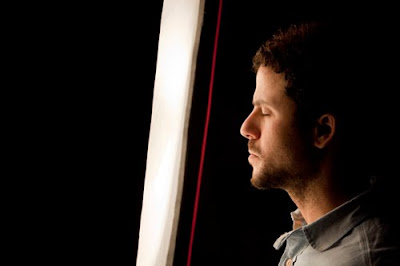 51 scenes in 4 weeks and Schimmelpfennig's infinitely interpretable text.
One hotel room, 8 performers, 39 characters, 41 costumes, 40 props, 110 light bulbs, 17 metre-wide projections, 2 palm-sized cameras, 3 mics, 2 lamps, 2 chairs, 1 porter's trolley, 1 piano and a bed.
A state of mind, a galaxy. Affairs, fears of mortality. Surreality, pornography, a creature from another world.
The distance between molecules …and stars in the universe, insignificant. 2 workmen lifting ladders into outer-space, a kiss
…And an extraordinary team with a huge net of talents to haul this enormous kaleidoscopic piece out of our imagination and into the theatre in - did I mention - just 4 weeks…!

Program notes from the Director of the play, Christabel Sved.

A cast of actors: Annie Byron, Justin Stewart Cotta, Zindzi Okenyo, Johanna Puglisi, Richard Pyros, Graeme Rhodes, Sophie Ross and Tahki Saul. And all the actors are valiant, sometimes magnificent, in their efforts of "hauling" this text for the Director onto the stage for an audience.

Justin Nardella, the Designer has produced a stunning looking set. The Wharf 2 stage floor is an ocean/pool of black gloss paint - glistening and reflecting, giving an illusion of fathomless depths - perhaps a metaphor for the material of this text? Fathomless. On this floor, occasionally, an oblong shape and graph crossed set of white lines reveal themselves - appear and disappear. A metaphor, too? A map that appears to give us bearings on this black consciousness of gloss paint, only to disappear again? Tauntingly map-less? Ms Sved tell us 110 light bulbs hang above the set and spill over the audience – they light and dim. We see and then we don't see? Metaphor again? Clarity focuses and then fades? Who knows? There is a beautifully made king sized bed, one that one would find in a first class hotel, fluffed with white doona and pillows that progressively, on the journey through this play, end up a ruin, a mess - from the promise of dreams to a reality of nightmare? Still more metaphor? Could be.

The Lighting and Audio Visual design by Verity Hampson is highly ‘aesthetised’ in style, and provides much comfort: clever in directing our focus to the action, obliterating the mechanisms and machinations of the performers as they dress and undress into the 41 costumes. Max Lyandvert’s Sound Design subtly underlines, and occasionally subverts, or otherwise, the activities of the action of the play. Johanna Puglisi choreographs the physicality and dance, perhaps even the staging of the activities. Sometimes weird, sometimes weirdly appropriate.

Despite the fact that there is no interval, one is never, in the nearly two hours of forced occupation of the theatre, bored (by the bye, to not have an interval is smart, no easy possibility of exit is given. Some audience, a few seats up my row, became quite restless, they left with an uneasy clatter. We had also been given a free beer before the show, it had to be had before the show, it was not available after the show – some needed it after, I could tell as I surveyed the foyer afterwards. Come to think of it, the alcoholic relaxant, too, might have been a ploy to subdue us? To keep us in our seats, unless the toilet became an urgent need. Perhaps that's why they left. They didn't come back, though.)

So, one may be bewildered, befuddled and bellicose but never quite bored. For there is a commitment and a sense of mission about the actors and other contributors that keeps one present and active in attempting to gather “what the fuck” is this all about. Their confident action made me to want to get it. They believed in what they were doing, so to make an effort, as audience, is demanded.

Is it meant to have shape? Is it meant to have meaning? What am I to understand? What am I to take home? Should I feel nourished with this preoccupation of my precious and limited time? Like a contemporary gallery room at the MCA or at the Biennale Cockatoo Island site, strewn with what looks like discarded "life objects”, am I entrapped in this space with this king sized bed and meant to comprehend something that will enhance my life? Give me confidence about the plight of my worlds? In one of the scenes I remember hearing "We are not alone." We are confronted with a "Boyg" like organism that seems to envelop, swallow, chew and spit out the humanity that the actors have impersonated. People undress a lot. Sex is promised. A woman over seventy begins the events of the play and tells across the landscape of the night, perhaps, of the last encounter of her life - a violent interaction with a violent husband, besides memories of aunts and childhood. She is also the last event of the play. Pieces of brief interleaved stories of ordinary humanity are interspersed with insect specimen jars, an organism, a map of the universe and much else.

I was intrigued but never transported. I was alerted but never inspired. What I can't resolve is whether it is the fault of the writing, its structure and too briefly interrupted diversions? Or, is it that Ms Sved and her wonderful team in only 4 weeks rehearsal have only just begun to get on top of the material and the structure that they have inventively clad the text with, so that they have not yet had the time to properly technically rehearse their production superstructure, let alone refine and point to the profundity of what they have all wrought, for an audience's enlightenment? The source, that is the writer, and this antipodean team of collaborators attempting to comprehend and translate this European, this German worldview, this Schiller prize winning writer's take and form of the world, need more time? I think so. I saw a performance late in the opening week, and despite the very mixed response that I had read and heard, about the press night, had a relatively good time. Was the company with the passing of more time securing a clarity and rhythm? If so, will this committed work solve the communication problems of this work more and more easily and clearly for the audience?. There is a week to go. Do go and let me know.

An actress friend of mine, who has just returned to domicile in Sydney after living in Perth for sometime, after the performance commented that in the number of times that she has attended theatre in the Wharf 2, the company of actors always performed in their underwear. Is that de rigueur? she enquired. I simply replied at least this time it was clean underwear – no shit, piss, vomit or blood. And, after all, this was contemporary German repertoire that seemed, at least in the Australian productions, and the Australian directors based in Germany productions, visiting home, always made a requirement for our appreciation of the drama of the plays (relievedly, there were no paper party crowns in this production) and as part of the NEXT STAGES curation it was a practice of late, more common than not. Once upon a time in theatre history there had been tennis rackets and tea sets, boaters and gloves. And according to the Spectrum interview this morning by Elissa Blake in the Sydney Morning Herald, soon we will see seven or so actors without even underwear in Simon Stone's production of Brecht's BAAL for the Sydney Theatre Company - the" Next Stage", I guess.

There is nothing, it seems, like a Schimmelpfennig play to lead one to philosophic musings.I have seen in Sydney his ARABIAN NIGHTS and PUSH UP. Seen ARABIAN NIGHTS in two different productions that mainly failed, but loved PUSH UP. BEFORE / AFTER with the microphone rendering of the text felt like a novel being read aloud. In fact, now that I cogitate, maybe, I have enjoyed reading the plays more than in seeing them staged. Ah, curious. Maybe, I need to go to Germany to grasp the true virtues of this writer's fame. For, so far, in the Sydney productions it is all an elusive mystery.

This company of artists have not yet "hauled" this enormous kaleidoscopic piece of their imaginations fully into the theatre.
Posted by Editor at 1:45 PM