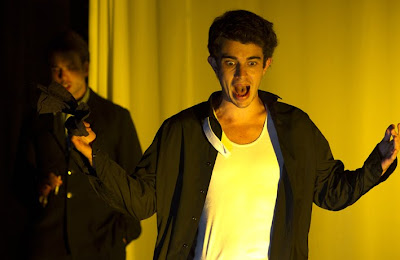 Coming back to the theatre, Mr Harvey has written an epic decade covering journey of some parts of Gay British history. Beginning in 1961 and spanning time ‘til now, Mr Harvey has us follow the story of a family history and its chequered interaction in dealing with the gay experience. We begin in a time when to be gay was criminal and regarded as a curable illness. It was a cause of shame and was best denied and hidden – a career destroyer if exposed. The book-ended story of Tom, his wife Ellie, and a friend called Billy, chronicles the travails of denial and the consequences to his family and friends as the superstructure of the narrative. The play finishes today with the outing of a public figure, Tom (again) who, at last, has the wherewithal to reveal truths – too late, but better late than never. Maybe.

The play begins in a ‘travesty’, of the moral activist Mary Whitehouse and the occasion of her founding of the Festival of Light and then into naturalistic but very sprightly, lightly satiric scenes of family meetings, merging into cruel drama and emotional melodrama of arrest, illness and regret and betrayal, interspersed with a surreal journey by a female figure that whirls across time on a magic carpet – all in all, a range of theatrical form and style. The play jumps back and forth in time and a small company of eight actors play a variety of roles (24) and ages. Sometimes the formula rings memories of Tony Kushner’s remarkable and genre creating work ANGELS IN AMERICA (20years old this year – how time flies, a revival please!) sub-titled a Gay Fantasia. This work by Mr Harvey has aspirations of gay fantasia certainly, but not the depth of philosophical reach and ambition of ANGELS. Too familialst and narrowly satiric in its political vision. It still has virtue and punch, just on a smaller scale.

The story of how the actions of denial of one’s true self, the sins of our fathers, can have devastating consequences on the self and the generations to come, entertainingly, if, sometimes, confusedly unravels. Tom in denying himself and betraying his friend finds the karma of justice ultimately targeting him, relentlessly, like the no longer poised furies, but the winds of activated destruction. We meet in this text across time, Mary Whitehouse, Margaret Thatcher, we have mention of cultural figures like Cliff Richard and the musical, LES MISERABLES, the miners’ strike of the seventies. We watch the horror of aversion therapy, the joy of a night out in HEAVEN under the arches, the slow decline of a delightfully gay political activist from HIV/Aids, and the instruction to educate the youth of today to history so that they can appreciate the sacrifices of the times before to secure their rights and to honour the difficult past. Sometimes the weight of the ambition of the work is too huge.

When reading the play I was not easily convinced of its clarity. The television writing form that Mr Harvey has successfully embraced, latterly in his career, sometimes makes demands of the audience watching this play that are little taxing, without the technical short cuts and expertise of that TV medium. However, the Director, Nick Curnow has made a very good fist of guiding us, mostly, through the many difficulties of style and time and place jumps. He takes us with his creative team fairly successfully through the maze. Tom Bannerman, creates simple but blissful decisions in his design solution on what looks like a limited budget. The lighting by Spiros Hristias is atmospheric and useful. The sound design sometimes errs into sentimentality, which the play does not need. Do ensure that you attend with your wits about you and do give the play its full length – this production almost succeeds in giving an homogenous whole. The cast are generally committed and focused and solid in the telling of the story. One senses a growing ensemble of mission. I enjoyed the work especially of Conrad le Bron as Billy and the difficult task that Caleb Alloway as Mickey has tried to solve. Peter McAllum and Alice Livingstone are stalwart and pillars of conviction in their tasks.

“Guilt,” says Arthur Miller, “supplies pain without the need to act and the humiliation of contrition; by feeling guilt, in short, we weaken the need to change our lives.” Tom in this play finds the reality of this and finally chooses an action over the choice of guilt. Let us hope he finds freedom at last and that he feels right in this world.

Peter Tatchell, the Gay Rights Activist, who is visiting Sydney as part of Mardi Gras, 2011, has told us, “Women and gay people are the litmus test of whether a society is democratic and respecting human rights. We are the canaries in the mine”.

CANARY could or should be an interesting experience for all as part of the 2011 Mardi Gras.
Posted by Editor at 10:19 PM