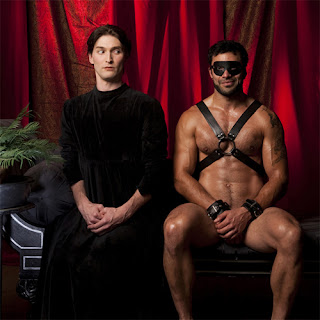 JANE AUSTEN'S GUIDE TO PORNOGRAPHY & GORGEOUS BASTARD is written, designed and directed by Steve Dawson (Who is in charge, here?) and produced by Adrian Corbett. Mr Dawson has had 44 of his plays produced. His plays have been performed in New York, Chicago, Edinburgh, London and across Australia. Out Cast Theatre, the program claims, is "Australia's longest running GLBTIQ theatre". There is advertising for an extensive 2011 season. Write it and they will come!

"Out Cast has a history of high camp productions." These two one act plays support that claim. "Camp" in a very old fashioned way, for sure. It is almost as if gay and lesbian politics has passed this company by since the seventies.

GORGEOUS BASTARD concerns the meeting of three men at a wedding reception who have all had a "vivid" relationship with the groom. All three of the characters are gay types that are instantly recognisable and the humour depends on that ready identification, served with lashings of one liners - hit and miss, both the comedy writing and the timing. Direct audience monologue and inter cut scenes are the structure (the writer has some difficulty finding believable reasons to get characters on and off stage, it seems). It is the type of comedy some of you may remember from The Golden Girls, except this is decidedly bluer and crueller. There is a thread of misogyny and maudlin, even bitter envy of happy couples, that surface every now and again in the scenarios. These "queens" have a bee sting that could shrivel you, or inflame you, or at least leave a bad taste in the mouth. They are not 'politically correct' all the time. Although the situation and the humour is predictable, most of the acting, especially the work of Todd Morgan as Tom is fun enough to keep one, surprisingly engaged to stay on for the second half (there was much nervous "fluffing" of text (?) Was the surprise the ingredient?

JANE AUSTEN'S GUIDE TO PORNOGRAPHY written in 2006 concerns a writer, Brett (Brett Whittingham) in the throes of writer's block. He has studied Jane Austen at university extensively and summons her as a mentor to solve his problem. He asks her how to write a play about love, for he declares he knows nothing about that. In turn he proposes to teach her about sex and the art of writing pornography for he believes she knows nothing of it. Write what you know, being the mantra justification.

Mr Dawson has created some very wonderful scenes and speeches for Ms Austen and Nathan Butler, impersonating the great author, is very convincing and restrained. In fact some of the scenes between Jane and Brett deserve more attention and development from the writer, for the debate sometimes became quite moving and interesting. Unfortunately, Mr Dawson does not trust his burgeoning instincts and reverts to habit, which in the case of this play ends up to be extremely puerile and in the last twenty minutes of the play unbearably self-conscious, sentimental and plain self-indulgent. The emotional claptrap that the director insists that the actors play in real melodramatic time is excruciatingly difficult to watch.

This is a Sydney Mardi Gras themed production. Horses for courses. Some will take to it, some won't. The record of Out Cast Theatre, as we are informed in the program ($5!!!) , is extensive and they actively promote a 2011 season, so there is an audience for this kind of writing out there.

I was, personally, surprised to find it curated in the Darlinghurst Theatre season. Nothing more sophisticated on offer? Hmm?

(Like the CANNIBAL advertising, the Graphic Poster Art for this production is a gross act of false advertising. Sulk!!! Is that what is wrong with me? Naw, not really).
Posted by Editor at 11:42 AM