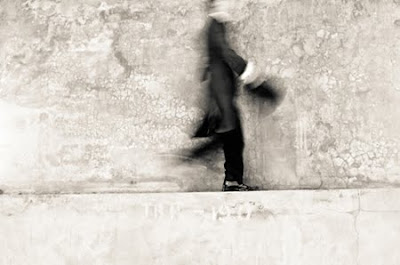 Sydney Chamber Opera has been formed by some young musicians to provide opportunity for the interested artists to have a resource and source to pursue the opera form. They wish to prevent the opera from becoming a heritage art form. They wish to make opera a vital part of contemporary life being stimulated by the youth who have the passion for the form for all the community. New music, new challenge, new life.

NOTES FROM UNDERGROUND was written by Fyodor Dostoevsky in 1864. The work is in two parts. It is written as handwritten notes of an unnamed man who has abandoned the world and fled to a symbolic underground. The first part of Dostoevsky's vision is a rambling digression on the state of humanity. The second part deals with an oppressive memory. It is an extremely difficult work to read and comprehend.

Pierce Wilcox, the librettist has passionately adapted the work as two interleaved conversations. It is the libretto that at the moment, tends to hold the work in a static dramatic place. The conversation/arguments sung and sur-titled seem to repeat themselves to no real dramatic progress. The consequence is a disconnection from the performance. I think an edit of some 30 minutes would strengthen the experience (but what and how?). At the moment the work is of some 90 minutes duration.

I was impressed by the musical composition of Jack Symonds. The variety within the orchestration was arresting and was often the centre of my attention. Just what would be lost musically, if libretto edits were made would require painful choices, but for the benefit of the work as a living organism for the ambitions of the Opera Company, it would probably be worth considering. A future presentation would, of such a provocative and interesting work, benefit from such pain.

For other than the rambling disquisition of the two characters, Aboveground (Mitchell Riley) and Underground (Morgan Pearse), this production by Sydney Chamber Opera, directed by Netta Yashchin was impressive. Set Design by Charlotte Lane, of a decrepit wooden staircase, and the post-modernist presence of a derelict pool table, that doubled as a bed and the writing desk nesting on a sea of paper was imaginatively invented and constructed within the very difficult space of the Cell Block Theatre (he modish use of portable toilet seats instead of chairs was a minor distracting excess of the need for making an auteur/directorial statement that finally seemed gratuitous). The appearance of the bust of a golden horse was a magnificent sight. That the lighting by Charles Coy was inventively atmospheric and aesthetically pleasing is an understatement of achievement, observing the practical difficulties of the space.

The costumes by Julia Young were also well conceived and seemed, despite the modernist inclinations, suitable to the overall aesthetic conception guided by Ms Yashchin. They fitted the moments and did not distract from the opera but rather securely placed the characters in both the past and the present. They made the work relevant for the time, 2011 and enhanced the experience.

The chorus of dancers (Choreography, Dymphna Carew) were used well, to further the clarification to the action of the unfolding story between the two protagonists, as were the speaking actors.

Mr Symonds and Mr Pearse were a focused and dynamic pairing. The dynamics of the individual character and the clear conflicting interaction of both were well demarcated and sustained. The singing revealed two strong and pleasing voices negotiating the scoring with control and a strong sense of the dramatics, both text and music. Anna Yun as Liza, the Prostitute and Nicole Thompson as Liza, The Madam played their less complicated dramatic roles seductively and well. Ms Yun managing to create pathos within the stereotypical literary fantasy of the men. The scoring for their voices seemed, sometimes self-conscious in striving for a musical affect (technical prowess) rather than assertive dramatic accuracy. Sonics over drama.

The orchestra conducted by Jack Symonds played well with keen devotion and sense of mood and appropriate support for the singers in this space. The sounds and orchestral sensitivities were rich, loved and passionately communicated. They were true believers in the score and the performance.

Here then, is a debut of a new work in an art form of famously formidable difficulties. The presentation was delivered without much fanfare but should be celebrated for its achievement. For the achievements of all these young artists deserves attention and support without condescension. It was an intriguing time spent in the theatre and one that I found engrossing, challenging and exciting. That this new company presented a new work was brave and certainly nailed their colours to the artistic mast and flew the flag of daring. Their next work is of a familiar work, Janacek's A CUNNING LITTLE VIXEN. Opera Australia has presented this work well, and often, I am curious as to what stamp that this new company can give the work that would justify, such a replication of repertoire.
Posted by Editor at 10:25 AM

Did you get a chance to review Cunning Little Vixen? I went to the show opening night. Would love to read you impression of this!