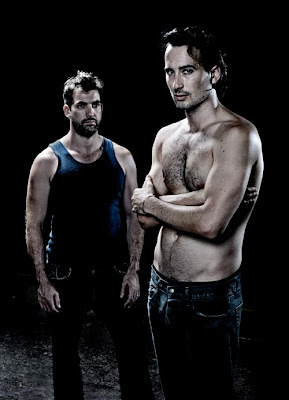 The On Reel presents STICKS & STONES by Jay Duncan at the Tap Gallery, Darlinghurst, Sydney.

Going to the theatre can be, sometimes, such a surprising and unexpected adventure. Take last Saturday night, for instance.

On a balmy but drenched and drizzling night I found my way down Palmer Street, just down from Oxford Street, but before the Burton Street corner and climbed up a steep and old-fashioned clad stairwell. It does feel so seventies grunge and properly seedy. At the top the stairs, two very casually dressed but very fashionable looking young men, took my money, but did not have tickets or programs to give me, just a flyer for the show.

I have often been to this venue, but for those of you who have not, you will then enter a "holding bay" that is stacked with non de script, very used furniture, covering, as your flesh sensitises, the feel of a squat house, with lounges, tables and mixed chairs, surrounded, on two walls with bookcases of very old second-hand books, which are for sale, by the way, and faced on a third wall with an old butcher's glass display case that has chocolates, corn chips and other manufactured confectioneries displayed in it. You can also have a glass of wine or some beer or, on some nights an espresso coffee. That will depend on the competency of the wait staff who look like they have just awoken, Rip Van Winkle like, from a four decade sleep. The competency varies I have found.

If you are lucky (?), there is in a large space, white room, off a centre doorway on the fourth wall of the "holding bay" where sometimes there is an art display. Tonight there is. Some fairly primitive, framed and unframed paintings, mostly of horses or zebras. Other specimens of zoology are attempted as well. There is a portrait as well. They, too, are for sale. There is a catalogue with prices.

This could be a discouraging, destabilising atmosphere for some theatregoers, but it does have a feint charm if you squint, fondly reminisce and are generous. On this occasion worth doing.

On time, despite the fact that the working clock on the wall behind the butcher's display case is literally a half hour behind the actual time, a bell was rung and we entered a long narrow passage, hung, with presumably, relics of other exhibitions of unsold paintings, accompanied by an atmospheric surround sound. The theatre space is a small rectangular shape with seats, made up of throw outs from both, old theatres and cinemas, probably local, that you can recall once occupying elsewhere.

The action of the play begins immediately. It takes place against two black walls and a black floor. There are three orange stack chairs and in a corner and old water cooler on a shabby prop plinth. It has white plastic cups. Clearly this company is working on a shoestring budget. In the looming darkness, before the lights go down we can see a male figure in tradesman's navy blue singlet and shorts, coloured football socks but only one boot (Paul Hooper), with his back to us, reciting re-assurances to himself as the noisey soundtrack (Sound Design by Nick Tsirimokos) reaches a crescendo and another actor in grubby jeans, shirt and greasy hair (Jay Duncan), stumbles and falls into a corner of the space.

What now ensues is an engrossing sixty two minute performance of a new Australian work by a first time writer, Jay Duncan. Two men, who, at first appear to be disconnected, find themselves in a waiting room and are pitched against each other by a disembodied voice, and find that fate has delivered them to this space to illuminate their fate filled last moments, so that they are never left wondering about what happened to them so suddenly in the world. They discover they have much in common, this gay sex worker and this carpenter/father of two. A young man is disputed 'property' for both. That they are both dead is the prompter of searching for truths. Each history informs the other.

What I resisted early about the cliché of world and character of this set up in the play was quickly brushed aside as the committed urgency of the two performances and some of the viewpoints and/or circumstances in the text aroused my curiosity and completely arrested my subjective attention. The atmosphere of concentration of the audience became palpable and a very thrilling experience was had – more thrilling perhaps, because it was unexpected.

Mr Duncan and Mr Hooper give full support to each other in the work and the characters that each has drawn are fully motivated and alive. Passionately convicted. The Director, Gabriel Dean Fancourt has honed, guided and urged this work and workers into a visceral experience that is worthwhile catching. It is beautifully staged and conducted with a musicians ear to tempo. Actors committed to communicating to their audience. Fast and gripping.

Mr Duncan, acting in his own play, has written a very arresting first play. He says he has three or four others: this is his first produced work. If this text is indicative of the talent, he is certainly worth a further gander.

Do go for the trip back in time at the venue and for a very good night in the theatre. Recommended. A new Australian play and talents worth noting.
Posted by Editor at 10:40 AM