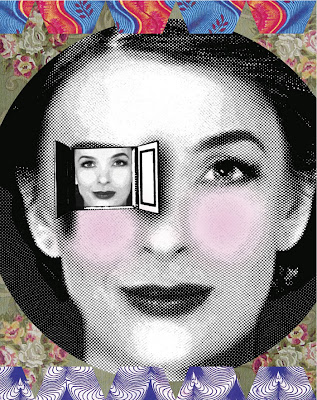 “If Henrik Ibsen and Oscar Wilde had decided to collaborate on a post-modern drawing-room comedy, the hotsy-totsy twosome surely would have turned out something very much like Sarah Ruhl’s genuinely hysterical new work,” (Theatremania).

This is a quote from the Sydney Theatre Company’s advertisement for the show. It is a delightfully pitched idea, and I tend to agree with it.

Sarah Ruhl is one of the new American writers making a splash, through dint of hard work, not only in the USA, but around the world. I believe this is the first of her works to make it onto the stage in Sydney (?). Her other plays, for instance: THE CLEAN ROOM, PASSION PLAY, DEAD MAN’S CELL PHONE, are usually much more ‘complicated’ in their writing styles and conceptualisation and appear to be a little more daunting for the other theatre-makers and ,maybe for the casual theatre-goer. The “Next Room, or the vibrator play”, is not in its construction or linear journey at all unusual, and presents on the page, no comprehensible problems. This may be why this is the first of her plays been seen in Sydney.

This play was a finalist for the 2010 Pulitzer Prize, originating at Berkeley Repertory Theatre and playing on Broadway in 2009. Pamela Rabe has directed for the Sydney Theatre Company, a sumptuously loving and detailed production of a delicious comedy with some female politics of the most interesting and arresting kind (certainly, if you are male, for sure).

Set in the United States at the introduction of electricity into the home, it seems, sometime in 1902, (around the time of the electrocution of Topsy, a Coney Island elephant, with high voltage AC current – a fact mentioned several times in the play!). The location of the action of the play takes place in a double space of a waiting/drawing room of a doctor’s surgery and the doctor’s surgery. This doctor, Dr. Givings (David Roberts), has developed a scientific interest in the curing of ‘hysteria’ in women (occasionally men) and has a speciality treatment using the latest electrified vibrator. It is effective and fast (3 minutes being the usual time for the paroxysm of relief for the patient. When that fails the older method of manual manipulation might be employed – it can take quite a considerable time, up to 3 hours!) The Set Designer, Tracy Grant Lord, has created a beautifully articulated design. Its details of the Victorian period seem to be pleasingly comfortable and just right in the drawing room. The demands of the text for the re-creation of the cumbersome, electrical vibrator mechanisms of the surgery must have provided much fun and research in the Sydney Theatre Company’s property making department for they are both fascinating and formidable in their appearance and workings (at least the sound is convincing of actuality)

Yes!, we do get to see them used. Quite often. Firstly, man to woman. Later, woman to woman. Then, man to man (using a special vibrator called the ‘Chattanooga’). This is all done in real time. That it is not in the least offensive for the audience, quite the contrary, it is the cause of much hilarity, is a testament to the clever scientific approach that Ms Ruhl has introduced in her scenario, along with the seriousness of the doctor, nursing staff and patients in their Victorian pursuit of cure and good health. Being of the 2011 audience, we are a little more knowing then the characters themselves, about what is happening. It is audaciously amusing, for us. Ms Ruhl in her writer’s notes explains her method: “As the nineteenth century doctors were discreet, so is the play; much of the action takes place under a clean white sheet. As I wrote and researched the play, I was interested in the radical or wilful innocence about sexuality, on the part of both doctors and patients.” It is the silence about the sexual life of the human animal that this society maintained that is expressed and examined here, and there are some very interesting observations of various matters that are delightfully brought to our attention that are gently revelatory, and in my experience, not really mentioned in the theatre before.

Dressed (and undressed) impeccably in Victorian garb (Costume Design, Tracy Grant Lord), Mr Daldry (Marshall Napier) escorts his wife, Sabrina Daldry (Helen Thomson) to Dr Givings surgery for treatment of her extreme symptoms of hysteria. That the good doctor along with his expert nurse, Annie (Mandy McElhinney) go about this treatment in such a matter-of-fact, scientific manner and bring such obvious relief to the patient, it makes the doctor’s wife, Catherine Givings (Jacqueline McKenzie) extremely curious as to what is going on in the next room. Catherine, a new mother, is clearly, to the audience, suffering from a case of post-natal depression and manifests a growing hysterical illness, which her good husband, in his devotion to his pursuit of science fails to detect, is, in fact, ‘blind’ to his near and dearest’s symptoms. The companionship and growing combined interest in the treatment that Catherine and Sabrina develop, causes many wonderful ‘curiosity’ driven discussions and interviews, facilitated by the presence, also, of a professional wet nurse, Elizabeth (Sara Zwasgobani) and, later, a sophisticated artist-patient, Leo Irving (Josh McConville). Much illuminating and amusing subject matter is covered.

The cast, is mostly, exemplary.

Jacqueline McKenzie gives a performance of great comic and dramatic subtlety. Alive to every second of her opportunities, Ms McKenzie walks a tight rope of delicate and pathetic observation of a woman desperate for communication and openness in her world, especially from her frustratingly Victorian-male husband. Torvald, Nora’s husband in Ibsen’s A DOLL’S HOUSE, appears in contrast to Givings, a sentient being of measureless empathy. That Catherine, achieves relief, in a deeply moving climax of vulnerability at the end of the play, not through a dance of a hectic tarantella, but through the coaxing of the making of a snow angel, naked, outdoors, with her partner, tells much of the skill that Ms McKenzie has used to take us there, to this moment, that was supremely satisfactory, if, otherwise, possibly, over-the-top. In my last blog on Belvoir’s THE WILD DUCK, I wrote a long diatribe of what I perceive as contemporary development in acting styles in the theatre, and Ms McKenzie gives an example of that acting style that is vital, thrilling and immensely occupying. A great performance illustrating her ‘mastery’ of her art form.

Ms Thomson in her comic creation of Sabrina Daldry is subtle and clever, easily up to the height of success that she revealed, two seasons ago in the Yesmina Reza’s GOD OF CARNAGE in this same theatre. In contrast, to the techniques of Ms McKenzie, there is a knowingness of style that she makes aware of, that separates the two performances in technique, both rewarding, but noticeably different. Mr Roberts is remarkable in his discipline to play within the needs of the “straight-man” role of Dr Givings, that the comedy requires. Similarly with the work demands of Ms McElhinney as the quietly practical nurse, Annie, of the manipulative skills she must sometimes engage with. Mr McConville is also amusing if not always sure whether to play it straight or underline the potential laughs – he, more often than not elects for the laugh. I wonder, if minutely, at the expense of a more fully comprehensible and empathetic character. Ms McElhinney has a better balance.

The Lighting design by Hartley T A Kemp is immensely complex (although, there were several remarkable operational errors at our performance) and has pleasing pictures, especially in the last “snow angel” sequence where with the addition of the compositional score of Iain Grandage creates a transcendently moving conclusion to the play. Mr Grandage’s work a positive advantage to the efficacy of the production.

Pamela Rabe has created a complex, sensitive, beautiful and satisfying production and experience with all the ingredients she has chosen and wrought for Ms Ruhl’s play. The accumulative confidence witnessed, back in her work on THE SERPENTS TEETH and ELLING, both, for this company, several years ago, paying off with this material and production. Just how important it is to have a woman’s/female voice on our stages in terms of the possible breadth of the theatre experience, in 2011, can be perceived here in the Drama Theatre. Ms Ruhl’ world perception is unique, amongst too much recent repertoire. That a woman has so handsomely and delicately taken interpretative charge of this playwright’s play can also not be undervalued. On the night I saw it, maybe two thirds of the audience were women and the pleasure that they expressed with the material on stage was as interesting to me as to when, several years ago, I attended at the American Conservatory Theatre’s production of August Wilson’s MA RAINEY’S BLACKBOTTOM with an audience ninety percent African-American. The attention and thrill expressed by that San Franciscan audience in seeing their culture so knowingly written and performed on the stage, was as palpable as the audience response in the Drama Theatre for Sarah Ruhl’s “In the Next Room or the vibrator play”. Not that the women were the only enthusiastic respondents. The whole of the audience were seduced and rapturous. Amused by the first act and then moved by the second.

This, at last, is a highly satisfactory experience from the Sydney Theatre Company.

1. The $10 program from the STC is almost worth the information value this time round. Despite printing errors, an improvement.

2. The Sydney Opera House is still charging a service fee of $5 for me to buy my ticket at their Box Office, before the show, with cash! Total cost for my ticket then: $94. If the production had been in the Company’s own theatre, maybe, I could have afforded a cup of coffee!
Posted by Editor at 3:49 PM

I found this review to be best and most useful in terms of my being able to relate to the experience I enjoyed while attending the performance. Thank you!