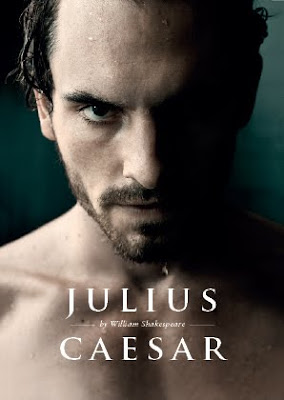 Anthony Skuse is a director of some skill. His work in Sydney has been consistently impressive: BUG and REFERENCES TO SALVADOR DALI MAKE ME HOT at the Griffin Theatre, for instance.

This Julius Caesar at the New Theatre has some truly beautiful visual aesthetics. The lighting by Matt Cox is astounding for its atmospheric control and sense of narrative detailing. On the large black stage space, flooded with haze, the focus of light is centred on a small square, centre stage, into which the actors enter in full light or peripherally. Around the edges of this principle action-place, light appears and disappears and the shadow of conspiracy in the relative darkness is the dramatic effect. The sometimes semi-clad actors with casual battered wardrobe is contemporary in inspiration (Costume, Casandra Pascoli) and underline the masculine energy of the play and gives it a sexuality that is palpable.

Along with this visual flair, Mr Skuse has adapted and directed the play with theatrical invention and integrity. The final, usual confusing act of civil war on the Plains of Phillipi, in Shakespeare's text, cleverly and clearly delineated with a flourish of inherited absorption of past masters, that he makes his own. A still almost choral reading of the text and action. These are the virtues of this production. Looking at the images created on this stage and the control organised by the director and lighting designer reminded me of recent video paintings of Bill Viola e.g. LOVE/DEATH and THE TRISTAN PROJECT) - both transfixing.

This production mounted with a school audience in mind, that may be studying this text, fails in every other way, not only for the students, but also for the ordinary audience, who without pre-knowledge of this text, might find it a very difficult experience to comprehend. Character and narrative fail to be revealed. The inexperienced vocal skills/aesthetics of most of this cast is not of a quality that permits communicating clarity of storytelling and certainly not the poetic gift of the English language of Shakespeare's world.

Kurt Phelan (Cassius) certainly, uniquely in this production, has a firm hand on his responsibilities and reveals an urgent energetic sense of controlled character revelation and narrative shaping. Shameer Birges (Brutus) speaks well but does not yet have control of this text to demarcate intellectually, clearly or accurately, the character's needs or motivations. This Brutus an insecure reciter of lines. Kipan Rothbury (Casca) lacks any real skill vocally and substitutes energetic nasal bluster for storytelling. Petr Vackar (Mark Antony), has the appearance of a Hollywood warrior, but as yet, no skill to speak this poetry or argue the arguments, other than with the strains of an actor using English as a second language. It is not intelligible, let alone useful in dramatic story telling. Mark Langham (Caesar) muscles his way through the text and errs into energetic pitch and volume as a substitute for character delineation. In lesser roles, Mark Dessaix (Lucius) and Suzanne Pereira (Portia) make impressions.

If only one of the five character pillars of the arguments of the play, Cassius, is being rendered anywhere near technical proficiency, this production of Shakespeare's THE TRAGEDY OF JULIUS CAESAR is doomed.

None of the usual discussions around interpretive choices by this artistic team in presenting and solving this play through the intricacies of the poetics can be offered up. The visual aesthetics and the perceived gifts of Mr Skuse are obliterated by the choice of the artists given the responsibility and opportunity to explore this play for audiences. For this Mr Skuse may have had to sacrifice some of his visual choices for vocal and verbal aesthetics. Without voices, sensitive and flexible for speaking the great challenges of the greatest playwright in the English language, the play and production cannot succeed.

A discouraging night.
Posted by Editor at 9:01 PM