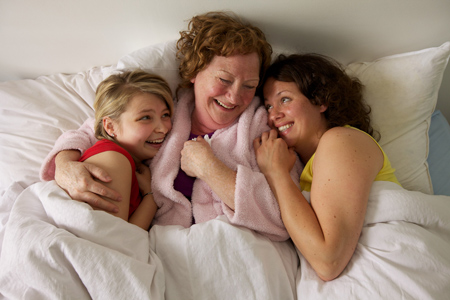 LITTLE GEM was premiered at the 2008 Dublin Fringe and won a number of prizes, including Best New Play. It subsequently went to the Edinburgh Fringe Festival, won the Carol Tambor Best of Edinburgh Award and toured to The Flea Theatre in New York in 2009.It also won the Best Theatre Script awarded by the Irish Playwrights and Screenwriters Guild.

This modest touring production (Directed by Paul Meade) presented by ARTS PROJECTS AUSTRALIA has been doing some of the arts circuit in Australia. A simple back painted wall on which, occasionally, some images are projected, three chairs, a lamp stand and an oblong of carpet, three actors dressed for today, and you have a very budget conscious production, sitting sedately in the relative vastness of the stage space. Great for touring: will fit in most spaces, little setup, the lighting is rudimentary, and relatively cheap.

Three very competent actors, Birdy Beaman (Amber), Neilí Conroy (Lorraine) and especially Anita Reeves (Kay) play three generations of women in one family (it takes a while to tune your ears to the Irish dialect). In three interconnecting, interleaved monologues they recount the times of their lives, about the passing of Gem (James), Kay’s husband and the arrival of Little Gem, Amber’s baby. Death, birth, marriages. Courtships, sex and condoms, a penchant for alcohol and, yes, vibrators, are covered.

That this is written by a woman, Elaine Murphy, and that three women make the entire cast is of interest to me. But unlike the Sarah Ruhl’s play “In the Next Room, or the Vibrator Play”, the emphasis here is definitely on folksy charm, and has very little politics, even of a gentle kind. Coming out of contemporary Ireland, wrecked by the Global Financial Collapse, this work definitely feels like a cosy anaesthetic, a coma inducing respite for its first audiences: the Irish. Charming, comforting sentimentality of the lovely blarney kind. The kind of story telling writing we have in the plays of say, Peter Kenna: A HARD GOD and especially THE SLAUGHTER OF ST. THERESA’S DAY. Still, even in the Seymour Centre, Sydney, it was enough for most of this audience, with quite a number of Irish expatriates in the house, judging by the pre-show and post-show conversation lilts.

It is a satisfying but definitely thin night in the theatre. That this play, which is hardly a play (virtually three monologues, no interaction with each other for these characters, it feels more like a radio script) was awarded Best Play by the Irish Playwrights and Screenwriters Guild tells us something of the state of playwriting in Ireland (where is Brian Friel?) and makes what is happening here in Sydney creditable. It could probably, read just as satisfyingly, as a short novel.

If you want a nostalgically easy night in the theatre or are of Irish heritage and you have the money and time, why not? Otherwise watch your telly and the soaps in the comfort of your own home - just as reassuring and restful.
Posted by Editor at 12:06 AM