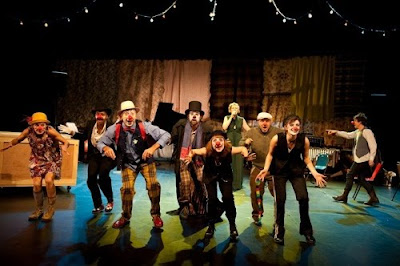 SIREN THEATRE CO presents AS YOU LIKE IT by William Shakespeare in Bay20 Carriageworks, Sydney.

AS YOU LIKE IT begins at court where Dukes have usurped Dukes, brothers have fought brother, and daughters are separated from families and become 'sisters' to unite and run off into exile. All end in the Forest of Arden. This mythical version of Arden - "a sylvan sanatorium for the political exiled, the lovelorn, and assorted undesirables...it's topography being a fantastical mixture of flora and fauna, including snakes, lions, and palm trees." It is where magic and the balm of nature gives room for goodness and humanity to seed, grow and bloom.

This is a play of affairs of the heart. Love. Of loves that ends in marriages (four of them!) and the choice to live a life of contemplation, "converted from the world...". Harmony is re-established and a ritual fertility dance concludes the journey. AS YOU LIKE IT along with TWELFTH NIGHT and A MIDSUMMER NIGHT'S DREAM is one of Shakespeare's greatest comedies.

The diversity of characters and the opportunity that that gives Shakespeare to explore the ploys and wit of loves pursuit through a range of class and intelligence is a rich gold mine of romantic comedy argument and quotes:

"O coz, coz,coz, my pretty little coz, that thou didst know how many fathom deep I am in love."

"Sell when you can, you are not for all markets."

Shakespeare in his invention to prevent a night of all cloying romance also gives us Jacques, a solitary voice in this play of pairings who emits a steady stream of mocking commentary that undercuts almost every idealistic thought or act. Melancholy Jacques who "can suck melancholy out of a song, as a weasel sucks eggs". Melancholy Jacques that gives the famous "Seven Ages of Man" speech where life, from birth to death, is described in terms of bodily functions and physical disintegration and warns that every part of life is a brief scene in a larger drama: "All the world's a stage....". It is he who warns that far from being the capstone of existence, love is a passing whim. Add to this one of the lovers, Touchstone, who true to his name tests the mettle of every person he meets with blistering comment and argument: "We that are true lovers run into strange capers; but as all is mortal in nature, so is all nature in love mortal in folly." A cynic, to relish, however tedious he may appear.

Kate Gaul as producer and director of AS YOU LIKE IT, follows on from her other Siren Theatre Co productions of classics, RICHARD III and THE SEAGULL. This production is much more ambitious then either of the other two and with a company of ten actors, mostly playing multiple roles and other responsibilities (magic tricks, singing and dancing), along with two musicians (Daryl Wallis, Composer/piano and David Manuel, percussion) has created an epic and musically expansive exploration of the landscape of Shakespeare's play.

The company of actors demonstrate a wide difference of skill and experience with this kind of text and play and, unfortunately, it hampers the full flowering of the ideas of the production. Still, along with the vocal coach (Natasha McNamara), Ms Gaul, has coaxed some delightful clarities of textual interplay and illuminations of text. And as the production moves on in its playing time, it finds an equilibrium of mode that allows the play's genius to be revealed and appreciated. Given time the players may find even more means to relax and open the treasures of the play for the audience. Mostly there is technical effort in the speaking of the text and physical embodiment, ownership, is not as usefully communicative as it could be (mind you, the multiple tasks of costume and make up changes that all of the company are required to do, and often, may have been distracting and a cause of tension and unsureness). The production, as yet, is not all of a piece. The look is motley, indeed (no set designer named).

Ms Gaul has demonstrated a fearless vision and determination to present work of breadth and adventure with her own company, SIREN, and at her own expense. Her work on RICHARD III (2009) with a small company of dedicated actors promised a development of ensemble and textual interrogation that was worth looking forward to see develop. That only one of her RICHARD III company is in this production is a disappointment. THE SEAGULL ensemble, as well, is totally different. This is the difficulty when the resources to maintain and develop an ensemble is not possible and for Ms Gaul it must be indeed galling (no pun intended) to have to teach from the start every time she launches a new creative project.

In the politics of theatre companies and the choice of artists given the opportunity to work and flourish, historically, not just in Sydney, one has seen some talent, unaccountably under rewarded and invested in, and so no real chance to flourish. In recent observation, I would suggest that Kate Gaul and Anthony Skuse, both brave and tireless (so far) toilers in the theatre, have slipped between the cracks or have mis-timed their presence, and need to be given opportunity alongside the younger 'hotshots'' of the moment.

Both the recent JULIUS CAESAR at the New Theatre, directed by Mr Skuse and now Ms Gaul's AS YOU LIKE IT at Carriageworks are worth recording. The work of these two directors is intelligently informed in the texts dramaturgical possibilities - depth- not much superficiality there. Close textual reading, galore. They appear to be steeped in the larger trends and history of international production fashions and styles and have the rare capacity to select and abrogate, integrate their own vision and skills into fabricating work of interest and originality. That they are, relatively, hampered by not having regular, reliable or experienced artists to work collaboratively with, must be, at some point, heartrendingly distressing. Like Sisyphus they keep having to roll that rock up from the bottom every time.

If I had the where-with-all, I'd give these artist a go. They have earned their opportunities and I believe we could find over time, these two artists, could give the Sydney scene some depth to counter the emotional enthusiasms of some of the badged, under experienced artists that have been, maybe, promoted too soon to our main stages. Besides these two artists, I am sure that there are others, as well.

It is with gratitude that I find Richard Cotterell will have some work of his on at the Sydney Theatre Company later this year. How are he and other artists of such credible ability not represented in the artistic enterprises of our times, on a more regular basis? Their experience would be incredible for some of our artists to benefit from. Why are so many relatively, untried, but names -usually actors- international and local, taking precedence in directorial responsibilities at the Sydney Theatre Company? The Australian penchant for the new with such discursive regard and usage for the elder artist in this country is flabbergasting and reflects the immaturity of our culture.

Look at the world creative scene and show me another culture so dismissive of the wisdom and experience of its great and older artists. We should be standing on the shoulders of our elders. They have seen and can help us see. The wheel will, possibly, not have to be re-invented.

AS YOU LIKE IT is a great play. This production does not blight that greatness. To hear the language is some reward in itself, considering the literary quality of most new work we hear on our stages. And Kate Gaul is worth attending too. Her body of work, in its preparation, vision and courage is collectively rewarding.

1.Shakespeare and the Goddess of Complete Being- Ted Hughes. Faber And Faber 1993.

3. The Complete Works Of Shakespeare-Illustrated. Avenel Books. New York 1975.
Posted by Editor at 1:03 AM