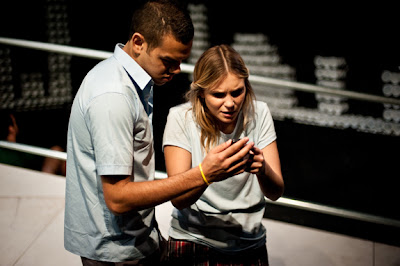 One of the strengths of Lachlan Philpott's playwriting so far has been the sense of deep authenticity that he brings to the worlds he explores in his plays. BISON (2000-2009) and COLDER (2007) have powerful and grave impact, particularly, as Mr Philpott's point of view is embedded with 'real' knowledge and creative identification of the characters and the events of the action of the plays. He has first-hand 'knowledge' of what he writes. The plays have the pulse and wealthy inside knowledge that only connected, close, lived observation can give. Part of their power is the exposition of worlds and behaviours never so authentically spoken of before, in Australian dramatic literature. The voice is brave and fearless. The result is confronting and enlightening, if you are not from those worlds. If you are, it possibly gives relief, that it is been told out loud, at last.

One of the other defining elements of Mr Philpott's work is the "fluid and musical", poetic stylistic devices which he employs.

"...(he) doesn't rely on dialogue as the main element of his dramaturgy but more interestingly adopts a range of linguistic devices to create a world that is both external and internal to it's characters ... particularly a 'scene-setting' narrative voice that often does not belong to the character, or (he) voices their internal thoughts, (and) creates the atmosphere around characters" (Noel Jordan, 2011).

The verbal dynamics and intricate adjustments that the actors require in performance are formidable and demand a focus of concentration and a technique of great security and flexibility. The text at its best has the collective possibility of a sound poem - a musical 'tour de force' that requires all the players to work in a very tight ensemble, not only as characters, interacting in the Stanislavskian 'cause and effect' but also as musicians intimately alert to the pace, pitch and volume of the other actor/instrument offers. The beauty of Laclan Philpott's intentions are potentially great.

In the case of SILENT DISCO a tightly held 'orchestral' quartet of voices and sounds is required to do justice to the potential of the script. Not only do the actors have to tell this story and create characters (some more than one) but they need to listen to the musical readings of the others to keep this work afloat for the true transcendency of the 'scoring' of the material, which otherwise could appear to be mundane soap-opera, sit-com dialogue and situation from a realistic early evening television series (HOME AND AWAY, NEIGHBOURS). What the four actors require is a thorough confidence with the text (notation) and the sensibility and ensemble sensitivity of a top flight String Quartet. Say, the Emerson String Quartet playing, say, Shostakovitch. The play needs to be conducted, musically directed. A baton would be, should be, essential in the rehearsal process.

SILENT DISCO is set in the time of hormonal explosions of middle adolescent growth, belonging to Squid and Tamara, centred in and around the school room and, in this particular, dysfunctional and deprived worlds of the broken home environment. The consequences of both these circumstances are volatile and saddening in this vividly observed script. Mr Philpott's stunning accuracy comes from his own family of generational high school teachers - his father and his self. He once again speaks with a truly authentic voice.

"It aims to celebrate school communities.... There are many films and plays written about schools. Some try to impose a hero's journey on the world they represent and in so doing belie mundane rituals and monotonous routines that make most school days endless and forgettable... Within schools.... young people learn how to relate to each other. They also forge important relationships with teachers… In this play I focus on these relationships in the context of the school community because I am aware that these communities play pivotal roles in connecting people - allowing them to understand each other and in turn themselves. " (Philpott, 2011).

SILENT DISCO shows us what happens when such connections fail.

The central character is Tamara (Sophie Hensser), and director Lee Lewis has, indeed, found a young actor who looks as if she has barely left school herself. Ms Hensser has the look and brings a frightening sense of self-identification to the character. The generalised adolescent attitude, the ease of body and street vocalisations appear comfortable and totally embodied. The reality of the performance is such that it looks as if it has just been taken from the street and put onto the SBW Stables stage without any real theatrical focusing or rehearsal choice for the writer's thematics or story. Unfortunately the real world is a very different place to the SBW Stables Stage. Even in this small space there is a need for real craft and skill, that is essential for the responsibility of this central role. Vocally, Ms Hennser, gabbles her text with no clarity of story telling or sense of what it is important for the audience to hear. It spills out of her character with the impression of everyday conversation and has no sub-textual thought process to reveal the characters motivations. Tamara appears shallow and superficial - true to life, but not very interesting in the theatre where it should appear to be true to life, but actually be organised for story telling clarity. Hence, Mr Philpott's text, consequently, sounds shallow and superficial. It has no real focused control or apparent technique. So, Tamara, despite the writing opportunities given to Ms Hensser, stays in the 'brat camp' providence - a bright young girl, handicapped by her neglected nurturing, and not much else is intimated about Tamara, by this relatively inexperienced actor in her performance.

Ms Lewis has taken a calculated risk in this casting. She wins in the realistic believability of the look and sound of her principal actor/character, and it is momentarily transfixing, but loses in sustaining interest, in the inability to help this actor to bring the technical prowess that Mr Philpott's script requires, for it to elevate above and beyond television acting/production styles. This production, then, as time passed, stayed on the ground.

Ms Hensser's central role dominates the possibility of the other actor's development in the playing style. As Ms Hensser stays within a very limited playing style and has not a real sense of playing to and with the other actors, not ever really listening to them, the level at which they can create is inhibited. The essential musical score of Mr Philpott's writing is impossible to create or take flight and the experience of the play becomes uncomfortably ordinary and could feel banal in its two act scheme. Camilla Ah Kin has the potentially interesting role as the sympathetic teacher (and others) but has her task muted with no tangible connection coming from Ms Hensser, her principal playing fellow. Meyne Wyatt , coming off a spectacular debut in THE BROTHERS SIZE, in the recent Griffin Independent season, still glows with an energy and insight and especially in the scenes with Ms Ah Kin sustains that sense of his potential - it shimmers with vulnerability and intelligence.

Ms Lewis creates with Justin Nardella, their usual black and white abstracted design solution and I felt was not a very balanced use of the Stables space, with the 'classroom' space inhibited by the sculptural floor ramps of the focused stage area. Stefan Gregory as both composer and sound designer makes a supporting input to the production.

SILENT DISCO like the other plays of Mr Philpott I have seen has not had the musical preparation that I believe makes his work, potentially, special and great. Still, the reaction from others on the night I attended was pleased. I just believe Lachlan Philpott writes stylistically much more complexly than I have yet, seen delivered.

Kevin, I read this a few days ago and was surprised how "stern" you were about Sophie Hensser's performance - rather drily and academically I thought (I felt the same way about your dissection of the acting of Albert in Capture the Flag). I thought this a dramatic edgy play about adolescence and all of the actors captured this well from the viewpoint of myself and my friend (a high school teacher who totally got it). For me I would not be surprised if this was one of the plays of the year for me (already) and it is early days. My thoughts only of course.

Mr Mink,
As I explained my concerns about the acting for Albert in CAPTURE THE FLAG, in my reply, (see Comments at blog), so, differently but with the same passion, I tried to explain my discontent with the young artist's work in SILENT DISCO. Dry or otherwise.

I agree with you that SILENT DISCO is perhaps the best new Australian play of the year, so far. But, to distinguish and seperate the two,  the production is not, for me, because of the uneveness of the acting skills and lack of attention to the musical score and rhythms of the text, that mark Mr Philpott as an extremely wonderful writer, not yet honoured with the detail of preparation he requires. The poetry of the writing married to very astute observations of some parts of our contemporary world.

Interestingly, I feel that Mr Shinn (THE COMING WORLD currently playing at the Darlinghurst Theatre) has a similar accurate world and points of views and a marked skill in the written expression of it. That Caroline Craig, relatively, achieves to reveal this with her actors, is indeed worth appreciating. One that Lachlan Philpott's work has, in my estimation, has not had in Sydney yet.