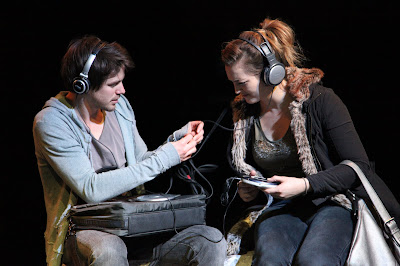 THE COMING WORLD is a relatively early play by young American playwright Christopher Shinn. The Darlinghurst Theatre Company have also presented another of his works, DYING CITY  a few years back. His latest play, PICKED  has just had a rapturous response from the press and public in New York this past April/ May. Mr Shinn is a playwright worth getting to know. (OTHER PEOPLE, WHAT DIDN'T HAPPEN and WHERE DO WE LIVE).

A young woman, Dora (Cheree Cassidy) finds herself dealing inadequately, with twin brothers, Ed and Ty (Ian Meadows), one a hyped drug-dependent, enmeshed in the webs of low-life crime, the other an independent but 'lost' young man.

Constructed beautifully, in several intense scenes over a short sixty minutes, the play unravels in halting, haunting conversations, counterpointed with pauses and silences, that demand - you - the audience, fill in thought gaps and endow emotional compassion. But with care - for these people may or may not be worthy of your responses. The emotive sound scape by David Heinrich, subtly urges caution with its rich atmospheres, on the outer edges of your consciousness, almost another character.

Caroline Craig, directing this play subtly and with detailed passion, has cleverly cast two attractive young actors: Ms Cassidy and Mr Meadows (two WAAPA Graduates). They trap you with the appeal of their physical presence and one gives empathetically to Dora and Ed/Ty with ready ease. But, as well, these are two wonderfully gifted actors, and they give both independently and as a finely tuned duo, nuanced and hyper-delicate readings to these bruised and confused people. It is a pleasure to watch the trust and surety between these two actors - one feels remarkably safe in their dynamic artistry.

So, at last, a good play, more than well acted, supported, with integrity, by the other artists, guided by a director who is moved to reveal the writer's story and intentions without drawing attention to herself. This production has been created to include the audience in a creative participation. The reward is great indeed.