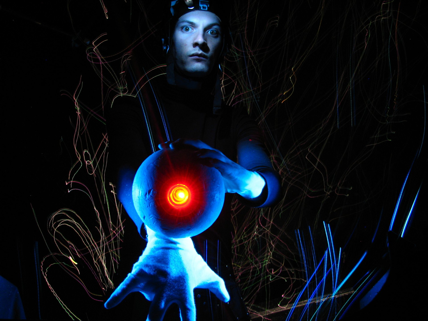 Using computer graphics and moving images and wonderful puppet creations, funny voices, a reasonably played ukulele and a soundtrack including sounds innocently and, for me, nostalgically like Human League's 'ELECTRIC DREAMS', Mr Watts tells the story of the hero, Alvin Sputnik, that conjures up feelings of good vibrations and bitter-sweet melancholy.

The ice cap has melted, the islands and world cities have been flooded. Alvin's wife dies and in search of her spirit that has plunged into the depths, he volunteers to attempt a rescue of the human population, maybe at the risk of his own life. An eco-play for young people it is an experience that no adult should miss.

For the whole population of all ages, I promise you, you will be positively delighted and invigorated. A hit at the last Sydney Festival, in a short season schedule, you'd be crazy not to go and take all of your friends. They will owe you big time.

P.S.
You can also catch this show at Campbelltown Arts Centre (NSW) on Thursday 14th June (7pm), and Wednesday 15th June (10am and 1pm). Check the Weeping Spoon website for more tour dates.
Posted by Editor at 11:12 AM

I saw this show 2 Adelaide Fringes ago - I'm so glad that it is getting a wider audience. He is such a beautiful performer - and I agree, go see it! It's pure, magic theatre. Theatre Magic.