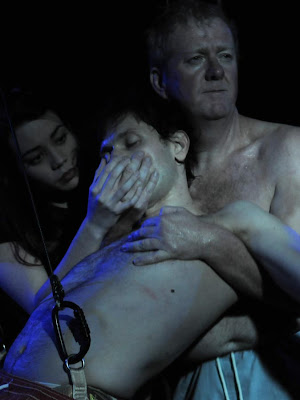 THE KISS directed by Susanna Dowling, is a staged reading of four short stories, unedited for the stage, by Guy De Maupassant, Peter Goldsworthy, Kate Chopin and Anton Chekhov. What all the stories have in common is the action of a kiss. “They (the writers) reveal a kiss to be a marker of something changing forever; a transgression; a boundary crossed; a door opened…. Each story has a strong sense of foreboding of what comes after the kiss – regret, compromise, disillusion, pain, a loss of innocence.”

The four actors, Catherine Davies, Rita Kalnejais, Yalin Ozucelik and Steve Rodgers and Ms Dowling have collaborated on a form for sharing the spoken text and inventing, sometimes, very imaginative physical interactions to accompany the spoken word for the purpose of illustration of these short stories for the audience.

The most successful rendering in the dramatising, within the short story literary form, is that of the Peter Goldsworthy kiss. Telling of two young men’s drunken bravura which results in their entrapment in a water tank and their ultimate demise, the employment of two harnesses that suspends the two male actors, so that they can give physical conviction to their floatation and swimming in water is vivid and visceral. Drama convincingly created and the result was a remarkably complicit audience participation. Mr Rodgers and Ozucelik especially convincing in the telling of this tragic tale.

The other stories suffer in their production mostly from theatrical physical inventions that while ‘cute’ and 'fun' hardly rises above that of early exercises in a drama school first year training program. For instance, the multiplicity of event and characters of both sexes in the Chekhov (the last in the program) as well as the narrator’s voice in various moods of observation, necessitates invention from these actors, make-up and costume choices that are ludicrous to the mood of the story – so much so, that Ms Davies and Kalnejais often found it so amusing, that they broke the spell of their creativity by laughing at their and the other actors ridiculous choices, and caused the audience to suspend their belief in the confection of the task. Besides, this story was on the lengthy side and the actors seemed to find it hard to keep the audience engaged over its length- it was placed last in the evening’s program. In a three-quarter round seating pattern it is sometimes difficult not to see the audience members nodding off or checking their watches.

The Kate Chopin offer was brief and unfortunately thrown-off by the actors with not as much focus as it may have deserved.

I would have felt that the quality of voice would be a major, if not the major pre-requisite, for undertaking this task. Both Ms Davies and Kalnejais, whilst having the actor’s innate imaginative and emotional impulses for the moments in the stories seem to not have the necessary vocal techniques for the accurate, let alone beauty of expression, that is required to keep the audience engaged in this word heavy and alien dramatic usage of words and rhythms. There is a greater burden on the actor’s vocal technique, apparently necessary, in this literature form, to present it on stage sustainably. If the audience closed its eyes it is akin, or should have been, to listening to a radio play. (In some instances, even accuracy: “Whatcha” for “what you” or “wena” for “went to”. Simple consonant accuracy replaced by emotional posturing – irritating.)

Thus, the responsibility that Ms Kalnejais had as a soloist in the Guy De Maupassant story was charming in its coy visual sensuality: twirling the collar ribbon of her blouse around her fingers (Design, Luke Ede) lowering her head and glancing up beguilingly with her eyes, but was undermined by her vocal work that was accumulatively distracting in its poor execution.

George Bernard Shaw’s PYGMALION came to mind as I watched THE KISS. Some engagement and arrangement with a “Henry Higgins” might have been useful to enhance the success of THE KISS, for as it stood, it was an oral and aural disappointment. The entertainment value thus, undermined, enormously. As I recently heard Orson Welles, on a You Tube interview quoting Stanislavsky, “la voix, la voix, toujours la voix.”
Posted by Editor at 9:45 PM

Kevin, your usual keen analysis of the technical reasons why you thought the production did not succeed. My friend and I just thought it was all a little overwrought, jumbled and confused. Sometimes these dramatic concepts (all based on the Kiss concept) can sound better on paper than in execution. I did not have the benefit of any program notes, but often these are only hi-falutin' conceptualising about what the high-minded director aimed to achieve. The sources were diverse, the common "link" not at all perceptible and as a result we both thought the whole thing was a bit of a mish mash. It is disappointing that to my mind that, now that Downstairs has all come "in house", the quality of the productions seems to have suffered somehow. Not sure that that is a discrete reason, but last year with different outside companies almost everything was much more enjoyable than this. Disappointing is the one word summary from me!