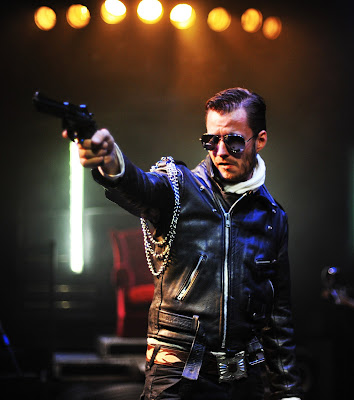 Arts Radar in association with atyp Under the Wharf present TOOTH OF CRIME by Sam Shepard at atyp Theatre, Pier 4, Hickson Road, Sydney.

TOOTH OF CRIME at atyp is the third Sam Shepard play we have seen in Sydney in the last year. FOOL FOR LOVE, Downstairs Belvoir and TRUE WEST for the Sydney Theatre Company being the other two.

Sam Shepard: "First off let me tell you that I don't want to be a playwright, I want to be a rock and roll star. I want that understood right off. I got into writing plays because I had nothing else to do. So I started writing to keep from going off the deep end." [1].

Sam Shepard has written around fifty plays. He has won numerous Obies, including one for THE TOOTH OF CRIME, a Pulitzer Prize for the original BURIED CHILD (1979), and the New York Drama Critics' Circle Award for Best Play for A LIE OF THE MIND (1985).

Shepard came to the theatre through a series of fortunate connections.His early one act plays first produced at the then new Off-Off-Broadway venues: the Genesis, La Ma Ma, Playwrights Unit, and Caffe Cino, and attracted the attention of the British critic Kenneth Tynan, when he was putting together his risque revue OH, CALCUTTA (1969). THE ROCK GARDEN (1969) was included as the final scene. The success of the surreal texts of plays like ICARUS'S MOTHER (1965), RED CROSS (1966), THE UNSEEN HAND (1969), and culminating in COWBOY MOUTH (1971), which he wrote with Patti Smith, led him to travel to England to live, to pursue a career as a rock star.

For Shepard was simply following the aspirational dream of young American's growing up in the 1960's. "Rock 'n' Roll was the heartbeat of American youth in the 1960's, and Sam Shepard felt the pulse." [1]. "Seven of his last nine plays had included a rock band on stage in some form ... Shepard himself played drums and occasionally guitar with many of those bands. He was an accomplished percussionist and had recorded two albums with the folk-rock band the HOLY MODAL ROUNDERS. He had also been commissioned to write a screenplay for the Rolling Stones." [2].

Shepard reserved the highest honour for rock-and roll "in the pantheon of pop culture mythology ... Shepard's work in the late 1960's and early 70's demonstrates a search, on his part, for a genealogy of American myth and, particularly, an archetypal character who was both outlaw and messiah, and who spoke to a contemporary youth audience. ... That search culminated with what is broadly considered Shepard's pop mythic masterwork, THE TOOTH OF CRIME, and with the modern-day tragic hero of that play, Hoss." It premièred in London in 1971. "Hoss is part gangster, part racecar driver, and a rock star through and through. His mysterious profession, known only as 'the game,' is populated with 'hit men, astrologers, disc jockeys, souped-up cars and rock and roll music.'" [2].

THE TOOTH OF CRIME in a production by Richard Schechner by the Performance Group in 1973 had the critics warm to it, to the epic feel of the conflict between the outlaw rocker Hoss and the empty stylist, Crow, "seeing this as a serious play, despite its humour, the New York Times reviewer, Clive Barnes, called it 'splendidly provocative' and felt its 'mythic subject' held tantalizing implications among the play's 'depths and layers'" [3].

A rock star of declining influence, Hoss, broods in anguish and greets the arrival of the new, Crow. A challenge for supremacy, both verbal and sung, is engaged in. One shoots himself in defeat, one clambers to the throne to preside.

The last time I saw this play was way back in the first years of the Nimrod St Theatre at the Stables with, among others, Reg Livermore. I remember being puzzled and disappointed by it then and this new production by David Harmon does not dispel that puzzlement or disappointment. Mr Harmon claims that "TOOTH OF CRIME is a gift piece for any director to be given the opportunity to grapple with and it's been high on my wish list for years." Be careful for what you wish for. This production is not very clear in its story telling and defeats the audience from engaging with the writing of Shepard. It is a failure.

The design by Adrienn Lord, both costumes and set , are very attractive indeed. Accompanied by a beautiful and sympathetic lighting design by Richard Whitehouse, the setting promise much. Unfortunately, in action this installation art-like set of a fenced off garden of large rocks, bridged in the first act by a thrust of a wooden pier path and in the second act by a marooned island-square of wooden timber, becomes a physical and ultimately aural obstacle in serving the actors to easily negotiate to tell the story. A high backed, red throne like chair, stepped by a heap of rubber car tyres at the back of the floor space, gives a breath taking height scale and makes good usage of this theatre space, but little assistance to the clarity of the spoken text. The costumes are also spectacularly fanciful and image-driven but ultimately, especially, for example, in the case of Crow, the antagonist in the action of the play, a further physical obstacle.

It is here the problems begin, where design concept/look is all, and practicality secondary.

The leading character of Hoss, the declining rock star, the neurotic desperate narcissist is impersonated by a wonderfully gifted actor, Akos Armont, who unfortunately treads a line between "genius" and gross indulgency in his playing. Indulgence triumphs and obfuscates his grand concept of the character. The lack of judgement around the acting 'tics' of his characterisation, the excessive breaking up of the "poetry" of the Shepard text and the inaudibility around the songs makes for a dis-engaging experience that is cumulatively wearing and wearying.

This lack of control must also be laid at the feet of the director who in his program notes recognises that there is "something thrilling about the writing of Sam Shepard. There's a musicality to the rhythms, an electricity that hums between the lines." So, the fact that the audience cannot hear the text clearly or experience the hum between the lines, because of the unyielding, distracting quirks of Mr Armont is partly his failure to direct, accurately, the actor's out-pourings for the desired textual sympathy.

The battle between Hoss and the new revolutionary music figure, Crow, that is promised in a cliff hanger hesitancy before the interval is a fizzer, as the actor Steve Toulmin has none of the skills or charisma that are needed to create the exciting frisson of challenge and warfare between the two rock stars. Mr Toulmin's vocal skills with spoken text lack conviction and the lyrics in the songs are muffled and lost. A physical uncomfortableness is also evident and the power of the rising new force, in the play, is not palpable.There is no conflict, no drama.

Paige Gardiner as the female figure of support, Becky, and the ultimate property of the court ruler, lacks projection and real power in this space to have the impact necessary. The more impressive work comes from Daniel O'Leary as Cheyenne, he delivers his song beautifully, and quietly creates a character of contrast to the fulminations of Hoss. Also impressive, in small but effective roles, was Martelle Hammer as the sooth-sayer, Meera, and Matthew Hardie as the deejay, Ruido Ran.

All of the actors play instruments and percussion (Ms Gardiner, impressive with a trombone amongst other skills). The Composer and Sound Designer, Basil Hogios, has not yet found the balance necessary for the lyrics to be heard, or is it the problem of the space itself?

This work by Sam Shepard is notoriously hard to "pull off". That this company has had a go is admirable but it needs much more skill and discipline to rope this monster than we have here at atyp - at least at the performance I attended. Plays about revolution, challenging the status quo, perennially attract the young artist, the complexity of the vision of the writers are often overlooked in the excitement of the possibility.

In 1996 a revised version of the play was made by Sam Shepard: THE TOOTH OF CRIME (SECOND DANCE) for the SIGNATURE THEATRE COMPANY.