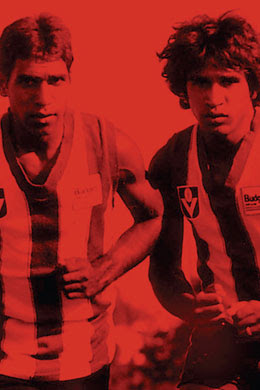 Reg Cribb has fondly adapted and collaborated with Sean Gorman and the Krakouer families to construct a straight forward narrative playwork celebrating the football skills and tempestuous lives of two ground-breaking indigenous sportsman, figures, in the Australian history landscape.

Marcelle Schmitz, the director, has efficiently employed the actors with an ease of storytelling techniques that are fluid and always fresh and comprehensible, despite the multi-role play in that the three actors are required to take on. Indeed is the comfortability and charm of the actors that keep this play alive and present. Without the directorial and actorly skill, this play could be very, very, dull and ordinary, indeed, unless you were a football, that is AFL, fanatic.

Most of the audience I saw it with were just that. It was a very exciting experience to sit among such fans in a theatre and see and hear the relish of every detail that was brought to the stage. The video clips of the Krakouer brothers at inspirational work were especially rousing and that crossover of sport as art had real resonances. The poetry of the boys/men in motion, awe inspiring, dance–like, balletic (Disco hips!!!).

Sean Dow, and the clever and generous actor, Luke Hewitt and Leon Burchill are lovingly committed to the tasks. It was a pleasure to watch the interplay and interdependence, trust, up there on stage between these men.

This play by Reg Crib has good intentions and they are honoured indeed. In terms of the, relatively, ground breaking work of the recent BULLY BEEF STEW at Pact Theatre earlier this month, it is curiously dated in construction and relevance. Not unimportant in its social issues but old fashioned and not nearly hard hitting enough. History recorded, but explorative dramatisations of cause and effect, simply avoided. It is a fan’s love letter without any deep digging . An avoidance of confrontations.

You can’t have everything, I guess.
Posted by Editor at 10:13 PM