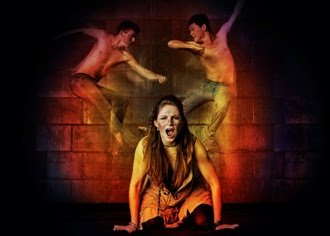 Australian Theatre for Young People presents "cursed hearts" inspired by ROMEO AND JULIET of Shakespeare, Gounod and Prokofiev at the atyp theatre space at the Wharf.

Danielle O'Keefe, the director, has attempted to investigate with a young troupe of 21 actors, the thematics of Shakespeare's ROMEO AND JULIET, specifically, the forbidden love between warring parties, families. Of the 15 women and 6 men, from my reading of the ensemble biographies in the program, most appear to be still at school.

"The aim was to tell the well-known story of ROMEO and JULIET in a new way through the layering of traditional performance techniques with contemporary performance techniques, including digital media and sound. We have used our chorus as abstract representations of emotions such as fear and threat, as well as characters in the story, through the use of their voices and bodies throughout the space" (choreographer, Belinda Scanlan). All extremely modish and brave in its intended ambitions but ultimately the production lacks the ability to communicate the basic story past the trappings of production, and so fails.

This is a promenade production and we enter a constructed design space (Marc Barold) that occupies, mostly the perimeter of the found space, taking advantage of some of the permanent architectural features of the wharf site. Other acting spaces are defined by the lighting (Ben Cisterne), for instance, an intense white ribbon of light in the centre of the area, which evolves into a busy zone of encounter for the performers.On two of the walls, around the space, an animation of digital visual designs (Trevor Wills) of some thoughtful and beautiful images are projected.

As we promenade in and stand waiting for the production to begin, the young company in black, goth-like attire (Adrienn Lord) insinuate their presence in collections around us, between us, and from heights above us. The movement/ choreography (Belinda Scanlon) is the result of experimenting with an idea called "flocking" within the space and shapes and levels of the environment. Having an audience that is promenading in and among the performers, adds to a sense of improvised engagement. An aliveness. The adrenalin, hormonal energy of the young people is palpable through most of our senses: touch-heat, and smell. It also, unfortunately, leads to visual obfuscation and one misses a great deal of the training of these performers.

Dominating the experience is a sound design and, I assume, composition (Tom Brennan and Zacchary Wiffen) that is a loud, pumping, penetrating and relentless disco noise that has, fleetingly, some musical thematics from the Prokofiev Ballet and, maybe, the Gounod Opera of ROMEO AND JULIET. Mixed with this are what seems to be recordings of some of the actors quoting some of the Shakespeare play (poorly) and some live spoken text, and, even further aural layering, with the live open vowel musical singing/moaning/howling of some of the actors. Intense, indeed. This space is not entirely sympathetic to electronic sound (refer to my THE TOOTH OF CRIME post), and the experiential journey can often be wincingly painful to the ears.

The listed "creatives" seem to have had a fine time building an atmospheric support for these performers but they mostly swamp and drown the work of the actors. Shakespeare is often reduced to a single word e.g. "sacrifice”, “banished”, “dead”, repeated over and over again, and with escalating desperation by the performers, resulting in shouting, and essentially, to my ears, dangerous misuse of the instrument. The young actor playing Romeo, for instance, demonstrated, terribly early in the performance, a raspy and scratchy voice, despite the fact that he was 'wired' for sound, as well. A tired and possibly injured quality. That he has several weeks scheduled for performance still to fulfil, raised my concerned empathy.

If the amplifiers of the sound equipment were overloaded and started "acting up'', if the projectors burnt out, if the lighting fused and 'blew'up', I have no doubt that the creative team would have replaced and then have taken advisory care with the new equipment. Why then have these young actors not being cared for, when their voices began to strain? These young artists with huge emotive enthusiasm seem to not have had proper guidance to instrument usage and care. Surely this should be part of the responsibility of the director and the artistic team of atyp? (Fraser Corfield). Duty of care with the instrument development of these young ambitious artists needs to be balanced with the modish ambition of the production. Without instrument health the future of these young artists could be severely impaired.

Anyone not knowing the Romeo and Juliet story will have very little comprehension as to what is going on in this production, I suspect. This production will probably be best appreciated by the family and friends of these young ambitious young artists. No one else much. An ironic sound quote that I did hear clearly at the end of the very long sixty odd minutes of this work was directly from poor 'lost' Shakespeare :

"Go hence, to have more talk of these sad things;
For never was a story of more woe
Than this of Juliet and her Romeo."

I left this production with concern for the actors and their instruments rather than an insight into the Romeo and Juliet phenomenon.
Posted by Editor at 11:26 PM