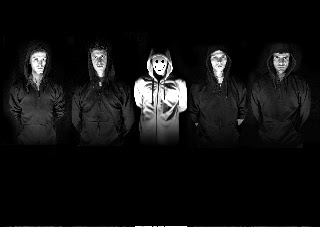 This new Australian work, a short one act play by Joanna Erskine, takes its inspiration, from the novella of Yuri Tynyanov, about the invented Lieutenant KIJE, made famous by the Prokofiev chamber music suite (another Russian influence to the Sydney theatre menu, this year!).

In a contemporary setting Konrad (Fayassal Bazzi), Irving (Tj Power), Jono (Gabriel Fancourt) and Ed (Wade Briggs) four young 'soldiers' as a result of boredom create graffiti on a wall: "K.I. j.E.", which under disciplinary threat from Messner (Christopher Tomkinson) they explain as the work of an imaginary soldier called Kije. Once invented they are forced to sustain his existence and explain to the authorities his invisibility. Ultimately, they must kill him, for his deeds have become too heinous for them to bear.

The play is made up of short, sharp scenes, mini-episodes of narrative, beginning with the foreplay of bored boy/soldiers contrasted their robotic/obedient soldierly roles of army discipline,in the presence of authority, until they come across a young woman, collateral damage, maybe, on the fringes of an active war zone. Their behaviour tips into the unpardonable.

The Director, Sarah Giles along with the designer Charlotte Lane have created a white blurred mosaic-like space, walls and floor, accompanied by shocks of white light, between scenes, and a faintly red haze to accompany distant explosion effects of war (Lighting: Verity Hampson, Sound: Caitlin Porter).

What this production lacks, to give the writing a more potent impact is a truer reality from the actors. The four young soldiers, unfortunately dressed as if they university army cadets on a camping holiday, without any sign of a possible war zone, with no hardware besides a back pack, armed with a paint spray can and torch, no head gear even, behave like actors well rehearsed in bantering warm-up theatre games, that have no truth of spontaneity or real gravity of the character's situation. We imaginatively stay pretty much in the reality of the Old Fitzroy stage with actors - no real imaginative grit of soldiers in a war zone.

I kind of indulged the acting of the men and suspended my disbelief until late in the play when the victim, “Girl”, played by Michele Durman, entered. I was forced to judge the relative ineptness of the other actors because of her stunning offers. Ms Durman with no text at all, brought a veracity of tragic and desperate truth to her character's dilemma. Her sense of fear, bewilderment and helplessness in the presence of these men created a world of frightful reality. One winced with the trauma that Girl was going to have to endure - possibly her murder. Ms Durman's imagined vividness caused, affected, perforce the other actors to begin to play at a level of committed imagined truth that up to then they had lacked. The contrast of the acting imaginative force between Ms Durman's contribution and the shallow and under investigated reality of the men was obvious and resultantly, palpable.

What the actors had needed to bring onto this stage was the world of the film JARHEAD (Sam Mendes) and THE HURT LOCKER (Kathryn Bigelow), a world of boredom, danger and lurking death. The smell and fear of violent death. They didn't. This production and possibly the writing was undermined.

It is interesting that I was bemoaning the lack of Australian play writing using the contemporary experience of war, whilst talking about THE WHITE GUARD. And here is an attempt at one. Interesting and encouraging. At this time I cannot completely discern the quality of the writing because of the failures of the production. I am wondering whether the quality of the writing would reveal itself more clearly with a better production, with a more authentic attempt to create the world of the play with the soldiers. This production fails to deliver that world until too late.

K.I.J. E. may have matched the potential of the plays I read in the collection of war one act plays: THE GREAT GAME: AFGHANISTAN.

Only time and opportunity will tell.
Posted by Editor at 11:22 AM