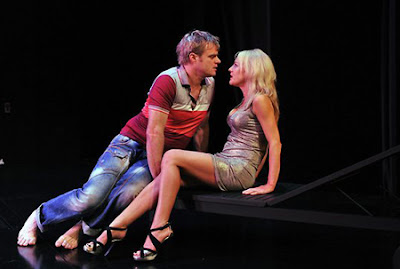 Dave (Damien Richardson), a karaoke bar owner has invited Kate (Sarah Sutherland), a hairdresser to a late night drink and fun at home - bar, swimming pool and home karaoke machine. But Kate is far more complicated than Dave expects. She has an agenda that will reach back into Dave's very complicated past. Part of it shared. Dave and Kate are survivors of a great natural disaster, and more, worse, Dave is also a survivor of a great man-made disaster as well - a double- whammy. Both reveal an agony of guilt that they have survived. The night unwinds in front of us.

Both actors give terrific performances. Mr Richardson, however delivers a great one. With a physical persona, reminding me of the great Walter Matthau, he takes us on a character journey from hoon boy, to behind that mask, to a man, suffering the pangs of an agonising sense of guilt, to a partly redeemed man through the catharsis of talking, who in this metamorphosis, offers, in his new evolving frail state, a hand to Kate, to grow into a new place of being. Of self acceptance. Of possible relief. An act of heroism that might assist both of them in their separate but connected griefs. Mr Richardson has a long 'aria' of, not just information narrative, but, of emotional narrative. He delivers it with vivid imaginative linguistic skills and emotional calibrating that is hypnotic in it's development. A real tour-de-force, some of the best acting I've seen this year.

Anne Browning has directed straightforwardly and, with Marg Horwell, has created a simple design solution for the action of the play. The lighting by Richard Vabre is a little too theatrical and over stressed in it's offers.

Last year Mr Wilding delivered a marvellously wicked satirical zombie-play, QUACK at the Griffin Theatre in Sydney, satirising the world about us. Here, he reveals a deft naturalistic hand and demonstrates a real storytellers skill. The play touches profoundly deeply on the audiences shared cultural memories and asks us to do what all good art should do- extend our boundaries of human compassion.

Worth catching - especially to watch Mr Richardson, who I only know from his television work in CITY HOMICIDE. I look forward to seeing him again.
Posted by Editor at 11:40 PM