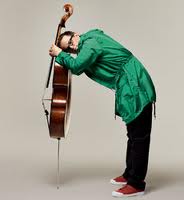 A true chamber music concert, then. Intimate grouping of players and attuned sensibilities of a period soiree, between the players and the audience.

This concert was a sensitive and delicately refined execution of music by Bach, Stravinsky, Webern and Schubert.

The first half of the concert was an intriguing presentation of excerpts from Bach"s THE MUSICAL OFFERING, BWV1079 (Composed 1747); Stravinsky's CONCERTINO for string quartet (1920), THREE PIECES FOR STRING QUARTET (1914), DOUBLE CANNON "RAOUL DUFY IN MEMORIAM"(1959) and Webern's TWO PEICES FOR CELLO AND PIANO (1889) - arranged for cello and string quartet by Graham Ross.

The program notes are pleasantly dense with the details of the creation of the Bach work, the intellectual, musical, mathematical 'game play' of Bach in the composition of the The Musical Offering using a musical theme that Frederick the Great of Prussia (1712-1786) had given him. The 'cheeky' solution by Bach has provided a fascination for musicians since their first appearance.

What the Australian Chamber Orchestra has, then, done, for this concert, is to provide an added puzzle of intellectual musical appreciation by interleaving all these works inside each other, so that we have a mixed order: Stravinsky, Bach, Stravinsky, Bach, Webern, Webern (reversed order of the Two pieces for cello), Bach, Stravinsky and so on, further changing the order, for instance, the Stravinsky Three Pieces for String Quartet in a shuffled presentation of:  III-Canticle; I-Dance;II-Eccentric. The reasoning for this 'game' by the ACO, maybe, for the connoisseurs best to enjoy, but for myself it was the source of intrigue and delight-an education in action.

The ensemble musical playing between these five artists, their visible interplay and sense of joyful explication of each of their parts in this concert, was communicated in an all absorbing manner. Their focus forced me to concentrate more minutely in what I was hearing. That I was seated close to the orchestra was a bonus to my aural transportation.

Following, after the interval, the ACO quintet presented the Schubert String Quintet in C Major D.956. (1828). Again the concentrated musicianship of these artists and the ensemble delicacy and generosity was brilliantly evident. The delicacy of violin pianissimo, the thrill of team statements and harmonious wills in the playing was engrossing. The second movement of the Schubert, the ADAGIO, was super-humanely given (Was I on earth?).

A great concert. Much appreciated by myself and the audience. A night of music that approached the concert hall audience as thinking adults, challenging us  to listen anew to works that one may know, so that we were been not just given a passive night of easy listening but the added bonus of puzzle delight and solving as to the mysteries of the artistic insights and 'game play' of this Australian Orchestra and its artists in their sophisticated choices.