And No More Shall We Part 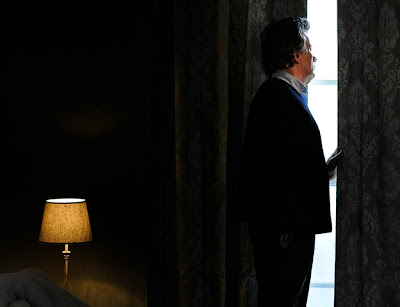 Griffin Theatre Company presents AND NO MORE SHALL WE PART by Tom Holloway at the SBW Stables Theatre, Sydney.

Contemporary issues of importance, Climate Change, the continuing Global Financial Crisis (frighteningly imminent today), the famines and degradation of Africa, South America, the South Pacific, the Indigenous crisis in Australia,the culpable history of Australian settlement or invasion, the tragic warring nature of our species, the welfare of our neighbourhood relations, the plight of our elderly, the abortion and the euthanasia dilemma, the ruthlessness of corporations and their C.E.O.'s pursuing output and K.P.I.'s and profit at the expense of quality, transparency and truth, the rights of ethics and religious instruction in our children's classroom... please feel free to continue with the list ... are left to a few to fret about.

Rather let us concern ourselves with the latest celebrity weight loss, marriage, divorce, bad behaviour or self inflicted abuse or death. Let us stir angrily over the 'pokie' tax, the hotels Associations demand for the removal of the "violent hotel" name and shame list, Ms Keneally's hair style, the price of bananas. Let us fume about the latest football, tennis, cricket, scandal. MASTERCHEF. THE RENOVATORS. GRAND DESIGNS. IS THERE LIFE ON MARS?

Do you dare to know? Immanuel Kant the great German philosopher, taught that "people should acquit themselves of their duty to state and station… (And) it was the task, he considered, of mature people not to succumb to laziness or cowardice but to "dare to know.'" [1]. Mr Holloway's play, AND NO MORE SHALL WE PART, invites you to dare to know. To know something of the debate about euthanasia and the consequence of our own tepid inertia to engage with it.

Tom Holloway in this relatively new Australian play (2009), becomes one of the brave few that frets about a contemporary issue of importance: the right to choose the manner and time in which we die. He enters boldly, and seemingly,very personally, into the euthanasia debate. Sam Strong the Artistic Director and the Board at the Griffin Theatre Company have presented a very "unsexy" evening in the theatre. The subject matter is one that is very uncomfortable to confront and yet one which all of us will, possibly, have to concern ourselves with. Whether one wants to go to the theatre to deal with this subject, is a very risky enterprise that the Griffin have undertaken. All power to them. And I do encourage you, along with this company, to go - you will be rewarded in more ways than you can estimate.

AND NO MORE SHALL WE PART is difficult, is confronting but compassionately empathetic about a contemporary issue that is humanised in a very true experience that we can witness through the second hand journey of a play. We don't have to suffer the pain first hand, either emotional, physical or moral, we can watch at a distance, others, go through it and within 90 minutes get up and go downstairs for a drink, a chat and then a walk into the night.

What I can guarantee is that that walk into the night will be a significantly different one, to the last time you attended the theatre, and walked away into the dark, as the emotional taunts of Pam and Don will be part of your DNA forever, especially as you realistically engage with your life and the life of your friends and family, anew. Our common fellow journeyman, TIME, will bring you to this situation inevitably, and you will be thankful that you did go to the Griffin Theatre to see this play, for it will help, one way or another, you, to conduct informed decisions around the way to help yourself or others to exit into the state of death. For there is no such thing, except in superstition, as a Deathless Man or Woman.

That euthanasia is now happening around us in cloaked, shamed and in  criminal dimensions is only one of the things that this play asks you to contemplate. It is by experienced drama of this kind that we, members of society, can enter a debate for change and reason and compassion. Issues of unpleasant deliberations can be aired and absorbed.

Here, on the very intimate SBW Stables stage an ordinary and loving husband and wife of a long marriage, where that love has been tested with long hard work and found still pulsing, is put to a test that is most demanding. The biggest kind of testing imaginable. We see the history of the decision, we see the emotional toll of that decision and we watch the decision happen in front of us. And no more shall they part.

Linda Cropper as Pam, and Russell Kiefel as Don are stunning in the absorption of these characters and their demanding journey. And if you as an audience believe that acting is easy then look closely at these two magnificent artists at the curtain call and see what it has cost them to bring this story to you. That, they will do it seven or eight times a week, for five or six weeks is a commitment of some courage, and demands salutary admiration. It is not only the plumbing and pillaging of their emotional resources that is demanding, but the horrible technical requirements of Mr Holloway's writing , too, is Olympian. It certainly demands your attention and presence. This is good acting. Ms Cropper is particularly electrifying and every twitch of her fingers, bend of her wrist, every subtle ripple of emotion across her astonishing face, underlines the calm pragmatism of her vocal delivery. The tension between what we see and what we hear from Pam is an abyss of great emotional acting. Fathomless.

There are problems with the text. There is in the writing not enough variety for the actors to play with in the early scenes. It is a tremendous relief when two thirds into the playing time, Scene Four, a violent and intense argument erupts over marmalade. Pitch variation, volume and emotions ricochet around the theatre as the characters chase each other, child-like through the imagined geography of the house. The first three scenes had stayed too similarly paced, within a narrow range of expression, too familiar for a discomforted audience to be patient or immersed with .Often, one was suspended, becalmed in the experience of watching stagnant moments of action, for neither the narrative, emotional or character journey was moved forward consistently with the dialogue. In fact, Don became a bit of an unsympathetic 'whiner' and the couple stalemated in the events.. On the other hand the writing and the sensitive directing by Sam Strong in the final dinner scene is finely judged and immensely moving.

There was, for me, as well, some oddness about the over naturalistic design solutions that Victoria Lamb and Mr Strong had come to, not withstanding the gauze wall. The naturalism was not sustained : Where was the stove and sink or at least the jug to boil the water for the tea to be made? Do you really believe that the Pam, that Ms Cropper was immersed in, would have the vulgar taste of the ugly tissue box, on the side board with the family photographs, that one saw as one entered the theatre space? Carpings, for sure, but in the depths of such emotional confronting subject matter, one looks for ways to escape the confrontation, and any perceived flaw of consistently permits it. One can dwell on something else rather than the reality of what is happening in front of one.

The sound from Kelly Ryall was also oddly static from scene change to scene change - it created the same atmosphere each time and did not seem to have accumulated any significant development to support the story as it moved forward. It sounded too much like the same cue.It did not add to the experience, it simply sentimentalised in a summary kind of way, repetitively. Odd for this usually impressive story teller.

Verity Hampson, with her lighting design, once again, creates the right tone of atmosphere - fearfully talented.

This is a very brave production. There is some very, very good acting. And the writing though, sometimes technically flawed,  embraces such an important contemporary issue that all of you who love the theatre and dare to know, so that you can claim to be a responsible citizen of your society, however modest that claim may be made, should ensure that you go. Worth it, I reckon.

Do go. The Griffin organisation deserve your patronage.

I just saw it tonight and was glad to be there for the forum on assisted suicide after which Gideon (Cordover for those reading this that don't know him) spoke at. His father would have been very proud.

I too say 'Bravo' for such a play that asks us to confront this issue head on and not through one-sided views in a newspaper or meaningless, uninformed words from the people who apparently 'govern' us.

As a new actor to the industry, I sat there, in the dark, soaking up the two performances, watching them like a hawk and learning as much as I could from them. I totally agree Kevin, at the curtain call, one could clearly see how much of themselves they had given to tell another's story. Inspiring.

As a human being, I sat there, in the dark, mind racing, tears forming, and on occasion, teeth grinding, that this issue, along with others (gay marriage for instance) are still taboo subjects. Why?