As I Crossed the Bridge of Dreams 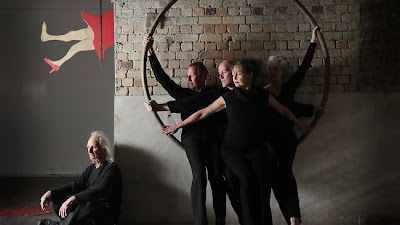 Ken Unsworth a famous Australian sculptor has collaborated with AUSTRALIAN DANCE ARTISTS: Susan Barling, Anca Frankenhaeuser, Patrick Harding-Irmer, Ross Philip and Norman Hall on a personal two performances only, gift, to some invited Sydney audience of AS I CROSSED THE BRIDGE OF DREAMS on Cockatoo Island, Sydney Harbour.

The audience I saw this work with, met at Circular Quay, in front of the MCA, and were ferried to Cockatoo Island on a still, fresh winter’s night. We disembarked onto the fore-shore, under the spectacularly lit cliffs of this sanctuary of ART, Cockatoo Island, rescued from the industrial landscape of yesteryear, and translated into awe inspiring spaces, art within themselves, and taken, with guides into one of the immense ‘caverns’ to temporary seating blocks.

Part 1. THE GARDEN BETWEEN HEAVEN AND HELL was beautifully lit (Eddie Goodfellow) in warm yellows, highlighting the brick, sandstone coloured walls, the space itself, a remarkably majestic remnant ‘cathedral’- a now emptied industrial hall, had a floor, in vivid contrast to the walls, of gleaming silver, on which immense silver columns stood. Out of the perpendicular height of one of the columns, a puppet-figure rose, and in the tradition of some European theatre signalled with the striking of the box three times for the performance to commence.

Accompanied by a wonderfully contrived, haunting and contemporary sound-scape of dissonant noises and some music by Jonathan Cooper, the dancers emerged independently from the base of the columns and in pairs, and then as a quartet, explored movement based around gestural patterns. Anca Frankenhaeuser, in her usual striking presence and physical beauty partnered by Patrick Harding-Irmer, entranced us with the seemingly effortless movement dance signatures that had a spiritual conviction and power beyond the expression of the ‘animal’ manipulations. The arms and hands, the gesture of the head always extended imaginatively beyond the corporeal bodies. Susan Barling and Ross Philip, too, were engaging and convicted - creating dance with a different set of identity habits/patterns.

Later, plaster-cast heads/masks of the performers were secured to the dancers and the incredible increased height of these figures created an eerie, stilted apparition, intriguing, fascinating and still also, slightly surreal and spookily abhorrent. Seated on a bench the image of the weird quartet of figures using arm and hand movement becoming gradually more complex and intertwined, developed a hypnotic concentration that seemed to suspend time in this remarkable space.

After a catered wine and cheese interval, we returned to the space for Part 2. AS I CROSSED THE BRIDGE OF DREAMS. In this sequence the silver columns were hoisted and lowered and became part of the movement of the choreography with the dancers who sat, danced, slid, stood and crawled around and under their presence. In a large archway entrance at the back of the space a large face and a created swinging girlish figure had begun the proceedings. The odd beauty and combination of objects, including three large revolving silver discs, and the appearance of Mr Harding-Irmer labouring from the back arch entrance across the space with a gigantic bird aviary strapped to his back with fluttering live white doves (enchanting), danced action and clean block-like lighting, tantalisingly supported by a musical score by Jonathan Cooper using lyrics from William Blake, sung by soprano Nadia Piave, on a high heavenly height ladder-platform, to piano (Jonathan Cooper) and Cello accompaniment (Julian Thompson) captured a mood and presence of appreciated wonder. This work was just as interesting as the first, but did not quite have the magical impact of the earlier work. The piano was surmounted by a pissing angel and a sort of cute profanity of the juxtaposition of the bizarre and beautiful was achieved.

We were taken home to the Quay on the ferry, cutting through the harbour and under a starry sky, glided past the wealth and glory of Sydney foreshores under the bridge, and ushered by the glamour of the Utzern sculpture of the Sydney Opera House on one side and the Luna park face on the other to the wharf and back to familiar ground..

Mr Unsworth and his creative apostles gave to his guests an inspiring and generous art experience. Envisioned and embodied beautifully. Two performances only and then ephemerally moved into invisibility, though captured on film. How incredibly generous of this artist and how rewarding for his humbled guests.
It was truly good to be alive and a deeply interesting journey, held in our memories, which I would like to honour. Thanks.

what a beautifully worded review - totally inspiring i wish i had seen it !