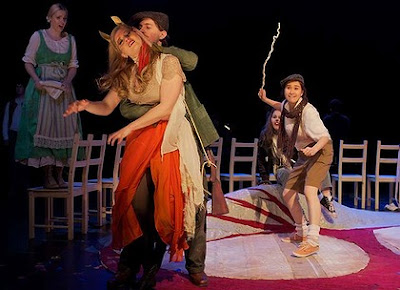 Earlier in the year, Sydney Chamber Opera work launched itself with the production of a new work, NOTES FROM UNDERGROUND, based on a short work by Dostoevsky. It was a remarkable debut.

Tackling Janacek's THE CUNNING LITTLE VIXEN is a brave choice as the work is relatively well known from its many outings in the Opera Australia repertoire. The work has a large cast, including a vitally important children's chorus.

Premiered the 6th November, 1924 at the National Theatre, Brno, this opera story has the world of animals presented living out the great cycle of nature. All animals from the human to the mosquito. "This disarming mixture of the human and animal characters is used not  for parody or comic effect but to underline the universality of freedom, love, death and renewal… The music itself is derived from the rhythms and inflections of the language - on which, along with the sounds of animals and birds, Janacek had been collecting since 1880 - and he did not imitate folk music so much as to absorb it into his musical vocabulary."

The orchestra under the guidance of Jack Symonds support the singers admirably and well. They did not seem to play with the excited passion and effort as in NOTES FROM UNDERGROUND but were still impressive. The score grows on one with gentle stealth and culminates with great and moving beauty in the final scenes.

The singers Julie Goodwin as Vixen (Mother and daughter!); Bryony Dwyer as Fox; and Alexander Knight as the Gamekeeper were impressive in their management of the work.

The production by Kate Gaul unfolds simply and unaffectedly on a very succinct design floor by Hannah Sandgren, who also designed the costumes. The hens and cockerel were particularly diverting. The open space of the stage area is carefully marshaled and focused with the large number of bodies on view. Entertaining and faintly disarming.

This production by this fledgling company does honour to the work but appears less impressive than the last. Comparisons are odious but are inevitable with such a specialised, famous and curious work. The muscularity of the company has been exercised with the scale and demands of the opera.