Fefu and Her Friends 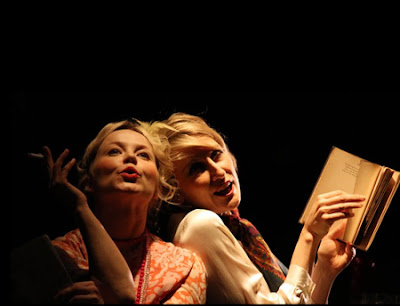 Maria Irene Fornes, a Cuban American writer based in New York, even in her own city, even in her own country, is a writer of 'boutique' fame, if you reference, say, David Mamet, who, comparably, may be a 'major department store'. She has however won 13 Obies and is in her eighties. She has been a pivotal figure in Hispanic-American and experimental theatre. She was part of the Off-off Broadway push of the sixties, seventies, eighties, alongside Shepard, Albee and the like. Her linguistically haunting, inventive plays are surreal and rarely plot driven, rather, they are 'the consequences of characters represented by their participation in frequently absurd scenes whose juxtapositions equal dramatic events. Ms Fornes a playwright and influential teacher: "Madame Avante-Garde"!

FEFU AND  HER FRIENDS written in 1977 has eight women who spend some time together, over several days, entertaining themselves in idle talk, exchanging gossip and views on life, their life and other's lives, care-free gallivanting, and amateur concerts, dances and lectures. Eating, drinking, drinking especially, lots and lots of coffee. The women are diverse in nature  but all bound together by their friendship and their 'sisterhood.' There is love in the air. The kind of love that only women can have for each other. It is kind of enviable.

I have observed that women writers do not need plot or outcomes, they can, and, delightfully find it enough, sometimes, to just talk and show. Stimulate and share. Funny, wise and puzzling. There does not have to be "winners or losers" or outcomes. And such is the blissful experience of this production of Ms Fornes' writing. It is an unbelievable easy pleasure to watch these eight women: Julie Billington, Harriett Dyer, Rebecca Johnston, Suzannah McDonald, Megan O'Connell, Emma Palmer, Sophia Roberts and Georgina Symes slip into such comfortable ease with each other and seemingly spontaneously improvise, tantalize and bemuse one. The water fight, sequence, a highlight among much, lightly delicate in its choreographics and girlish hysteria. Directed with a graceful hand and sensitive attention by Caroline Craig, the appetite to see more of Ms Fornes is burgeoned with a marvelous final moment of mystery and intrigue - of magic and surrealistic dreaming. Or, nightmare?

In a cool garden setting by Eliza Mclean and wistful lighting by Sara Swersky the atmospheres are heightened by the Sound design of Nate Edmondson.

I have once performed in ABINGDON SQUARE and have been slightly in love, I realise after this re-engaging with Ms Fornes, for years. I recommend that for a treasure of joyful space, that can suspend you for eighty minutes above and beyond the travails of our present tortured world and surrounds,that you beat a brisky beat to this theatre to catch these excited and passionate women artists stretching into a flight of unadulterated pleasure and joyful fun. Modest, small scale, but still worth it.