The Haunting of Daniel Gartell 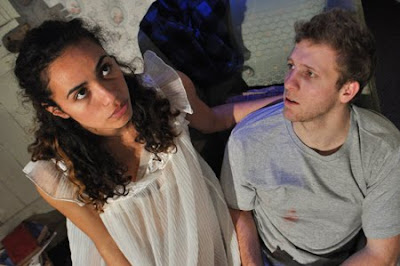 Bardic Productions in association with the Tamarama Rock Surfers presents THE HAUNTING OF DANIEL GARTRELL at the Old Fitzroy Theatre.

A young actor, Craig Castevich (Joshua Morton) is researching the background to a famous Australian poet, Daniel Gartrell (Mark Sheridan) in preparation for a documentary film shoot. Craig scores the opportunity to meet the man himself and goes to his run down, neglected home to find an irascible eccentric who proceeds to taunt him with a series of interviews that lead to darker and darker revelations. The old poet's daughter (Elizabeth Tuilekutu) also makes her presence felt and adds some 'spice' to the proceedings.

This is a 'classic' Australian Gothic ghost story, which begins with suitably atmospheric sounds and haunting stormy winds (Composer,Brent Rowley) with a design by the director (Jacqueline Cosgrove) of a decrepit, rotting sitting room dimly lit throughout most of the proceeding. Mixed with a mystery of a dead brother and aboriginal sacred lands of Mount Ragged this 'haunting' by the young actor of this poet's life ends up in a 'possession' and spiritual transfer of uncomfortable dimensions that reminds one of an episode of the old television show THE TWILIGHT ZONE.

Reg Crib a West Australian writer has had a very prodigious and rewarded career as a writer. In Sydney we have seen THE RETURN (2000), subsequently filmed as LAST TRAIN TO FREO; and LAST CAB TO DARWIN (2004) and GULPILIL (co-wrote (2004). Mr Crib in an article by Katrina Lobley in the Sydney Morning Herald (Friday 5th August) tells us the writng of this play was a kind of 'purging experience" and one suspects it is of his own actor training that is getting a go-over here.

This is a well written yarn. It does sound and feel a bit like a radio play that one might catch on ABC Radio one Saturday afternoon.And certainly the writing is better than the acting. Notwithstanding the Royal Shakespeare Company credentials of Mr Sheridan, when one reads that John Wood recently played the role in Melbourne, one gets a  sense of the rough house larrikin personality that is absent from Mr Sheridan's performance that might bring the piece truly to life at the Old Fitzroy. Mr Morton and Ms Tuilekutu are both young actors who are attractive to watch but are rather tepid with their choices and as yet do not have the confidence to take this 'shaggy dog story' by the scruff of the neck and have some fun with it. A little too earnest, tentative.

This production passed the time and despite some lackings in the acting department the story has enough suspense and mystery to enjoy, particularly if you are a fan of this genre.
Posted by Editor at 9:01 AM

Kevin, I would have to agree with you that this performance was rather 'tepid' from my perspective. Earnest the actors might have been as you say but I was not really engaged by them, or at least the two main male actors. I could just not get past the barrier that I thought I was watching/listening to 2 guys reading the script. It wasn't really bad or anything, just not very real from my perspective. I did not feel that these were two real individuals at all. However by contrast I found Ms Tuilekutu much more vital and alive - she was a real person by contrast and suitably projected a certain feeling of vivacity and playfullness. This was a character with real personality compared to the other two who seemed rather colourless to me, although the Gartrell character could have been really interesting. As you say, John Wood, as in Melbourne, would have been a different proposition altogether I am sure. Not one of the greatest at the Fitzroy I am afraid (glad it was a cheap Tuesday then!).

Kevin, further to my earlier, I would agree with you that it does remind you of a Sunday afternoon radioplay. I also belatedly realised in looking at the program after the event that the colour pic thereon represents the younger actor "becoming" Mr Gartrell to the extent of nursing a glass of brandy, not to mention wearing a tutu of black cockatoo feathers, with one posed on his shoulder. Spooky Twilight Zone indeed!