A Quiet Night in Rangoon 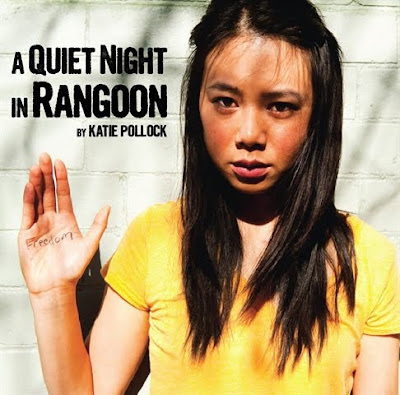 subtlenunance in association with The Spare Room presents the world premiere of A QUIET NIGHT IN RANGOON by Katie Pollock at the New Theatre, Newtown,Sydney.

A QUIET NIGHT IN RANGOON by Katie Pollock is a new Australian play of some note and heralds for me a playwright I want to see more from, to look forward to more output. The talent scouts of the Sydney Theatre Company, Belvoir St. and the Griffin ought to see this play and jump with enthusiasm at this interesting emerging talent and this play.

An Australian play with an Australian female character at its centre set in a foreign country in a vitally volatile era of grave political and social consequences. An Australian playwright examining the world that is larger than the bedroom or local neighbourhood - arresting and interesting and of recent times, almost unique.

"RANGOON, Burma, 2007: The Movement for Democracy has suffered years of brutal oppression. Its revered leader, the Nobel Peace Prize Laureate, Aung San Suu Kyi, is under arrest, but the Saffron Revolution is about to shake the military dictatorship to its very core."

Piper (Kathryn Schuback) is an Australian journalist, 'browsing' an exotic oriental culture and attempting to write a fluffy, travel article, to subsidise her travel costs, when she finds herself gradually embroiled into the thick of real political events, about her. The reality and the moral conundrums of her immersive situation are at the core of this complex, but lucid, play. Written with a heightened sense of reality and fascinating poetical gestures (a character called THE LAKE that speaks to us) and daring characterisations (a computer with a will and comic personality of its own!) the form of the piece is totally transgressive and thrilling, especially at a time when so much naturalism has appeared on our Australian "playing fields." (N.B. Not that that is not interesting, just a bit repetitively boring).

Ms Pollock is not only well informed, intelligent and passionate about the historical/political setting of her play and principal character, she is also immersed in the spiritual undertow of this Buddhist world of Rangoon, and she has a witty and theatrical daring. Her control of her material and the explorations in the dramatic form of her storytelling modes is immensely impressive. Surprising, amusing and stimulating. This play began its life in 2007, and has, from the list of people who have advised on its formation, had development. It shows.

subtlenuance under the guidance of Director, Paul Gilchrist, have had the courage and the energy to present this play in partnership with the New Theatre's The Spare Room project. It has taken courage, for the majority of the acting company requires an Asian cohort of actors. This they have found and, though, each acquit themselves, adequately, they do not have the consistent, requisite skills, as yet, to create an ensemble of clear and supportive storytelling. They lack the craft energies to sustain the necessary bravura to keep the audience fully involved. The acting is the ingredient that deflates the experience of the performance, dedicated though they are. Exciting though their potential demonstrates.

Mr Gilchrist needs to spend more time coaxing and shaping , encouraging his actors to fully illuminate and capture the potential of Ms Pollock's play as an ensemble. It is too disparate and "I"-centred. Although the acting may distract your attention to the experience to see and hear this play and to become agitated by its potential, it is ultimately worth the effort. The production team have supported the play within limited means but it is interesting enough to support Ms Pollock's vision.

James Waites has begun a discussion on acting on his blog. I believe the theatre is a collaborative effort, no one ingredient in the exercise is more important than the other - but at the core of it all is the writer - I have always believed the writer is "GOD" and that it is the task of all the other team members to bring it to life as honestly and as skilfully as they can. The writer, the play, is the originating source of the inspiration to play for the audience. If we have a good text 90% of the work can be solved.

David Mamet cautions his actors that all they need to do is simply say and do what he has written. This is basically always true. This is a difficult task to achieve and it requires meticulous "close reading" and have actors that are prepared to shape shift to what the writer requires and not to reduce the writing to their own selves and skill limitations.The better the writing, however, the surer the possibility of success. No matter how great the actor, one can not make, shall we say, a silk purse out of a pig's ear - although I have seen some great Australians talents create an illusion of silk with many a bad play.

A QUIET NIGHT IN RANGOON is a good play text that despite the inexperience of its actors and the director, still shines through. With a more experienced cast this play might well be the cause for more quiet excitement in the Zeitgeist.

I believe it is worth paying attention too. Congratulations to the two associated producing teams for the prescience and commitment to this work.
Posted by Editor at 7:58 AM