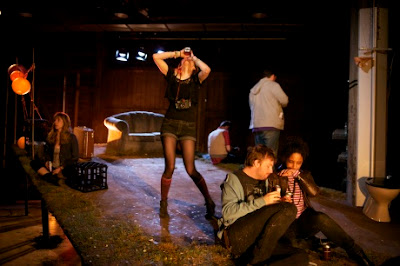 Mess Hall in association with atyp Under the Wharf present the world premiere SWEET BIRD ANDSOFORTH by Laura Naumann, translated by Benjamin Winspear.

Multi talented Benjamin Winspear (Actor, Director) initially developed SWEET BIRD ANDSOFORTH at 2009 World Interplay.(World Interplay is the largest festival of young playwrights in the world. It is held, according to the Internet, for two weeks every two years in Townsville, Queensland). In 2010, Mr Winspear, subsequently laboured, apparently, over a translation of this play into English from the German.

Laura Scrivano, the Director, led the cast through a creative development at Queen St. Studios, as part of their arts residency program. Six actors, Fleur Beaupert, Geraldine Hakewill, Alex Millwood, Sonny Vrebac, Michael Cutrupi and Fiona Pepper, all relatively recent graduates from very reputable drama schools. All of them have had extensive training.

How is it, then, that not one of these actors, perhaps Mr Cutrupi is an exception, seem to have any care for words, and I mean the simple formulation of the sound of vowels and consonants to shape the word? Or the combination of the words to make clear phrases? Or connected sense sentences? Or the accumulative information and/or argument of the speeches? How is it that these actors' vocal usage is so poor as to make clarity of utterance or consistent communication of the text a redundant experience for the audience?

It is, isn't it, even minimally, the responsibility of these artists to have the instrument ready and able to play with the writing to deliver what they profess to be: actors, storytellers? The craft of the butcher, the baker, the electrician or carpenter is what we pay for when we elect to hire them, to cut meat, make bread, wire my apartment, build my bookcase. Similarly the craft of the actor demands, at least, that I should receive, if I have been invited to watch them, vocal skills and body skills: To use their body and voice to transform into actors, so, that they can act a play, tell a clear story. If this crucial attention to their performance is not at the forefront of their task indicators, it can be a challenging night to endure. The performance of SWEET BIRD ANDSOFORTH which I attended was certainly a challenge of endurance for me.

Ms Scrivano, has not seemed to take any responsibility for the words of this text. How Mr Winspear must have pained over the obliteration of his obvious care of the translation of this play into English, I cannot begin to imagine. If it were told to me that the actors were each speaking a different language or a coded gobbledygook I would be prepared to believe it. Ms Scrivano either has no aural sensitivities and/or no ability or knowledge to assist her actors to a more useful craft practice. The content of this play as directed by Ms Scrivano is almost unintelligible.

The atyp space is becoming notorious for the difficult acoustical demands it makes on performers. This is the third production, this year, that has crumbled under the lack of care in the sound set design elements of production. Ms Scrivano has encouraged Hanna Sandgren to create a visual pleasure but has placed a raked open sided platform in the centre of the room with odd angled seating that assists the actors noises to escape in every direction without any channelling focal physical efforts to guide comfortably, with side-winged supports to bounce sound to the ears of the audience. It may have been ugly, to do so, maybe not, but it would have served this play more than the present 'pretty' solution.

For what Ms Scrivano does appear to have, which a lot of her generation of young directors have, and not much else, is a fairly interested visual eye (designer, Hanna Sandgren). It is, however, an eye, in this case which has encouraged a boring collection of derivative ideas from the last decade of 'theatre-design-as art' - yes, Virginia, there is a toilet seat, and it has been expanded with the trendy Video Artist input (Steve Toulmin) which mostly, with a mixture of pre-recorded and live images, serves as a repetitive distraction from the performers, more than anything else. All is enhanced with a pretty but general lighting design (Teegan Lee). The only aural sensibility Ms Scrivano exhibits is an ear for the pop chart of music to underline her characters journeys: FIRST DAY OF MY LIFE - Bright eyes (oh, really!) through to, amongst other boredoms, STAND BY YOUR MAN - Tammy Wynette (Oh, no, not again!).

The play concerns a group of young people in a rural town, (does it matter where these particular people come from? - no, not that I could semaphore from the action I saw) - on the verge of having to grow up and 'jump' into the future. These are hardly riveting or original concerns in Australian entertainment, television and local Australian film is weighted down with it, let alone the theatre, and even though there is an attempt at poetic language structure by Ms Naumann and translated lyricism by Mr Winspear, what was the urgent inspiration to translate this work, I cannot decipher. No new thing was revealed to me at this play performance. An original Australian text may have been just as ordinary.

Cutestuff, one of the characters in the play tells us "Being young is really overrated". I will add, "Being young is no reason for being lazy". Near enough is nowhere good enough.

As you can tell, this production lit my fuse of growing impatience with artists who feel 'putting it on' is enough. Emotional enthusiasms are not enough. Some dedicated preparation of your gifts that would do justice/honour to your endured training would be a useful statement of intent of professionalism at the least.

Please note that the Sydney Morning Herald (Wednesday, 24th August) sort of admired it. We were there on different nights, perhaps? The only way to know, which is likely to be your response is to go and see (and hear) for yourself, I guess.