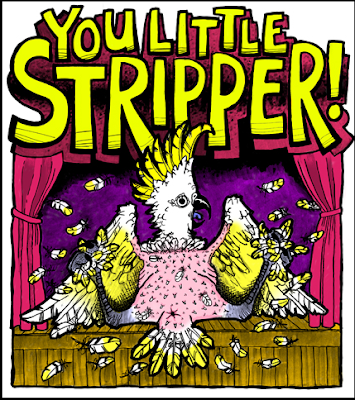 A burlesque performance, YOU LITTLE STRIPPER, at the Red Rattler Venue, Marrickville.

Friday night in Marrickville - a suburban Council district, fast becoming the place to be to share in theatre with a twist - at the Red Rattler a collective of experimental, political and sexually edgy performers have been corralled to give a night of robust and explosively joyous outlets for an audience of minorities who sometimes simply want to share their joy and invention for life together in a public gathering. It sure is liberating.

The energy in the theatre-building is infectious with goodwill and provocation. Dancers gyrate on the stands around the space to the music of D.J. Jack Shit. The capacity, dressed to thrill audience settle down to entertainment by some famous underground performers. At the Art Gallery of New South Wales an exhibition called THE MAD SQUARE, showing art from the combustible fermentation of Weimar Germany in Berlin, has nothing on the possibility of thrill that this performance offers in industrial Marrickville, I feel sure.

It is called YOU LITTLE STRIPPER,  and all of the acts involve the long honoured tradition of the strip tease made famous by Miss Gypsy Rose Lee. Hosted by the outrageous and insouciant humour of Dickie and Dickie (Matt Stegh and Mat Hornby) we are introduced to the individual takes on this great burlesque tradition.

First, Dallas Dellaforce exploding with finesse and sexual torture tease culminating in a long blonde, hair-metal wig that is magically and climatically blown spectacularly a la Bonnie Tyler in a cyclone of wind machine energy.An explosive start to the night. Annabelle Lines enters in slow motion and moves tantalisingly through her delicate routine, attractively starkers, almost. She is followed by K.K Hotpants, then Ms Pinky (Justin Shoulder) in a pleasing tease of mimed and attenuated career trajectory: fame to flame to crash - tres tragic! Imogen Kelly in white cat suit and not cat suit, tormenting us with her come hither and clear-off insolence of cat personality. The topper to the night being the sensational performance of Jazzy Jatz (Christa Hughes) in a house pull down of theatrical energy and proportions  with her glorious vocals and dexterous little 'beudy' strip skills and humour. She  has IT. IT, in bucket loads and to spare.

What follows the second interval is the section called STRIP KARAOKE where the 'punters' in the house get to sign up for a chance to guest strip for us all, with the help of DJ Jack Shit. An hilarious and courageous band of volunteers: a patron on crutches, slyly manipulating her lipstick and her torso, to a handsome and not so shy youth that would have roused Germaine Greer and would feature heavily in an addendum to her essay on BOYS, to an explosion of Punk energy with a cave man tearing off his clothes to Peaches "I DONT GIVE A FUCK", to a fully couturiered gentleman, who elegantly pealed layer after layer down to his red bare-arsed jockstrap and a body decorated with the most beautiful set of tatts and the best legs in Sydney, gyrating with the most mesmerizing set of relaxed joints, that only constant attention to yoga could mould. Fun for all.

Here was night of subversive alternative Sydney life. An event full of friends with interesting interests and relaxed psyches, happy and free, responsible and filled with a capacity to let it all hang out. Living in the world of 2011 - providing an alternative to the ordinary daily grind with exhibitions of extraordinary grinding of another kind.

Great to be there. It had been a big week and this was a great way to finish it off. Kapow!.

I hear the show is in Brisbane next, as part of the Festival. Is that true? If so, Brisbane will never be the same. At last? Or am I just out of touch? Mind you with its new Art Gallery, that town is somewhere to spend , well at least, a weekend.

Kapow!  Kapow! Kapow! As Stephen Sondheim told us in Gypsy "You've Go To Have a Gimmick". I will prepare for Kevin's Turn, next time, Dickie and Dickie, I promise. Just let me know with lead time.
Posted by Editor at 9:52 AM