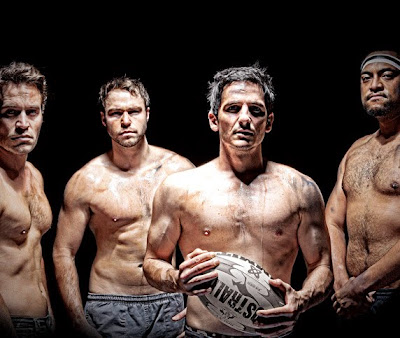 For 10,000 BEERS by Alex Broun, the work, direction by Lee Lewis is most accomplished. In fact, the degree of perspicacity that Ms Lewis has, and is developing, evolving, in all things theatrical, is brought to bear in this work on the stage at the Darlinghurst Theatre. A play that deals with an intensely masculine ‘tradition’ of an end of season alcohol binge, ‘pub crawl’ over a weekend for football players is skilfully brought to realisation with wonderful, imaginative, theatrical resources by Ms Lewis. It seems that she is following in the footsteps of other women directors who fearlessly decide to explore worlds that usually only men would be interested to tread in, or of ‘angels’, who have no fear of where they tread. Mary Harron who adapted with Guinevere Turner and then directed for film, the intensely psychotic masculine world of Brett Easton-Ellis’ AMERICAN PSYCHO in 2000, or, recently Kathryn Bigelow in the 2009 Oscar winner of Best Film, THE HURT LOCKER, about the war in Iraq, are two highly successful forebears of this gathering phenomenon that Ms Lewis may be emulating.

Like the recent production at the Darlinghurst Theatre, THE LIBERTINE, all the elements (bar the writing, in this case) of the production are first rate. There are thoughtfully honed, meticulous design elements to seduce an audience to watch the play: Set by David Fleischer, a black box with white markings (a familiar trade mark of Ms Lewis aesthetics, i.e. the black and white motif), with all black accessories in the properties department and even a costume design for the football team,'The Pirates', of black and white sportswear - the detail is great. Accompanied by very attractive, subtle and moody lighting states by Luiz Pampolha there is a kind of beauty in these aesthetics about a world that is essentially ugly in almost every way.

Ms Lewis has conjured her team of four actors: Gus Murray, Andrew Steel, Anthony Taufa and Matt Zeremes, into giving wildly energized commitments to play a team of some 27 men, that focus down to just four principal characters. The company of actors begin, literally, naked onstage and then gradually bring the world they live in, into life, in an extended overture of imaginative invitation of building the given circumstances of the world of the play. These actors rather than flagging with the demands that Ms Lewis has asked of them, and it is very, very athletic, seem to grow in clarity and structure in the final twenty minutes of this physical world of athleticism and extreme drunkenness -10,000 beers later. Mr Zeremes is especially engaging as the comic actor in this team but is well supported by Mr Steel in the final Bacchanalian climax of ugliness. All the actors give their all.

The play is written by Alex Broun, who from the program notes, knows the world of the football codes well: a Rugby Union journalist and Team Media Liaison for over 15 years. He also has some 75 ten-minute plays under his belt. His background experience shows. For this play is essentially made up of short scenes of observed naturalism. They do not, when strung together, over the 80 minutes or so, go very far or very deeply into the subject matter. We see, mostly, comic sketches of different stages of the long, long weekend of a Sydney drunken spree by over charged ‘beef-heads’. It shows a group of young men that we would avoid if we met them in reality.

What Mr Broun does not do (except, occasionally in pencil-thin drawing) is address any of the issues that this team of men face: age, sex, personal independence and team angst. In the last ten minutes the 10,000 beers leads to a homosexual rape of one of the members of the team and is resolved mostly in dumb-show. Here, is where the play should have begun, I reckon, if one wanted a play of importance or real interest for serious theatre goers. That it does not examine this in any real psychological depth, that the author chooses to rape a male rather than dealing with the now scandalous history of the rape of women in our various football codes, seems an avoidance of real exposure of Mr Broun’s unique perspective and knowledge of this intense male world. Rather, we have a fairly dull showing of a weekend of bad behaviour that is more or less excused because it is funny – funny in a truly bone-headed way. The playwright avoids the contemporary issues of societal concern exposed relentlessly and regularly by his fellow journalists in the press and television, that might enlighten the rest of us to help us arrive at a closer understanding of this world and the rank cause of its behavioural extremes.

Without the wizardry of Ms Lewis and the commitment of the whole company, especially the actors, this may have been an unbearable evening in the theatre, for me, but, one must not forget the old maxims of “Horses for Courses” and “One man’s Poison may be another man’s Poisson”. Some may find this production a good night out, others may not. I hope Mr Broun has the courage of his Rugby Union and 15 year observation of team liaison to go deeper into the dark weekend which he shows us here (which simply presents a comic book series of hilarious adventures) next time round. It could end in a championship season if he did, with his knowledge.
Posted by Editor at 10:29 PM

I don't know who to believe!

You can believe both of us.

As in the artshub link you have sent, I too thought the writer, Alex Broun had not really written a play worth catching. What I have praised is the production, direction and the acting. Heroically committed considering the material they had to work with, I reckon.

Give credit where it is due.