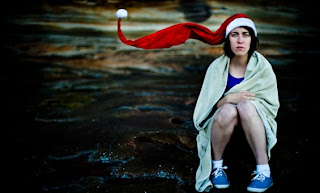 "It's the day after Christmas in the seaside town of Rainwood. Nana can smell burnt  chicken. Dad is glued to the TV and Freya , as always, has a mystery to solve. Like any normal 10-year-old girl Freya Stanley loves Pictionary. Pig Latin and and 80's slasher movies. BOXING DAY is her story: a darkly comic tale where imagination reigns, and a little girl will do whatever it takes to keep her family together."

Freya's mother has recently died. Cancer, I think. Her father works off-shore, an oil rig, I think, and  is absent a lot and not a very good father, really - he gives Freya an air rifle for Christmas!  She is being brought up by Nana. Nana is a little vacant and child care a little beyond her range these days- she does her best. Freya has a girlfriend/neighbour. She plays and invents a life as best she can. The local families are worried for little Freya's welfare. Freya decides she needs more care, more attention and does what child psychologists might diagnose as: "acts out" and causes an event of national news worthy focus, after a disastrous Christmas family lunch. It is all, unfortunately, based on fib, a lie. Freya is in trouble. This story is book ended with  a mock funeral, serviced by the two little girls. The funeral is set up and then we are taken back in time to be told in chronological naturalism a very conventional and over familiar story, lacking in any real insight or mode of originality.

Neatly, after nearly 90 minutes, we end back where we began, at the mock funeral, and the play ends. The direction is ploddingly naturalistic. Neither content or mode of presenting are of any real arresting interest.

"BOXING DAY by Tin Shed. Three years. Five creative residences. Eleven drafts. One trip to Scotland. One hundred crap Christmas cracker jokes. One dead laptop."  Writer, Phil Spence; Director-Co Dramaturg, Scarlett McGlynn; Co-Dramaturg, Polly Rowe have toiled over this play, it seems, and, for me, it is in the experience, a very dispiriting disappointment. I am not sure whether it is a children's play or not.

As a children's adventure in the theatre it is very boring for a 2011 audience. Check out THE BOOK OF EVERYTHING for content and story telling skills. Check out THE ADVENTURES OF ALVIN SPUTNIK: DEEP SEA EXPLORER,  for content and story telling skills. If BOXING DAY is meant as adult fare, it is very ordinary and tedious, indeed. I'd rather watch re-runs of POLLYANNA from the Walt Disney team of yester-yore on TV.

The 'gimmick' and some raison d'être for doing this play at all, maybe, is the playing of Freya, the ten-year-old heroine, by an adult, Holly Austin, as a showcase for this artist's playful clown persona, but, it is not enough to justify or satisfy why this play found its way onto the Old Fitz curated season as it stands at present. Oddly, the usual spontaneity of play that Ms Austin has in her own devised work seems more than slightly hemmed in by the conventionality of the naturalistic tale and the lack of directing  bravura by Ms McGlynn. In fact, Annie Byron, who impersonates a number of characters, including the little girl playmate, gives Ms Austin a run for endearment with her deft creations. Alan Flower has the underdeveloped and thankless function of feckless parent to create and is dignified in his creativity.

The design by Rita Carmody is comely and functional, the lighting by Christopher Page, with all of those hanging bulbs, lacks sophistication of atmosphere, with the sound design by Jeremy Silver being the better part of the belief system in the events of the play. Others have found the work charming. I found it unbelievable that it was been presented at all. Australian content or not, this play is not a very sophisticated addition to the repertoire in any way.
Posted by Editor at 9:32 PM