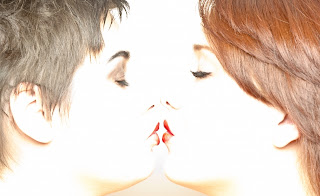 Cupboard Love in association with The Sydney Fringe, presents COUNTRY MATTERS by Danielle Maas and Jessica Wallace at the New Theatre, Newtown.

COUNTRY MATTERS is a fairly audacious effort. Two young women: Danielle Maas and Jessica Wallace have devised, directed, designed, performed and produced an exploration of "their sexual identities ... With unflinching honesty and unwavering humour, their tales explore everything from vaginismus and violence, lesbians and Lolita and dating to dildoes. It's flirtatious feminism for a new millennium..."

The questions to ask, when we have lots of full 3D female nudity with interactive audience participation, encapsulated in some 19 episodes, loaded with confronting but oft times witty monologues and duets, both verbal and physical, at this early end of the new millennium, how will that millennium end, if this is the signs of the millennium's  theatrical beginnings? And, next, are we ready for it, yet? Lots of boundaries are crossed. Lots of wit and intelligence are on show along with lots of naked, lavish pulchritude. The balance may be their in favour even at this end of the millennium, in September, 2011.

From the program (a guide to the material, to encourage or dissuade you) by Danielle Maas:

"LOVE, SEXUALITY and WHY NOBODY KNOWS WHAT A REAL CUNT LOOKS LIKE ANYMORE.

Writing a play and losing your virginity - everybody remembers their first time (hopefully). And although I found this process daunting, I discovered that this was a journey born not out of catharsis, but compulsion. I think sex is overrated annd underrated. I don't think humans can survive without competition. I think feminism is an idea, not a religion. I don't think that politicians have the right to interfere with my uterus. And some days, I don't know what to think.
Those are the days where I wander through the streets, eat cake, and fall in love with my soul mate, who I haven't met ... yet.

This story is dedicated to anyone who has survived the unimaginable, fantasized about the forbidden, or had a fat day. And when your time comes, I hope you remember to put your stilettoes on and take your granny panties off. (Because I didn't.)"

The writing is often smart and waspish. Funny and political.

What the present production needs, still, is an outside eye (a director), to help the women to shape and structure the material for more impact, and to stage, especially the physical sorties, with more discipline. It is a very short showing but it will help the company see what works and what does not. It is rough and brazen but courageous and often amusing, if not always on accurate target. It would be interesting to see it again with further workshop for refinements of style.

I began the week with the full frontal nudity of the men in 10,000 BEERS and so count the nakedness of the women in COUNTRY MATTERS as justifiable aesthetic balance. Ms Maas and Ms Wallace and their team, Amelia Ulrick and Cody Baxter are graduates of the Australian Academy of Dramatic Art (AADA). Interesting work. A worthy Sydney Fringe contribution. This work deserves more than their families and friends to see it.
Posted by Editor at 11:47 PM