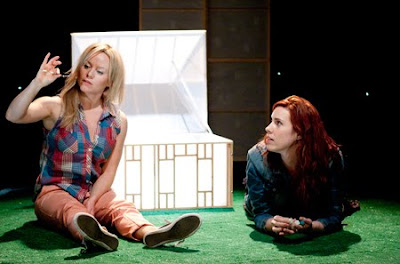 Griffin Independent and a collective led by Melbourne based Clare Watson present SMASHED by Lally Katz at the SBW STABLES, Kings Cross.

In Sydney we have not seen much of Lally Katz' work. NEIGHBOURHOOD WATCH, the latest play by Ms Katz was recently seen at Belvoir and was a great success. Melbourne friends felt that that play was "Lally" persuaded or interfered with, for they did not think it was the authentic, unadulterated voice/imagination of Ms Katz at her best. Ms Katz may disagree, for from all accounts I've read, she had a great time writing and 'birthing' NEIGHBOURHOOD WATCH. Having mostly only read her work, I thought NEIGHBOURHOOD WATCH was a conventional shift away from her usual creative bent.

So it was with anticipation that I saw SMASHED the other night. A short (45minutes) work, built in collaboration with many artists across the different disciplines required for theatre making, led by Clare Watson in 2005, this has been a happy reconstruction by the same team of the work. Clare Watson is responsible for the Concept, Direction and Design of the project.

Two female figures, Hazel (Suzannah McDonald) and Ruby (Katherine Tonkin) like giants, hover over a green carpeted floor, with a river/stream winding glitteringly across the space, with scattered delicate constructions to represent a small town: houses, church, caravan etc. - like magic lanterns, lit glowingly from within. The walls of the space lit with little lights like the canopy of the starry universe surround them. Maybe, one of them has been 'smashed', and one of them is reaching back through time and space to reconnect before moving forward alone. A story of grieving, perhaps. That point when 'letting go' is imminent and necessary for the survivor of the relationship. The play scenario is beautifully surreal and tantalisingly a puzzle of gentleness and mixed chronological events.

It is a very delicate work. Conceived, directed, designed by a woman, written by a woman, for women to perform. One feels the power and magic of the energy of the female voice as it interrogates the paths to living in the world. It does feel to have a distinctive female 'tidal' pull.

Like the tone and affect of DIRTYLAND by Elise Hearst and PICTURES OF BRIGHT LIGHTS by Maree Freeman, earlier this year, I find SMASHED a kind of significant relief in watching, listening and experiencing the world through a very interesting prism - that is a female prism, not a male one.

My only unhappiness was in the playing by Ms McDonald and Ms Tonkin who seemed to know too comfortably what they were doing and did not show the depth of identification and passion to these women and their story that they may have had with less certainty under their belt in 2005. They needed to be telling the story for the first improvised time. Fundamentally, I didn't believe them or truly empathise with them. I sat outside them and loved the play and visuals despite them.

The Lighting Design by Richard Vabre was glowing and clean. The Composition and Sound Design by Kelly Ryall inventive and unobtrusively atmospheric.

It could have been a great night in the theatre, it was for me, ultimately only a glimpse at a good and interesting play by a very exciting playwright.
Posted by Editor at 10:04 PM

I saw this tonight Kevin and found it a somewhat mysterious work (more on that later) in the sense of the “time travel” theme that is behind it and is made patent – one girl says she can do it (time travel) really well, yet the other is not as sure she can do it. I was somewhat disappointed, although knowing in advance it was only 45 minutes, that it ended when it did at that length as I felt it could have been further developed to be longer (I saw another comment somewhere else to this effect also). However before writing this I also did some other reading about it, especially the interview with Ms Katz in Time Out recently on 24 August. It is an early work of hers from 2005 and as you say I think this is the first reprise of it since the original Melbourne production, with the same duo of actors, same director. In the Time Out piece Ms Katz says she would be afraid to fiddle with it at this point, possibly in my view because this is really the original production and she regards it as a reunion of old friends. So hardly something you would do, rewrite it, to perhaps develop it more. So it will likely always remain sealed in this bubble, and why not.

The set was indeed an interesting evocation of a sort of toy town life and the somewhat cheesy 80’s soundtrack (Toto, don’t make me do this) put you in the mood for some retroscope travel. Given its relative brevity there were any number of things your imagination could lead you to believe. I have seen no explanation of the title Smashed. However I was sitting in the very front row and played with the “river” flowing across the fake green grass – it was actually made of smashed glass fragments. The motif of the miniature car, the references to the request for one to reluctantly drive, the Smashed title of the piece all led me on my own time travel imagination to conclude that this was all about a fatal auto accident. Sorry if this is a spoiler for anyone yet to see it (cover your eyes now – too late) and I always get supposedly obvious movie plot lines wrong, just a thought.