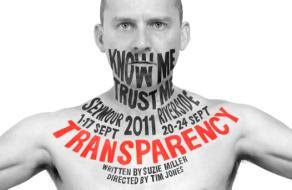 Presented by the Seymour Centre in association with Riverside Productions, TRANSPARENCY by Suzie Miller at the York Theatre, Seymour Centre.

Suzie Miller won the 2008 National Kit Denton Fellowship for writing with courage for TRANSPARENCY. This is the play's Australian Premiere, having, previously been seen in Belfast in a season at the Ransom Theatre Company.

TRANSPARENCY tells the story of a man, Simon (Glenn Hazeldine) who is trying to live an honest life while forced, by his actions (assistant to a child murder) as a 10 year old child, to live under an assumed identity - to live with what is fundamentally a lie. "For Simon, the world he has built was a second chance: in the eyes of the law he has paid for his mistake. Given a new identity, new history and a single confidante, Andy, a court appointed therapist (Celia Ireland), he has successfully buried the truth of his past; even from Jessica (Amy Matthews), the woman he loves". Multiple circumstances in Simon's daily life bring mounting pressures on him, and the need to reveal his past becomes a growing and almost unbearable conclusion, despite the posssible impending personal consequences. The Director, Tim Jones, responded to TRANSPARENCY "not only because of its compelling narrative, but because it intelligently investigates ... questions about trust and truth in relationships. It asks, at a very personal level, if the price of truth is worth it." A very strong Ibsenite theme. GHOSTS and THE WILD DUCK springs to mind.

Glenn Hazeldine as Simon, gives a truly terrifying and great performance. The narrative journey of this man's confrontation with the inexorable demands of his personal and legal situation is painstakingly and painfully created. The emotional charting and crafted choices by Mr Hazeldine to take us and convince us of Simon's dilemma is technically flawless and the character's story is harrowing to witness. Like the work of Linda Cropper and Russell Kiefel in AND NO MORE SHALL WE PART by Tom Holloway at the Griffin Theatre last month, this performance 'costs'  this actor enormously. Here is courage, indeed.

Certainly Ms Miller enters a world of fierce taboo and contention and is indeed brave in doing so, but the problem for me with this play, although effective as a psychological horror, whilst watching it, was a lack of three-dimensional characters (other than Simon) and discussion around the issues of the play. Here a closer look at Ibsen's genius would be invaluable for the writer. The experience of the play for me became excruciatingly voyeuristic and ultimately unbearably misanthropic in its view of the world. I disconnected from the work as I watched it - it began to feel like a modelled case study at a didactic lecture for societal welfare issues- simplified role models for teaching purposes. I felt that, other than Simon, all the character's in the play tended to be relatively superficially investigated as people, in the writing,and rather, they simply carried the function of mounting stakes for the writer without much complex motivation: two dimensional, selfishly motivated "monsters' of compromising behaviour. Andy, a psychologist who needs to maintain her theories of practice over necessary realities of care for her client. Lachlan (Ed Wightman), an unhappily married man of dim wit observations of his own circumstances and cravings; and Jessica, the wife/partner of Simon, who wilfully opens a Pandora's Box of crisis and pursues so unsympathetically her own needs of parenthood, that I had no sympathy for her at all. Jessica's behaviour driven from her physiological need to breed leads to physical and psychological violence of a reprehensible kind.The next draft of the text might be more powerful, when these other characters gain more complexity. That Anna Lise Phillips creates a complexity of motivation and action for Camille is a testament to this actor's creative energies to build an inner monologue of real unspoken motivation  that gives real dimension, despite the limiting text she has to speak. Ms Ireland, Mr Wightman and Ms Matthews attempt to breathe a third dimension into their responsibilities but are undermined by the writing opportunities.

The world of Edward Bond's SAVED came to me as I watched TRANSPARENCY. That play is infamous for its sixth scene, where some young children/youths murder a baby in a pram with a brick after some excruciating torture. But what Mr Bond manages to do through the course of his writing is to reveal the social context of the characters that helps illuminate the tragic origins of the actions of these blunted human beings. One develops an insight, and, possibly, an empathy for all of the characters in the play. Ms Miller does not really do that. She simply shows us these people and their simplified needs to serve the action of the play - I didn't think it was enough and felt diminished as a human for having watched it. All, but Simon, were people I would prefer not to know, if that is all they are. Ironic, indeed, considering Simon's history.

This intimate play performed on such a wide space of stage, (designed by Stephen Curtis), suffered from the directorial solutions of entrance and exit that slowed down the story and maybe allowed too much time to think during the experience. The set itself had interest and some 'beauty' aided by the lighting of Verity Hampson and sound design of Jeremy Silver.

The choice of TRANSPARENCY by the Seymour Centre under the direction of Tim Jones is impressive and one to be applauded and standing beside STAINLESS STEEL RAT by Ron Elisha, also recently presented here, underlines the commitment to new Australian work by this organisation. Flawed, though both works are, in my experience of them, but still arresting. Interesting. Vivid for their contemporaneousness.
Posted by Editor at 10:18 AM