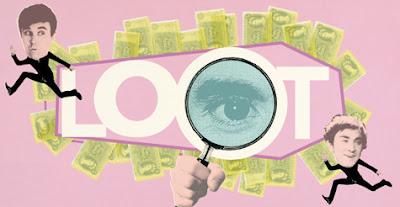 Sydney Theatre Company and Qantas present LOOT by Joe Orton at the Drama Theatre, Sydney Opera House.
LOOT by Joe Orton was written and premiered in 1966. It, followed the success of ENTERTAINING MR. SLOANE on the West End stage, the year before. Orton with LOOT “ extended the boundaries of farce by taking it out of the bedroom and into the funeral parlour: this is Feydeau with fangs or Ben Travers rewritten by a socialist anarchist. The action hinges on stolen bank loot being stashed in a coffin while the displaced corpse (of one of the robbers mothers) is bundled about the stage. The physical mayhem, however, simply becomes a platform for attack on the hypocrisies of mourning, the fake pieties of the Catholic Church and the venal brutality of the British Police….”. Language was one of the keys to both plays (all his plays, really); the comedy lies between the sustained strangeness of the realities of the settings and the formal gravity of the verbal style.In LOOT (1966), which was then a rudely topical satire, “Orton remains a consummate stylist. At one point , the detective, Truscott proudly announces that he is the man who once tracked down the limbless killer. ‘Who’, someone enquires aghast, ‘would kill a limbless girl?’ ‘She’, replies Trustcott, ‘was the killer.’"
In the introductory program notes about this play,by the Artistic Directors, Andrew Upton and Cate Blanchett, we are told : “Brutality and comedy are the dual foundations of Joe Orton’s plays… And even though some of the subject matter may have lost its piquancy in the last 50-oddd years, Orton’s dramatic voice is still distinct and his dissertation on human nature still rings out loud and clear.”

In this production by Richard Cotterell, it is when the satire over issues that no longer have the sixties piquancy of audacity, and when not served accurately by the skill of his farceurs, around style with language and physicalities, that the play stands nakedly languishing in its time zone. Originally, Orton in tilting at death, the Church, the English police and the idea of English justice was attempting to ‘shake the audience out of its expectations’ and believed that ‘They need not so much shocking, as surprising out of their rut.’ And although some of the audacious physical juxtapositions - the mother/corpse, upside-down in the cupboard, for instance, still strike one’s funny bone, it is the dexterous verbal surprises that keep one agape with open mouthed laughter. The content does not really shock the regular theatre goer anymore.Who knows who it would really shock any more? Recent film and television have settled that. But it is certainly full of surprises.
The set design by Victoria Lamb is fine in its terribly accurate eye for period detail. This world is depressingly suburban and real and so the hi-jinx that it surrounds is more startlingly contrasted. An open coffin cosseting a mummified corpse sits in a really 'real looking' living room and the 'sixties anarchism of British counter-culture led by thrill seeking youth confronts a pious mourner, a serial killer and a psychopathic policeman – all revealed, conventionally disguised, in the respectable garb of the comfortable middle class.
Robin Goldsworthy as Hal and Caroline Craig as Fay do not seem to have the measure of the style of playing, both looking uncomfortable and miscast in the duties assigned them. Mr Goldsworthy giving a very self conscious and manipulated reading of the character and situation and the usually reliable Ms Craig appears oddly unfamiliar with the style and comedy of the genre, and like Mr Goldsworthy is too obviously effortful in her characterisation. The work from both these actors does not reveal any inner organic source of character, and, rather the characteristics that we are given appear to be stuck on, contrived, forced and hence deadly to the spontaneity of the ‘madness’ of the world that they are creating. The first twenty minutes or so of this production grinds silently on, in what looks in the hands of these two actors, painfully, like old fashioned exposition. One can hear the verbal jokes stacked throughout the writing in this first twenty minutes but the timing mechanics and physical thought processes of these two actors are not engaged accurately to bring this work to any comic reward for the audience.
But then the ‘cavalry’ arrives, and comes to the rescue of the the play. The production really takes off with the late presence of Josh McConville (Dennis) and then the two great clowns of farce: Willaim Zappa (McCleavy) and Darren Gilshenan (Trustcott). Like locomotives of much tonnage the sheer momentum of the stylistic knowledge, both physical and linguistic, particularly after the interval, that these actors bring to the play, creates such speed, that the comic deliciousness of a well oiled comic team slipstreams the audience into a breathless awakening, and chase, to keep on top of the situations and outrageous Ortonesque views of the world – Joe Orton, “the Oscar Wilde of Welfare State gentility.” Mr Cotterell can bring to bear his immaculate discipline and vision at last.Mr Zappa and Gilshenan, artists of the genre to be studied and cherished.
LOOT, had been produced by the STC before and is memorialized by the STC, in this program, with photographs and press reviews of the Richard Wherrett production of 1988. Orton’s last play, WHAT THE BUTLER SAW (produced posthumously in 1967), is what I regard as one of the great comic masterpieces and LOOT presages that genius. WHAT THE BUTLER SAW demands of the actors the verbal and mental dexterity of the Restoration Comedy and at the same time the physical dexterity of the 'low' comic farceur. Both skills are rare, but, rarer still, together. I reckon Mr Gilshenan and Zappa ought to have a go at the Doctors Rance and Prentice in that play with Mr McConville and Helen Thompson supporting. Maybe next time.
Then, again, perhaps Richard Bean should get a look in? What about Mike Bartlett? Just to keep us in the swim of contemporary comedy. LOOT for all of its skill offers, is dated in its content. Not so shocking. Without Gilshenan and Zappa this would have been a terribly mean evening. Knowing that the subject matter of LOOT has lost its piquancy over 50 odd years of cultural change, why not find a play of our times for Mr Cotterell that would allow this superlative craftsman, to offer STC audiences a new experience in the realm of farce?
Hmm.

References
PRICK UP YOUR EARS by John Lahr. Published by Allen Lane -1978.
STATE OF THE NATION by Michael Billington. Published by Faber and Faber Limited -2007.
Posted by Editor at 7:50 AM

You make some good points but i think the biggest (and most obvious) problem of that production had to do with the fact that the director and Mr. Gilshenan didn’t really solve the Inspector... at all.

Did we see the same production? The STC one? At the Opera house?

For all of his clowning skills (which are considerable), Mr. Gilshenan was appalling..! For starters - did he even make an attempt at an English accent?!? For the first 10 minutes after 'the cavalry arrived' i couldn’t get back into the world of the play (regardless of how flawed it may have been set up previously). What we witnessed, and paid good money for, was a massive case of an actor 'not going to the role' but 'making the role come to them' (something the man is a serial offender of).

But more to the point - where was the MENACE?? Orton himself described the play many times over as Pinter meets Wilde. Sure, we got the Wilde but where was the danger? A lot of that HAS to come from the Inspector (surely the point Orton was trying to make with this character is the nightmarish absurdity of not just the police but of the Established Order in England at the time). Instead we got a cutesy, pandering ocker actor who made some great poo jokes.

In short: it destroyed the show.

And yet, you pay him public tribute as if he were Charlie Chaplin. For someone as learned as you are Kevin, you have some very strange opinions. I suspect that this blog isn’t so much a reflection of your honest feelings but more a forum for you to pat the Sydney Theatre Establishment on the back and further your own agendas (whatever they may be).

I’m very interested to see if your moderator does indeed all this post to become public (freedom of speech and all that) and indeed, how you reply.