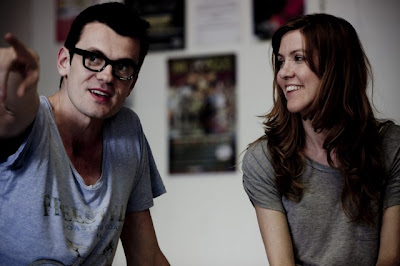 In the program notes Jane Bodie, the writer of this play, tells us:

“It’s important to say that I have always wanted to write a romantic comedy, however I never imagined myself writing a play about cricket.” In looking for the formula to write a romantic comedy, Ms Bodie had one rule from ‘millions’ stick in her head. … ‘Always remember romantic means sexy and comedy means funny’. I then thought about the fact that I am someone that hates rules and following them. But I couldn’t help thinking about the fact that in both the loss of a loved one, and the loss of love, it is as if all the rules we believed existed have been violently broken. The world feels suddenly lawless, as if justice and balance will never be restored. Then many believe there are five stages to grief, and then of course there are five tests in a test match series. … Which brings me back to my first conversation with Sam (Strong) at Griffin. I told him I wanted to write a romantic comedy about grief, Sydney and cricket. He did what all good artistic directors should do at that moment, he smiled and bought me another glass of wine.”

I am happy to tell you all that Ms Bodie has indeed written a play about grief, Sydney and cricket, no matter how incongruous the combination of those three elements may, at first, seem, as ingredients for a romantic comedy – “a rom-com” – as it is known in the industry. This is a rom-com of a positively delicious kind. It makes you laugh, and often, and loudly, and also cry, gently, but deeply.

Three actors have responded wonderfully to the gifts of this text: Belinda Bromilow, Tony Llwellyn-Jones and Nathan Lovejoy. Directed by Shannon Murphy, gently and with discretion, no intrusive director’s fingerprints laid over this production - remarkable in the experience of recent Sydney work, at least, remarkable enough to note, and with relief, although, it seems to be a hall mark trend, mostly, of the Griffin production values under Sam Strong’s care. In my experience, relievedly. A trust in the writer as the instigator of the enterprise! How amazing!!! As the great theatre artist, Michel Saint-Denis has said: "It is the author who directs the director to direct his play.” And only if the director as the skill and discipline to respect the writer enough to read him closely and not take the auteur position of a vandal.

The design by Rita Carmody is restrained and elegantly sufficient, even wittily economic for the many sites the play moves to – despite the arty overstatement of the Tracey Emin reference to her signature work MY BED and the blue neon light boxes, to unnecessarily title scenes. Verity Hampson once again comes up trumps with a sensitive and beautiful lighting design and with the tender and resonant score composition by Steve Francis rendered in the impressive sound design by Nate Edmondson, all is a whole. This is a very impressive, assured production. One feels safe and therefore, open to the journey of the play, from the start.

The writing by Ms Bodie is deft and carefully layered with craft. Cricket and all its language absurdities and catch phrases are woven discreetly and wittily throughout the play, beginning with the very title of the play: THIS YEAR’S ASHES. The ironies of our modern world that is ‘connected’ by the iphone and other such gadgets that gives “ no reason to leave things behind anymore, to miss anyone, because we can stay in touch, at all times”  and the product that Ellen (Ms Broilow) is pitching to the world for her company employers, the “I…am…not lost”; The…”I am over here”; or finally, “I am still here” - a key ring attachment (what if we lost our keys?), is planted sadly within the floundering despair of a young woman. For, disguised in this romantic comedy structure is a very moving contemporary examination of one of the cultural ‘illnesses’ of our times: loneliness. Loneliness, in this case, sprung from unrequited grief and guilt and drowned in behaviour smothered by the anaesthetic of alcohol and promiscuous sexual encounters.

This “hilarious, touching urban fable of connection and redemption, of moving and moving on” has the assured hand of Ms Bodie who has the wicked gift of being all: brutal, insightful and bitingly funny, step after step, in this gorgeous scenario.

THIS YEAR’S ASHES is, also, a backhanded love letter to the city of Sydney and its woebegone denizens (of a certain milieu): “I’ve met all the people I want to here. …I can’t even bear the way people …walk in this city. Everyone’s so pleased with themselves. Whole city is, pleased with itself, with how it looks, its views, its smug fucking water views. And I’m amazed anybody manages to make it into work at all, the amount of time they must take getting ready…. Everything here is so FUCKING shiny, it hurts my eyes, to look at it. And I don’t like frappes. I hate frappes. And suntans, spray tans, sushi, swimming in ocean pools, jogging, bridges, paninis, Pilates, the harbour, sunsets, hot pants and small dogs, small gay dogs and cockroaches”. There is much, much more….!

The performance of the night is in the intelligent reading that Mr Lovejoy brings to his three men. There is such wry intelligence here not only in the delivery and timing of his text but in the subtle physical registrations of character differences and  in the comedy of the moments. There is also tenderness and empathy and the richness of a man in love in the long scene of seduction in the second act from his creation of Adam. Who would not fall in love with Adam? This performance supports the impression he made in May last year in a very different role in WAY TO HEAVEN at the Griffin. Seeing him and Toby Schmitz together in Bell’s MUCH ADO ABOUT NOTHING this year urged me to think of a play to put them together – what a load of intelligence and wicked invention could be struck for our delectation with them bouncing off each other? Ms. Bromilow gives the best work I have seen from her and is especially moving in the reaching out to her father, played movingly by Mr Llwellyn-Jones, especially in the revelation speech at the end of the first act. The rapport between the company is remarkable and graceful in its mutual generosity.

This is one of those rare, in recent times in the Sydney theatre going experience, (NEIGHBOURHOOD WATCH, nearly so), at which audiences can feel the joyful, coalescing experience with all the artists’ offerings and feel subtly the embracing cloak of a deeply moving, shared experience. This is not avant-garde writing in either content or form, but very, very good writing. It is rare. It is addressed to the general human experience and it endows the gathered random audience with a sense of a common human bond. Of real connection. Funny, sad, grandly, modestly human.

Book quickly. Do go. Another gentle treasure from the Griffin Theatre Company. No to be missed.

P.S. I need to declare that Jane Bodie is a colleague of mine and a new friend. If this sounds like a love letter to her, I am very, happy and pleased to declare it.
Posted by Editor at 9:50 PM