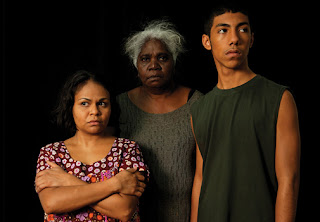 BLOOODLAND is performed in Yolngu language and pidgin English. Instigated by Andrew Upton & Kate Blanchett in conversation with Stephen Page from Bangarra Dance Theatre, this work flowed from Mr Page's connection to North East Arnhem land - a community which has been a constant source of inspiration for his work.

Kathy Balngayngu Marika and Djakapurra Munyarryun, two cultural consultants from this community have worked with Bangarra Dance Company and Stephen Page in earlier works and with the collaboration of Wayne Blair have spent some eighteen months in conversation to develop this story and production. They were determined  "to tell a story that was not a piece of nostalgia or a piece of white guilt, but (to be) black on black and directly related to the community today."

It is this that struck me mesmerically during my experience of the performance last week. The first image is of an animal-spirit (dog?) crawling across the black gloss floor, scrawled with chalky white tracks left  as a record of the mining equipment, digging, taking and leaving (Set Design, Peter England), and sniffing to a leaning telegraph pole from which a single cable, high up, fuses and colours into sparks with hint of flame and deadliness. The full circle of the story will unfold the truth of this deadliness. The animal scurries into the enfolding "Long Grass", a hiding place, a sacred place, a secret place. Next, an aboriginal woman, Cherish (Ursula Yovich), crazy with energy runs into the space out of the forest  with a blue plastic bag and raves in a repetitive mantra  while tipping onto the floor, spilling, a cache of mobile phones. The image juxtapositions strange, meddlesome, curious.This world of the 21st century rubbing, eroding a culture, "the world's oldest living culture, stretching back over 40,000 years'', with the vivid custodians of this world standing with one foot in both worlds, flinching, blinking, that  is making 'marvellous' and frightening demands on them, is the crux of the experience of this performance.

"BLOODLAND is about two families living in remote communities and their frustration at being in two different worlds in the 21st century. They cling to traditional cultural heritage whilst engaging with the benefits of western society. But with the poisons of alcohol and drugs, economic disadvantage and social dysfunction, these families face many dilemmas."

With the strange combination of the language sounds of these people (no sub-titles) and the elegant rituals of community life enacted with such consistent, leisurely demeanour, dance like, accompanied by a sensitive soundtrack that includes traditional songs from the Munyarryun clan (Composer & Sound  Designer, Steve Francis) and a beautiful shifting lighting design by Damien Cooper, highlighting the subtle modern and yet timeless feel of the costumes (Costume design, Jennifer Irwin) a spell of focused absorption and a gathering care concern is spun. I became concentrated and moved. The contemporary satirical contrasts of the intrusive white corporate culture, jarring, but a necessary counterpoint. Dilemmas, indeed. I was reminded of the experience of the 2006 Rolf de Heer and Peter Djirirr film TEN CANOES. And like the film journey, BLOODLAND gives an insight into this culture and its worldly struggles as a gift. Most of the performers are not 'professional actors' and it is a major part of its guiless achievement of impact. It reveals itself without 'drama', although it is full of it - the inevitable melodrama that real life can become when presented on  the stage. For the record one should name all the performers (Elaine Crombie, Rarriwuy Hick, Rhimi Johnson Page, Kathy Balngayngu Marika, Noelene Marika, Djakapurra Munyarryun, David Page, Hunter Page Lochard, Kelton Pell, Tessa Rose, Meyne Wyatt and Ursula Yovich) for I feel that along with NAMATJIRA, from bigHaRT last year at Belvoir and the recent Andrea James production of BULLY BEEF STEW at the PACT Theatre, Indigenous theatre has been growing into a very positive part of the Australian storytelling fabric. Its form and content stretching and surprising.

I thought this was an achievement and I was gratefully surprised by my absorption and education. Should be seen by as many of you with a sense of theatre as politics, theatre as enlightenment.
Posted by Editor at 8:21 PM