Four Deaths in the Life of Ronaldo Abok 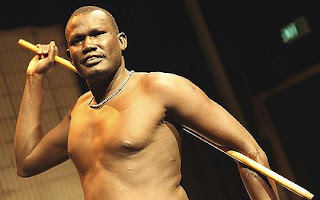 FOUR DEATHS IN THE LIFE OF RONALDO ABOK by Ian Meadows is the third production of a new program in its first season, under the banner of "true west theatre", experiencing theatre work created in Western Sydney, by artists from that community.

Ian Meadows and Adam Booth and their company: "small things productions", have been working with the Southern Sudanese community in the outer Western suburbs of Sydney. "The goal of this theatre project became to bring some of the journeys of the community (the Southern Sudanese) and its individuals to the stage. To dispel the myths and create a cultural bridge that only storytelling can achieve, fostering understanding through a recognition of another's hopes fears and joys. Sharing the common dreams and desires we all hold dear regardless of ethnicity, colour, location or wealth …After months of workshops sharing stories, thoughts, song, dance and culture (and plenty of time debating African politics and the finer points of the Dinka language!) we (they) emerged with this."

Ronaldo (Johnson Ngor) is studying screen writing and has presented his tutor (Adam Booth) with a derivative version of a Bruce Lee Kung Fu, adventure. Ronaldo is advised to begin again and to reflect on his own life and try to tell that story. As Ronaldo takes on that advice and we, then, are engaged with his extended Sydney family and their 'adventures' and daily confrontations.

We go to a cinema workplace where Ronaldo meets fellow employee, Rachel (Amer Achiek) and begins a courtship that is humorously found to be within traditional expectations and a modern modem. Rachel is a modern girl!!! The course of true love may not run easy for Ronaldo! Ronaldo, also, has an aunt, Mary (Awek Akech), with several children and a sick relative, Atem (Abraham Ajok), in hospital. In this world we are told of the journeys through a war torn and inhospitable landscape to refugee camps to the Australian day to day interactions. The "epic journeys (that) pitted these people against searing hot deserts, frightened locals, government planes and bombs, militia on horseback, famine, thirst and hostile wild animals". It is these stories that brings home the amazing heroics and resilience of these people who we, now, see in our everyday lives around us, either in the living flesh or through the media, and have no inkling of what they know and have survived of the world.

It gave me pause and made me humble in my awakening and appreciation of other people's life journeys as part of my human landscape of "rubbing shoulders". Of people, who now I am sharing my life journey with, this afternoon, in Parramatta. The contextual humour around a minor car accident where Mary attempts to find the other Australian driver's 'baby', which she is hysterically grieving over, only to find that she is grieving her car wreck not an actual baby, highlights the obfuscations of language and cultural values that is part of the everyday obstacles for these refugees. It is an incident both funny but also culturally embarrassing, for me.

This simple and direct storytelling framework and content by Ian Meadows in FOUR DEATHS IN THE LIFE OF RONALDO ABOK, is forceful because of its unsophisticated and straight forward tone of massaged verbatim extrapolations. It is the accumulated minute ordinariness of the telling knowledge of this world experience, by people we come to appreciate as extraordinary survivors of the worst that man can do to each other, that gives the work a dignity and an expansive human embrace however naive the technical gifts of the performers.

The technical support of the Sounds design and audio-visual work by Steve Toulmin, is a seamless and vitally intricate part of the artistic whole. Similarly the modest Lighting design by Tegan Lee. The presence of Wendy Strehlow working as an actor/facilitator, alongside Mr Booth, to assist the Sudanese performers in telling the main thrust of the experience is a pleasure to watch, as they modestly serve and enthusiastically support from the witness chairs on the side of the stage. This is an example of the many roles and responsibilities that true artists in the theatre can engage in. I was very proud, indeed.

Simple, direct, entertaining and enlightening. Could there be a more important use of the theatre skills of all involved? From the reaction of the audience I saw this with, NO. All our lives had grown, positively, it seemed.

Congratulations to all involved and to the Riverside True West initiative - a theatre culture involved and serving its community.
Posted by Editor at 5:02 PM